Internet Explorer 11 arriving: Browser is not over yet

When Microsoft releases Internet Explorer 11 (IE11) for Windows 7, end-users no longer using it might ask why it should bother. Microsoft still has the majority market share worldwide, but then again, which browser is dominating depends on which stats are being cited.

TNW (the next web) used NetApplications to look at browser market share and said that Internet Explorer was the dominant browser: 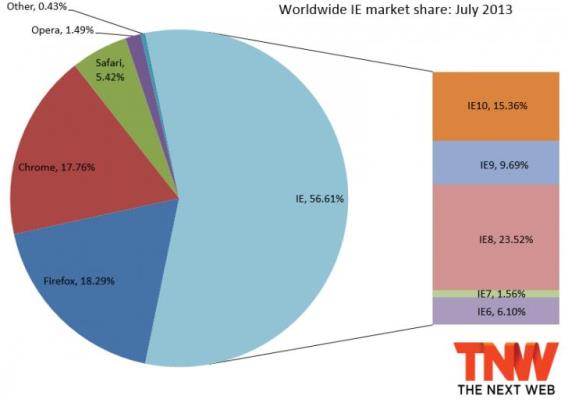 If StatsCounter data is used, Google’s Chrome is the dominant browser (at 42.68 per cent as at June 2013). Despite the discrepancies among the multitude of sources, one big question remains: will users go back to Microsoft’s Internet Explorer?

One could assume that Internet Explorer usage is really declining. Ever since Firefox first produced a faster, more efficient web browser, Google entered the browser war to take even more share. Firefox usage is starting to decline (possibly due to unreliable add-ons worsening the browser experience), and Chrome could be considered one of the faster browsers on the market.

Another way Google is aggressively pushing Chrome is through Adobe. Users updating Adobe Flash might unintentionally install Chrome if “install Google chrome browser” is not unchecked.

Microsoft recognizes that a sluggish and unreliable browser is pushing users to stop using it. Microsoft claims that IE11 will be 30 per cent faster than the next-fastest browser (which Microsoft says is Firefox), though this site might disagree. It might be a big challenge for Microsoft to win back users who switched over years ago to Chrome or Firefox. The latter browsers are also available on mobile devices, making it feel foreign for users to be using IE11 on Windows 7.

Chrome also feels like a faster browser on the desktop, but that is due to Chrome auto-loading into memory when the system boots up initially. After removing that setting, the ground is more leveled for IE and Firefox.

Chrome and Firefox both display frequently viewed sites and/or favorite sites when the browser loads a tab. On IE, Microsoft added the ability to pin sites, making it easier to access sites without finding them on a bookmark.

Like it or not, IE seems to offer more compatibility with the majority of websites. Government websites, for example, don’t always render the content properly on Firefox/Chrome, but load properly on IE.

Other features in IE11

Since IE9, Microsoft added tracking protection lists which make it easier to manage privacy. Microsoft may now claim (since IE10) to offer the safest browsing experience, according to NSS Labs. Together with a faster browser experience, Microsoft seems to be on the right track with the updated IE11.

Google’s support for cross-platform syncing could make it difficult for Microsoft to gain traction for its browser. Chrome syncs all user data across Android-based devices and on Windows. A user that has a Nexus 7, Nexus phone, and a computer running Chrome could sync the user profile across all of those platforms.