In one sign that the depression of 2008 is finally behind CIOs, more are planning to expand their teams with hiring in the next year than not, according to IT World Canada’s fifth annual Canadian CIO Census, sponsored by CA Technologies.

Despite industry trends of growing dependence on cloud services, increased automation, and line of business executives gaining more control over their technology tools, it appears CIOs are often being given the green light to expand their teams. Out of our online survey of 164 IT leaders, 44 per cent indicate they are hiring staff in the year ahead.

Following that, 32 per cent plan to keep a steady headcount, 18 per cent are in a hiring freeze, and about seven per cent are actively decreasing staff. 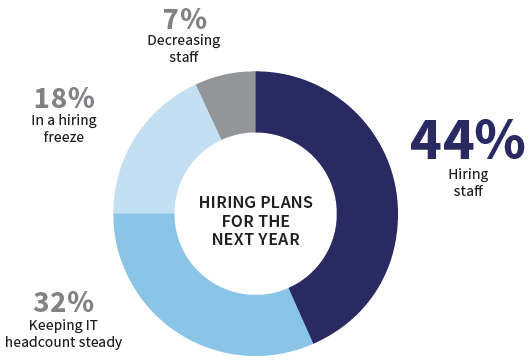 One IT leader that says he’s planning to do hiring is Kevin Newcombe, director of IT and Iovate Health Sciences International Inc., an Oakville, Ont.-based nutritional products firm. Newcombe is a member of the CIO Association of Canada (CIOCAN) and responsible for IT budget decisions at Iovate.

“We will be increasing our headcount due to the fact we’re heading into a new ERP system,” he says in a phone interview. “After the project is over, they’ll become a centre of excellence for being subject matter experts on our processes and systems.”

Iovate is planning for an implementation of Microsoft Dynamics 365, either the software as a service version or an on-premises version of the software. Two new people will be required to migrate the organization to the new system. It’s the first expansion of Iovate’s IT team, with a headcount of 16-17, in about five years.

“It’s a matter of making sure we get this project right and we understand the benefit of putting a world class system in place,” Newcombe says. “I can’t just strip away all the resources I have today.”

The CIO Census shows that the most common reasons to hire as followers:

Hiring plans 6 months back:
How Canadian CIOs plan to hire in 2017

Overall, like Newcombe, CIOs seem focused on enterprise-wide projects and the need to produce solid business results. There are some differences over last year’s plans seen in the numbers. For example, intent to hire an analytics specialist jumped 12 percentage points. Intent to hire a business analyst jumped nine points.

While the number of CIOs looking to hire is increased, it’s hard to be too optimistic given that more than half of CIOs say they are either planning to just keep a steady headcount or decrease it.

After many governments went deeper into debt in efforts to revive the economy, it may be that many public sector CIOs are now feeling the hangover effect that comes from addressing deficits. Included in that category is Sumon Acharjee, CIO of North York General Hospital, who describes his position as being in a hiring freeze.

‘The hospitals in Ontario, ours included, are under austerity measures,” he says. “We need to make due with what we have.”

In terms of IT positions that CIOs are most likely to downsize and least likely to hire for in the next year, here’s what respondents said:

How does this match up against your own IT hiring plans for the next year? Let us know in the comments section or on Twitter @CanadianCIO.

In our #CIOCensus 44% say they are hiring in the #IT department for the year ahead. Is your company doing the same?