How Canadian CIOs plan to hire in 2017

Canadian companies plan to do less hiring and more hiring freezes in 2017 when compared to their counterparts in the U.S. and the U.K., according to IT World Canada’s CanadianCIO Census data this year.

According to IT World Canada’s CanadianCIO Census 2016 conducted in March and April, IT executives in Canada, the U.S., and the U.K. have a similar approach to hiring strategies going into 2017. On average, they plan to increase headcount mainly in areas related to next-generation technologies such as big data, network security, and mobile app development. Areas where jobs may be cut include more traditional IT positions such as training, application maintenance and support, and data centre management.

Read more from the census: Taking the pulse of the community

But there were some notable differences too. For example, while 58 per cent of UK firms plan to increase IT headcount, as do 31 per cent of U.S. firms, only 22 per cent of Canadians said the same. In fact, Canada was the most likely country to say it was going to keep IT headcount stable or have a hiring freeze compared to their counterparts. That trend includes plans to hire C-level roles. 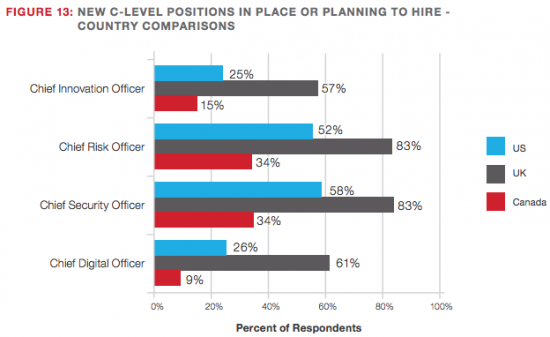 We spoke with Wilbour Craddock, CIO at eHealth Saskatchewan to hear about his hiring plans for 2017 and put a human face on some of this data. Funded by the Saskatchewan provincial government, Craddock faces the precarious challenge of hiring to meet a number of funded initiatives that require incremental staff increases while the government has publicly announced a hiring freeze to address budget challenges.

“I have an expectation to hire across three major areas in the coming year,” Craddock says. Those are:

Much of Craddock’s hiring is different from the average CIO that we say in the census results. That can be explained by the specific needs of a government agency tasked with creating an electronic health records system. But Craddock’s new developers hired to focus on API-based development are likley to find themselves coding mobile app interfaces, and the identity solutions specialists may turn to the network layer to address this.

“The decision to focus on these areas is based on a modernization of our approach to service delivery at an organizational level. To bring in a modern approach will require a change in skills and perspective,” Craddock says. “We believe we will need to have a mix of new staff as well as training for existing staff to meet this changing business model within our IT organization.”

The census didn’t include questions about training, but there’s a good chance many CIOs feel their teams need to be retrained, as dreal-timeg realtime services in a hybrid IT model requires many different skills than maintaining legacy systems. It’s also possible that many Canadian CIOs don’t plan to hire because they just don’t expect to find the talent that they really need.

“In a small market like Saskatchewan we will be challenged to find the appropriate resources with experiences,” Craddock says. “We have been successful at attracting resources from outside the province in some cases but we are traditionally pulling from a local pool in most cases.”

Like most other Canadian CIOs, Craddock doesn’t anticipate any changes at the top echelon of employment at eHealth Saskatchewn over the next 12 months.