The public listing of Twitter on the market will be a moment of triumph for the technology sector and financial backers in the company. For technology, it will drive a need to mine big data. The company that builds a tool to mine the signal from the noise will be valued.

At its infancy, Twitter was not looked upon seriously. It was thought to be limited in its usefulness and had no stickiness with its users. Early on in its history, the high rate of signups did not result in users coming back to Twitter to remain active users. This may still be the case, but Twitter still more than doubled its revenue in its third quarter to $168.6M.

What does Twitter mean in the context of the hype for Big Data? Twitter’s valuation at over $10B supports the hype in services that deliver lots of data. Twitter had 218M users posting 500M tweets a day.

There is value for corporations capable of reading trends and identifying signals from Twitter. Twitter is not just a place for marketers to advertise products, though they will benefit from marketing to a relevant target audience.

Businesses mining relevant tweets will have a source for data relevant to marketing or for operations. Small trends might be identified early. This would give retail corporations a lead over what to sell or stock up in stores. Problems in operations or customer support may be identified from twitter “noise” getting louder. For example, customer complaints on services or product quality might grow in Twitter. This would alert a corporation in fixing operational issues before it is too late, and more customers are lost.

The enormous amount of data from web searches, social media, and other places will make it much harder to mine the signals from the sheer amounts of noise. Thankfully, Hadoop will provide a way to store and process all of that data, and there will be ways to analyze it. Companies like Oracle are serious about the rise in big data. Oracle updated its Big Data Appliance, and included an update to Hadoop. It is now possible to process XQuery in Hadoop.

Big Data was touted from helping Obama win the elections in 2012 all the way to providing better medicine. It will not be known yet if this is truly all hype, but if tools in search and analysis get better, then making predictions from data will be possible. Semantic analysis and natural language search are two areas that come to mind. 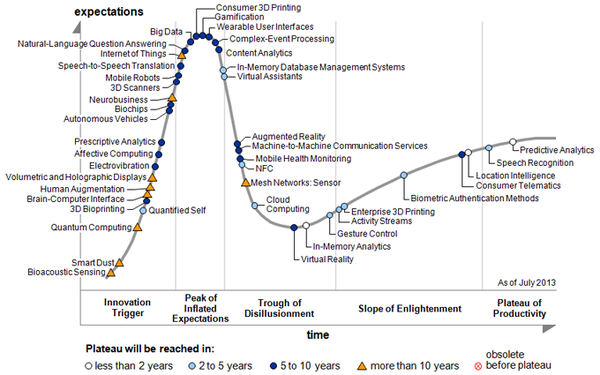 We may be early on in the hype cycle, but in the mean time, big data will be cited in solving many challenges. Here’s one: using big data to get women pregnant.

Few are covered for cyber-incidents