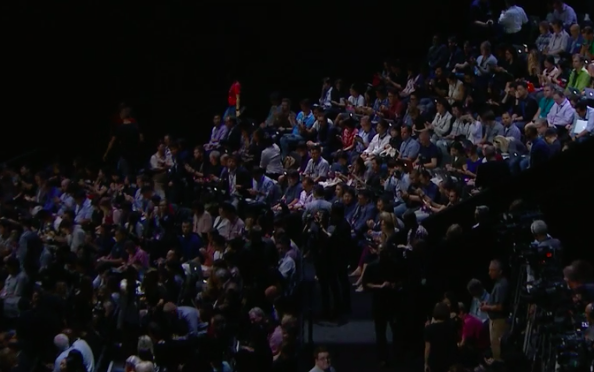 Apple chose a new venue, the Bill Graham Civic Auditorium, for its fall launch event, with a capacity of 7,000 seats. 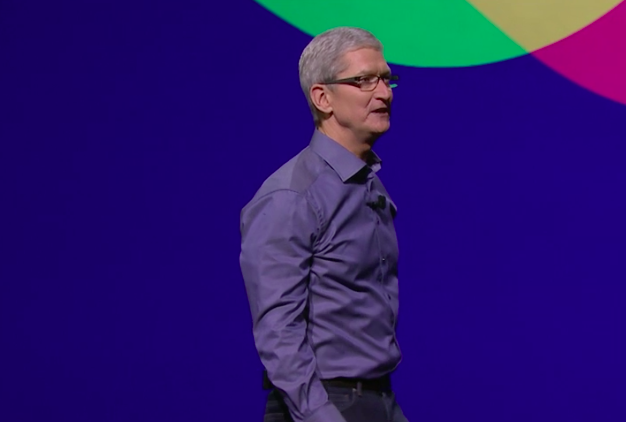 Apple CEO Tim Cook said the company was “firing on all cylinders” and promised some “amazing announcements.” 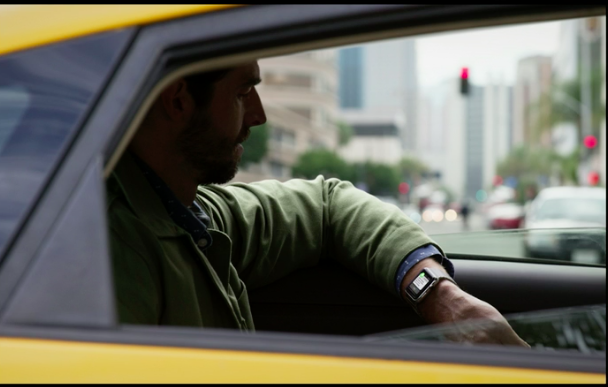 Cook claimed customer satisfaction for Apple Watch was 97%. The company is adding transit to maps on the device, making it easier to use public transportation. The company said there are more than 10,000 Apple Watch apps on the App Store. Apple said Facebook Messenger will becoming to Apple Watch, as will iTranslate and GoPro. 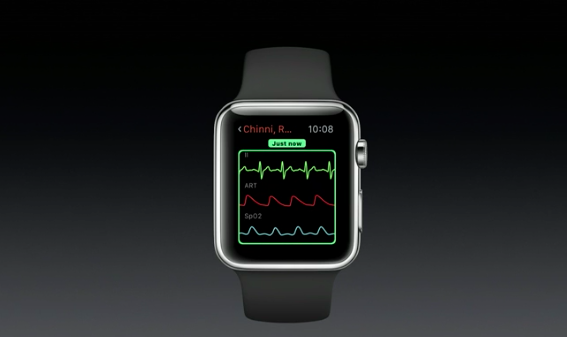 AirStrip showed how WatchOS 2 can provide health care data in real time and facilitate it between health-care providers and patients. Use case examples included home monitoring a pregnant woman’s heart rate and differentiating it from the baby’s heartbeat through the device. All that data can be sent from the watch to a doctor. 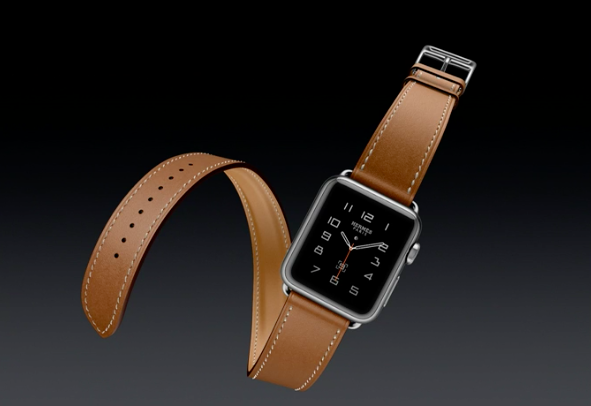 Apple said luxury watch maker Hermes would be coming out with its own version of the mobile wearable device, to be available this October. Gold, Rose Gold and Space Black Aluminum. A stainless steel case will also be available. A Fall collection of new bands will give consumers even more options, Apple exec Jeff Williams said. 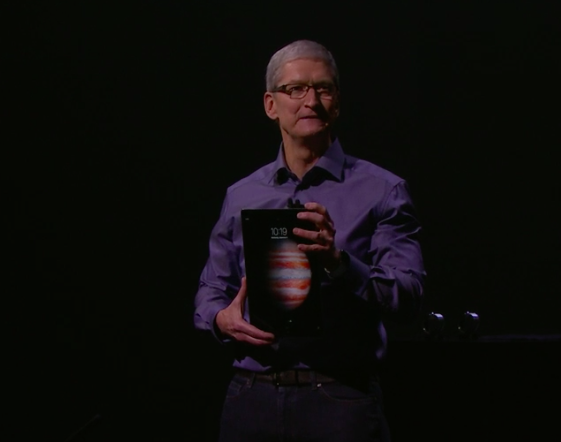 The iPad Pro, Apple’s most advanced version of its popular tablet, will include the biggest screen ever built in an iOS device at 12.9 inches, “desktop-class” performance with the A9X chip and reflects the company’s growing collaboration with firms such as IBM, Cook said. iPad Pro will take advantage of Split View and other features in iOS 9. It can also use more business-oriented applications such as AutoCAD 360. It will have 10 hours of battery life and a four-speaker speaker system. 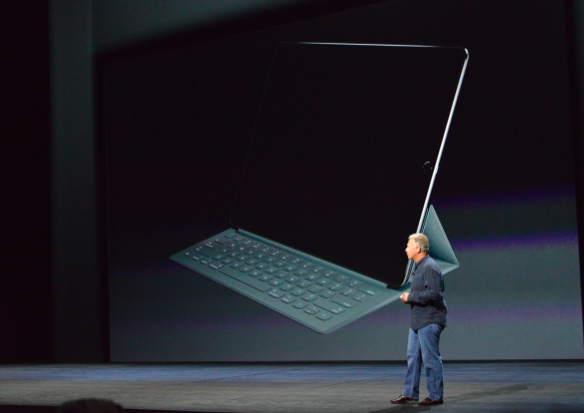 A physical keyboard, the Smart Keyboard, will be available for the device. Resembling the keyboards Microsoft offered with its rival Surface device, Apple exec Phil Schiller said it would have a “woven fabric” to create a unique texture. 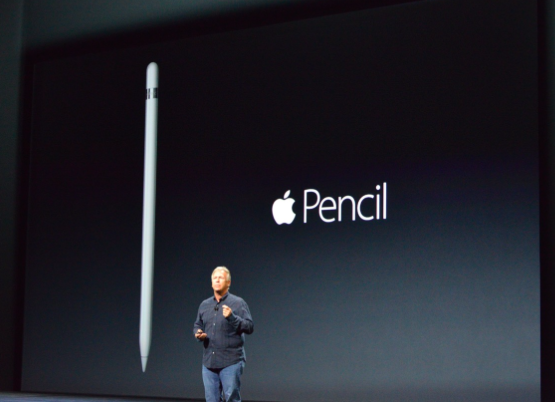 iPad Pro will also include the Apple Pencil, which may remind some users of the Samsung S Pen. It will work with the tablet to detect position, force and tilt. Schiller said developers will make use of the device in their illustration and drawing apps. In a surprise, corporate vice-president from Microsoft Office Kurt Konigsbauer showed how the Apple Pencil could be used in Microsoft Word and Excel on the iPad Pro. 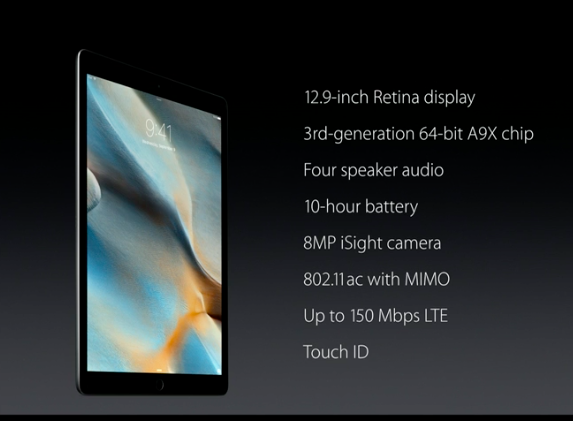 All the iPad Pro specs in a nutshell. It will come in silver, gold and space grey, with pricing from $799 to $1,079. It will be available in November. A video with voiceover from Jony Ive said the device will “enable tools and interactions that haven’t been possible before.” 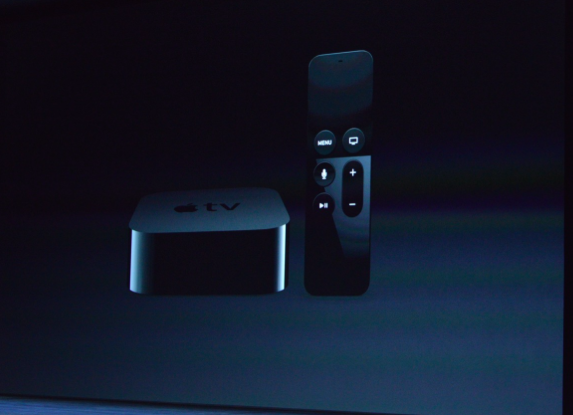 Apple also announced Apple TV, a device that will take an app-centric approach to connect consumers with content. It will offer its own app store and be open to third-party developers. It will also integrate with Apple’s virtual assistant Siri to accept voice commands such as “Show me funny TV show” and search across multiple apps. Apple TV will also include a remote control with a glass-touch surface. It also introduces a new operating system,  tvOS. Gaming and fitness apps are being designed especially for Apple TV, while an exec from Gilt showed how Apple TV would enable online shopping. 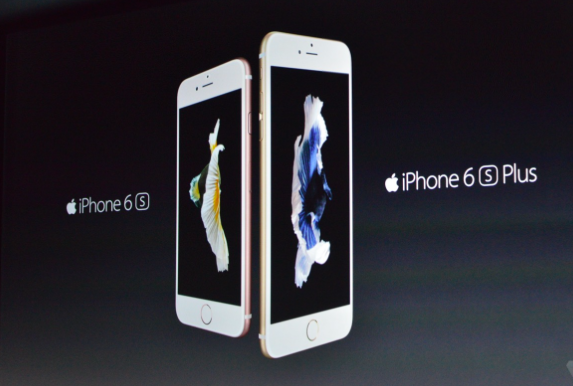 And, as expected, Apple launched the iPhone 6S and iPhone 6S Plus. Among the key features are 3D Touch, a way to recognize gestures based on the level of force behind them. Peek and Pop, for example, will give shortcuts to things users do frequently and inside applications, with capacitive sensors integrated into the backlight of the retina display.