An update to BBM (BlackBerry Messenger) advances BlackBerry’s commitment to the app. This bodes well for everyone, for both enterprise communications and messaging in the consumer space.

Blackberry posted that it tested Timed Messages and Message Retraction over the last few weeks. Both are free features, but only for the next three months. BlackBerry hopes users will find a need for these functions. The additions also bring BBM on par with features available from other apps, like Snapchat. Since the update fits nicely to the BBM suite of products, BlackBerry has the flexibility catering to differing end-user needs.

It is no secret BlackBerry wants revenue generation from the BBM suite. The company has BBM Money for that. It released BBM Voice and Video and plans a release for BBM Meetings. These features are valuable for enterprise mobile worker collaborating with each other. BBM Channels is another potential revenue generator. For now, that asset remains a “wait and see.” Companies may find value advertising its brand and communicating directly with BBM users.

Now, it is BBM’s turn for an overhaul. BlackBerry added updates that deepened the future set around privacy. It is giving customers more control over message delivery, and hopes users are willing to pay a subscription for it. The key new features are: 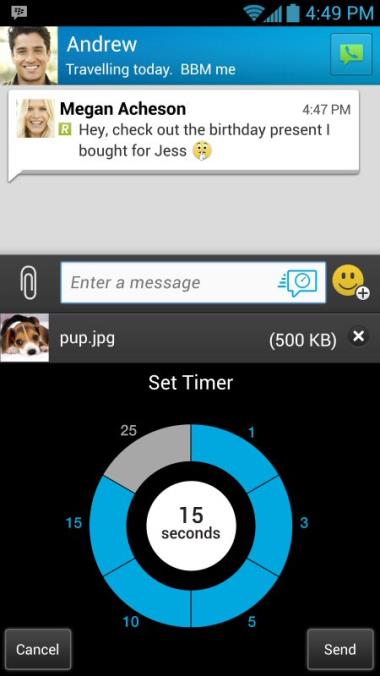 BBM users might not find that there is value paying a subscription for these functions. Snapchat and WhatsApp are some of the alternative messaging services that will likely have a lower cost. BlackBerry could charge a premium for these features. Consumers may frown when they look at what BlackBerry will be asking for. Business users will likely not care too much about a subscription fee.

The pricing structure will be tricky for BlackBerry. It could charge very little, thus gaining overall market share in the messaging market. If BlackBerry charged just five dollars for each user, that would create $100 million in revenue annually (on 91 million active users).

A more likely scenario is that BlackBerry offers different pricing packages. It could have one package that focuses on consumers and another one on the Enterprise. BBM Meetings, BBM Channels, BBM Money, and the newly added BBM features would appeal to enterprises. An ad-free BBM, with BBM Protect and BBM Voice and Video options, would appeal to consumers.

WhatsApp has yet to offer video and voice chatting, but it is working on it. BlackBerry is ahead here. Even though it is ahead by this feature, BlackBerry still needs to do much more work. In the enterprise, WhatsApp is not a strong contender to BBM. Still, winning the consumer indirectly boosts the value of BBM in the corporate world. For example, it is more useful for business users on BBM to connect with friends.

User engagement on BBM is much higher per user than on WhatsApp. BlackBerry really needs a faster rate of user growth. How BlackBerry achieves faster user growth on BBM will probably matter much more. It will be more important for BlackBerry than the revenue it expects from the new BBM.