When the Google IO developer conference rolls around, you know there’s a bunch of Android news on the way, and this year is no exception.

Sundar Pichai, Android’s senior VP, launched the big presentation on Wednesday with the news that Android now has over one billion “30-Day Active users” in the smartphone space. That means that there are at least that many discrete devices that have been active in the last month, as opposed to overall Android activations (which could double-count multiple activations for the same device, or count devices that haven’t been used for quite some time). I’m unsure whether that’s actually one billion discrete users or simply one billion distinct devices, but either way, it’s still an impressive number.

Even with a number like one billion, Google is aiming even higher with the Android One initiative. Android One is the final name of the previously-rumoured Android Silver platform, but rather than simply being a handy reference program that will allow stock Android devices to get into the hands of more people, Google is pitching it as a way to get smartphone technology into the hands of “the next billion” users, specifically in developing markets that don’t currently have easy access to current smartphone tech, because the length of the development cycle pushes what’s available in the developing market out of sync with what’s newest from a technology perspective.

The Android One program is going to launch in India later this year with three OEM partners. These new phones will all ship with standard reference hardware requirements and come with a stock version of Android that can be auto-updated by the carriers with “locally-relevant apps” via Google Play.

Pichai noted that the program will also allow carriers to keep pricing in check, detailing the specs of a good-quality phone to be available in the Indian market for under $100. 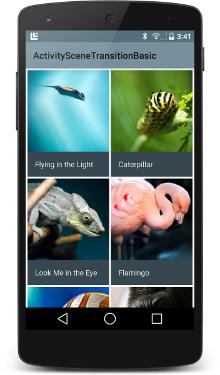 Oddly, Pichai tossed off the name Android L almost in passing near the end of his first on-stage appearance. Yes, Android L: that’s the name of the new version of the Android OS, due to hit the public later this year … no more desserty treats or candy is on show here. This leads to the question of whether Android is now going for a more sophisticated (boring) naming convention in order to be taken more seriously, or whether Lifesavers wasn’t amenable to a cross-promotion opportunity. Hm.

Matias Duarte, VP of design for Android, detailed Android L’s new look, which is known as “Material Design”. This new design language, while adopting much of the cleaner look currently found in Windows and iOS mobile devices, changes that paradigm by allowing developers to specify “elevation values” for specific items on the screen.

Put simply, that means that everything on your screen comes with virtual depth, so as to give the user visual cues as to what can be interacted with, and how. At a more technical level, it uses some of the same concepts found in 3D gaming, adding shadows and light sources to help create a screen with the feeling of depth even when the design is simplified.

As is always the case with a new OS launch, Android L will have a stinkload of new features when it finally launches to the public later in the year, and Dave Burke (Android director of engineering) showed off a few of the new features.

One immediate one was a smarter way to secure your phone. Right now, a lot of businesses require that you secure your smartphone with a passcode or PIN, to avoid sensitive data falling into the wrong hands. That makes sense when the phone has no way to know for sure who’s using it. With Android L, however, the phone can allow a simplified unlock method if it senses a Bluetooth-connected smartwatch nearby, or if it’s in a recognized trusted zone like your house. If those checks fail, it can default back to the usual security methods.

The L release will also run exclusively on the new ART runtime, improving performance across the board to (typically) about twice previous performance levels (without the need for older apps to be re-optimized for the new runtime), with full 64-bit compatibility.

Android L will also help optimize battery usage with a feature called “Battery Historian” that logs battery usage through time to measure what the phone was actually doing to cause the battery to drain. The new “Battery Saver” mode can also be engaged when battery level is getting low, saving battery power by slowing the screen’s refresh rate, stopping background data refresh, etc.

The Android team didn’t just talk about smartphones and tablets – they also detailed some new information on the Android Wear program, as well as the new Android Auto and Android TV projects.

Android Wear, which was announced earlier in the year, will bring the power of Android to smartwatches. After pairing with a smartwatch, apps that were already on your smartphone will have the potential to add extra value directly on an Android Wear watch as soon as the connection is made. These new Wear devices are designed to mesh well with Android L devices; for example, when you swipe away a notification on your watch it will go away on your phone too.

With the newly-available SDK, developers will be able to read sensor data from the watch, or allow voice commands through the watch, allowing your phone and your watch to stay synced.

Google also hopes to bring the power of Android directly to your car’s touchscreen. During a demo of the new Android Auto platform, an Android L device was connected to a car onstage; one would assume that the final version will allow Bluetooth connections instead of the crazy heavy-duty cable shown in the demo.

The Android Auto interface strips down the Android experience to the basics needed while in a moving vehicle: navigation, music and communication. With this simpler interface, it means there’s less to distract you while you’re rolling down the highway. (That said, it was curious to see that one of the features demoed was clicking the “thumbs up” icon on a music track. Seriously guys, just drive. Leave the liking-your-favourite-tunes thing until you’re safely parked.)

Thankfully, most aspects of Android Auto can be voice-controlled, which means there is little need to actually use the car’s touchscreen. While most cars with voice-control can be pretty iffy, Android Auto offers a far better natural language recognition experience. For example, saying “navigate there” assumes you want to go to the last address you were talking about; also, you can answer “sure” instead of having to say “yes” every single time, giving interaction with the system a more conversational feel.

Currently there’s partner support across the industry via the Open Automotive Alliance. That includes 25 car manufacturers, with the first compatible cars rolling off the lines later this year.

Google is also bringing more of the Android experience to the big screen with the launch of Android TV, which will replace the “smart TV” functionality in sets from major manufacturers like Sony and Sharp starting later this year. These TVs will integrate with inputs from standard TV sources like HDMI, allowing you to control standard TV functions from an app on your phone, a dedicated Android TV hardware controller, or even your Android Wear watch.

Hitting the home button will bring up a simplified “ten-foot” version of the Android launcher with content suggestions, as well as access to your apps. You’ll be able to use voice control to search for content, which means you won’t have to click and scroll your way around menu systems just to find content. And while it’s unlikely to displace Xbox or Playstation any time soon, you can play Android games on these TVs, which will be great for more casual gamers.

One other bit of news: you will be able to use these new Android TV devices just like a Chromecast, meaning you can throw a video signal from your Android mobile device straight to your big screen. (I should bloody hope so, considering one of these TVs is bound to many times the price of a Chromecast.)

The Android L Developer preview SDK is available for download here, as well as system images for Nexus 5 and Nexus 7. Developer SDKs will also be available for Android Wear, Android Auto and Android TV.

That will hopefully mean a whole generation of new Android apps on screens of all sizes by the time the general public can finally get their hands on Android L devices.