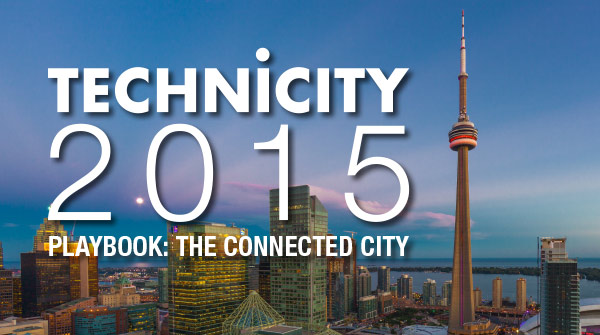 I was lucky enough to be able to attend Technicity 2015 at the MaRS building in Toronto on December 3.  The theme of the event was “Playbook: The Connected City.”  The event was very interesting for me, especially to highlight the value of the Internet of Things (IoT) to the City of Toronto.

Since other people will post photos and reviews, both before and after the conference, I thought I’d simply add my personal observations and impressions.

Just as an aside, we should keep in mind that Gartner’s 2015 hype cycle for emerging technologies places IoT at the very peak of inflated expectations.  We should therefore be expecting some very ambitious visions and grand plans, but also some questions about IoT progress in Canada relative to the USA.

My thoughts, in no particular order:

Defining the scope of IoT

Defining what is IoT, and what is not, seems to be difficult.

For example, one speaker suggested we’ve actually been using IoT for decades with bank ATMs and POS devices.  This definition, to me, would place almost any interactive system in the IoT category.

If, on the other hand, IoT is viewed as being M2M (machine-to-machine) systems that do not require direct human involvement, then these older systems would not be included.

Another definition was based on the components required, with the key factor being the addition of sensors.  For this view, IoT requires:

Yet another way to define IoT is by the class of problems it could solve.  For cities, these include urban gridlock, public transportation, road maintenance, energy costs and conservation, and enhanced water conservation.  There seems to be significant political support for applying IoT to this type of operational and structural improvements.

As I see it, we are really just expanding the reach of IT – from individual businesses and governments (1970s/80s), to personal and interpersonal communications (1980s/90s), to mass consumer networks (1990s/2000s), and finally to IoT community networks (2010s/20s).  Whether the result is called IoT or some new term is invented is yet to be seen.

There will never be any single solution, vendor, standard or definition that fully embraces all of what IoT promises.

There were some big numbers being quoted for the future of cities and for the massive scale of IoT deployment.  For example: a projection that 9 per cent of the world’s population (some 5 billion people) will reside in 41 mega-cities by 2030; and an estimate that 50 billion IoT devices will be installed by 2020.  There could also be 1.1 billion smart meters by 2022.

It will take some major technical advances for IoT solutions to work together in a highly integrated, functional, dependable and supportable manner.  Imagine if we had to face patch Tuesday for 50 billion software components!  What happens if your car (or robot) were infected with ransomware?

Whether or not these numbers are reasonable, there will need to be major investments in networks, storage and cloud services to realize the vision.  John Tory, the Mayor of Toronto, said in his video remarks that bold solutions and embracing change would be needed to build a smarter city.

There seemed to be an underlying thread related to sharing.

Some IoT technologies are inherently shared:

Shared standards will be necessary for the IoT market since no single provider can offer everything.

IoT benefits will also be shared. We all gain, directly or indirectly, from improvements in energy efficiency, reductions in water use, less pollution, improvements to health care, more access to education, and better planning for cities.

One of the pre-requisites for sharing is trust. Several speakers referred to the increasing need for trusted systems. For example, sharing a self-driving car involves considerable trust in the systems, the suppliers and even other users.

It was also suggested that one of the main driving forces for IoT is our increasing expectations – we expect better information and better experiences from our systems, and we expect technology to solve bigger problems.

World-class cities are competing to offer the best environments to live and work in – well-connected, highly automated, readily accessible, and innovation friendly. An advanced IoT ecosystem has become a differentiating factor for cities.

The rate of IoT deployment in a city depends on the urgency of the problems facing the politicians.  The major areas are modernizing transportation, improving energy utilization, avoiding water wastage, and reducing the cost of general citizen services. The benefit for individuals is a better quality of life, access to health care, economic stimulation, and public safety and security.

There are increasing expectations that technology will improve our lives on many levels.

As an example, it was not too long ago we had one telephone in our homes, with no number display, no voice mail, and no ability to move the telephone.  Today, we expect to be able to make calls while walking down the street or driving, and we have smartphones that are very powerful, location-aware, multi-functional computers.

The return on investment for new technologies is sometimes indirect, however.

It is not the individual device or sensor that yields the benefits – the data that is collected from multiple devices feeds sophisticated new apps that create value. For example, the investments in IoT made by a city can also:

Organizations, especially in the public sector, are beginning to open up their “data coffers.” Toronto is adopting an “open by design” principle that makes data accessible as the default option.

The general goal is that all data collected should be transparent and accessible (within the limits of privacy and security controls) for those who can use it in innovative ways. An “innovation ecosystem” is also emerging that will encourage collaboration with students, hackathons and start-ups.

Again, for open data, one of the key requirements is trust – data accuracy is needed, and privacy has to be assured in both the designs and in the execution. For example, the Ontario Government has decades of legacy information, but most of the datasets were not designed to separate or mask personal identification data.

The general consensus of the speakers seemed to be that many challenges lie ahead on the road to highly connected cities and the widespread use of IoT. The potential benefits for the city, however, will be huge – in buildings, on roads, in classrooms, in homes, in offices, on subways, and even in sewers.

We all have a stake in Toronto remaining competitive globally, and achieving this will require a concerted effort to embrace and exploit the emerging IoT technologies.

These were my impressions, what do you think?