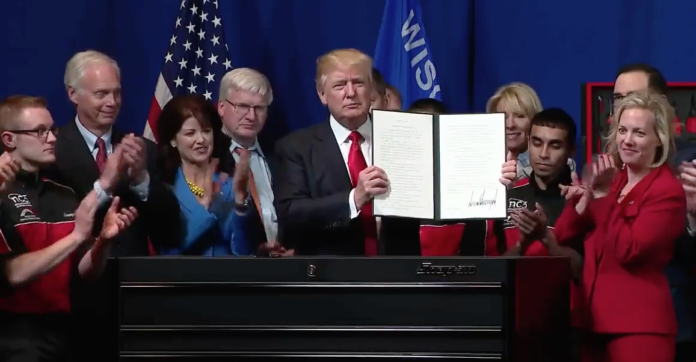 Digital transformation has become such a compelling trend that even Donald Trump is jumping on the bandwagon.

The U.S. President, who hasn’t been shy about signing a series of executive orders since taking office in January, issued one on May 1 mandating the creation of the American Technology Council. The council’s job will be one that many CIOs will be familiar with – the pursuit of digital transformation. Here’s how the E.O. frames it:

“Americans deserve better digital services from their government,” it states. “The Federal Government must transform and modernize its information technology and how it uses and delivers digital services.”

That’s the digital-first approach paired with customer focus (or in this case citizen focus) that we’re used to hearing about in digital transformation projects. Overseeing the project will be the newly formed American Technology Council, which is made up of the top U.S. government administration, from the President and Vice-President, to the Secretary of Homeland Security. But the council will also contain the director of the council, as well as a commissioner of the technology transformation service.

Former Microsoft chief financial officer Chris Liddell will be the director of the council, according to multiple reports, and one of his first activities will be to host a summit with 20 executives from the tech industry in early June. Liddell has been serving as a Trump advisor since January and works for Trump’s son-in-law, Jared Kushner as an advisor. Kushner heads the new Office of American Innovation.

According to a story on Federal News Radio, Liddell has been preparing for his new role by meeting with the CIOs of federal government agencies and departments. Given Liddell’s background as a CFO, it’s likely that he’ll be looking to find cost-savings for the government in reforming its approach to IT services. That could see everything from procurement processes reviewed, to the potential for a shared services approach to IT.

Liddell’s work with the council could precipitate Trump naming a federal CIO for the government, and a broader technology policy for the nation.

Brian Jacksonhttp://www.itbusiness.ca/
Former editorial director of IT World Canada. Current research director at Info-Tech
Previous articleFood for thought
Next articleCanadianCIO of the Year Award and Ingenious Awards nominations are open