There are few organizations these days that don’t take advantage of cloud computing, if only to use Gmail. As they add more software as a service offerings, corporate networks need a way to route and optimize traffic.

One choice is WAN optimization. Another is a solution released Tuesday by Silver Peak Inc. called Unity, which it says is an intelligent wide area network fabric that unifies the enterprise network with the public cloud. It correlates information about cloud services to intelligently route traffic over a secure optimal path, the company said, giving IT administrators the ability to monitor and control connectivity to the cloud while ensuring consistent SaaS performance. 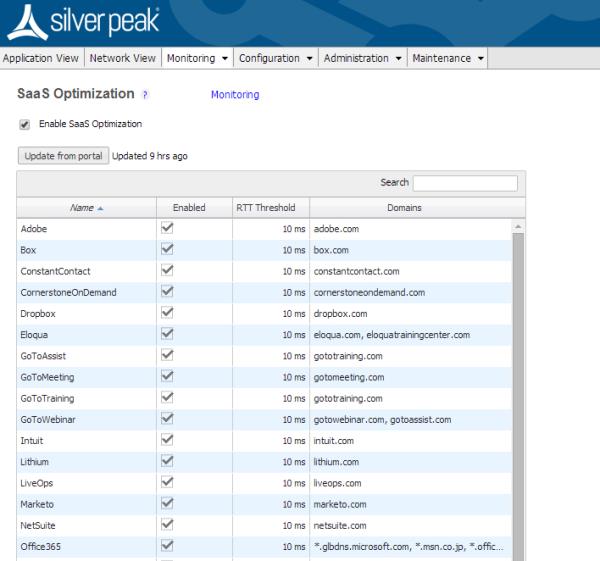 “Most enterprises use dozens of SaaS services, whether IT knows about them or not,” Silver Peak CEO David Hughes said in a statement. “That usage will only increase as enterprises shift computing workloads to the cloud. The problem is, IT staff have no insight into that traffic once it leaves the WAN. They can’t troubleshoot problems or optimize applications the way they would on their own network. CIOs don’t want to be responsible for performance they can’t control.”

Unity fabrics are built by adding instances of Silver Peak’s VX software or NX appliances in data centres, branch offices and cloud interconnect hubs, which the company describes as a network overlay that controls and accelerates connectivity to any combination of enterprise services, IaaS resources and SaaS applications. The solution also needs a subscription to Silver Peak’s new Cloud Intelligence service, which aggregates information about cloud providers and so-called Internet weather. Unity uses this information along with calculations from each instance of the VX/NX  software to dynamically route traffic to the cloud over an optimal path, the company says.

Orchestration is done through Silver Peak’s Global Management System, a Web-based platform which offers IT administrators dashboards and key metrics for management.

The Unity fabric is built on IPsec VPN security, the company says, and uses AES-256 enctryption with SHA-1 authentication. WAN compression and deduplication inspects all traffic in real time.  Applications are classified to prioritize traffic classes.

The Silver Peak Unity Cloud Intelligence subscription is US$5,000 per enterprise, per year and supports any SaaS applications.  Silver Peak software instances are available for as little as US$551 per year.

Howard Solomon
Currently a freelance writer, I'm the former editor of ITWorldCanada.com and Computing Canada. An IT journalist since 1997, I've written for several of ITWC's sister publications including ITBusiness.ca and Computer Dealer News. Before that I was a staff reporter at the Calgary Herald and the Brampton (Ont.) Daily Times. I can be reached at hsolomon [@] soloreporter.com
Previous articleJuniper adds more Ethernet switches
Next articleSUSE updates OpenStack distribution