It wasn’t your usual hike along the trails near Lake Louise, Alta. for Jeff Bollingbroke, media officer at Parks Canada, on which he got an up close and personal view with a porcupine. He looked at it. It looked at him.

“We had a couple of minutes eyeballing each other,” he says. “I hadn’t really seen a porcupine up close before. So it was amazing to record that in 360 degrees.” 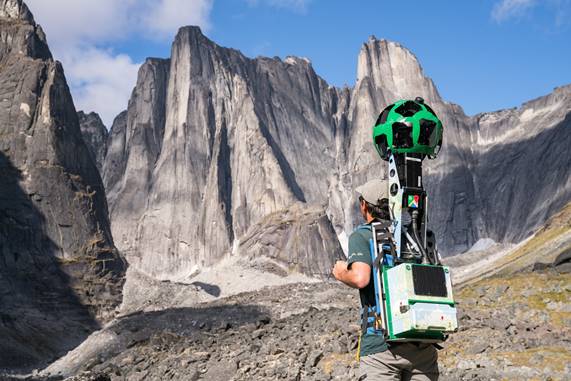 When that porcupine looked at Bollingbroke, it may have been frozen in place by the oddity of the sight. He was wearing a large, heavy backpack with thick black wiring extruding from it. Above his head, a bubble camera was stuck on a long, metal arm adorned with the Google Maps logo. All part of a day’s work for the media officer that’s helping a collaboration between Parks Canada and Google Street View, which began in 2015.

“It takes a little bit of getting used to because you’ve got a heavy backpack on,” he says. “I got to hike in these spectacular locations and think about how I was sharing them with Canadians.”

For Bollingbroke, those parks included Nahanni National Park Reserve in Northwest Territories. That was one of seven new parks added to Google Street View on April 19. It brings the total number of federal parks available on the immersive digital mapping tool to 167, covering 75 per cent of Parks Canada spaces.

Nahanni, a long way from Bollingbroke’s usual office in Revelstoke, B.C., is so remote that it’s safe to say most Canadians will never visit in person. The 30,000 square km park was uniquely unaffected by the most recent ice age. It’s jagged rocky peaks pose a rugged landscape that descends 3,000 feet into ancient river canyons.

Parks Canada captured some of Bollingbroke’s hike with this drone footage:

Using Google Street View, now any Canadian can visit the terrain in digital format. The tool is a popular app to experience on Daydream, Google’s virtual reality platform.

“We strive as much as we can to bring the experience of these natural places to Canadians,” Bollingbroke says. “That’s why Parks Canada exists, to present these amazing places.”

Another highlight for Bollingbroke during his Street View-backpack wearing hikes came in Naatsichoh, where there is a waterfall as twice as high as Niagara Falls. When the water sprays off of the rock cliff, it creates a rainbow effect that’s visible in the Street View images.

“To hear the roaring thunder of a really big waterfall and see it pouring down was a great moment,” he says.