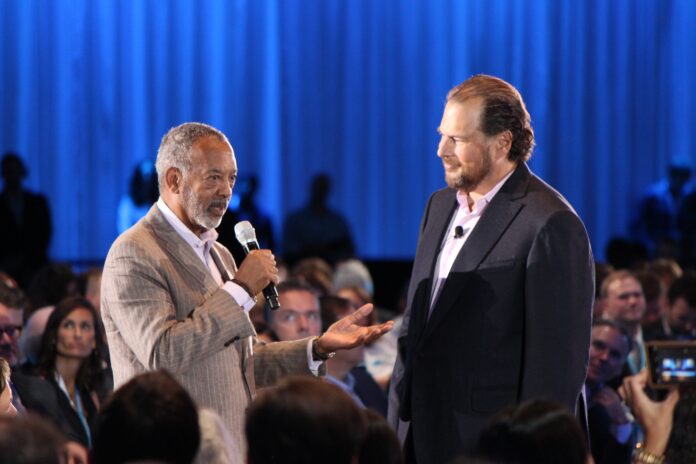 SAN FRANCISCO – Microsoft CEO Satya Nadella took the stage to demo Office products at Salesforce.com’s Dreamforce conference on Wednesday, something that you never would have predicted would happen just two years ago.

But in May 2014 the long-time CRM rivals buried the hatchet with a conference call open to media, the CEOs of both companies (Marc Benioff for Salesforce) speaking highly of the other and talking of a new era of collaboration. In addition to both becoming customers of the other, the companies promised to deliver new integrations of Salesforce into Microsoft products such as Outlook and Windows Mobile. Here, those integrations came to light.

For many companies that use both Microsoft’s Office productivity tools and Salesforce’s cloud suite in their daily processes, the integrations will be welcomed. For Doug Wotherspoon, the vice-president of international and strategic priorities at Ottawa-based Algonquin College, he sees it as an opportunity to change the culture at his organization.

In other words, rather than constantly reminding employees to login to their Salesforce dashboards, now they will see the relevant information brought to them in the email and calendar tools they already use every day. That could start to displace some at least some collaboration from email, which Wotherspoon views as an inefficient communications tool. It could also help retain institutional knowledge instead of seeing it deleted or left to die in an abandoned inbox once an employee leaves.

“Right now if you replace an employee, their email goes with them,” he says. “That corporate knowledge is lost.”

Here’s a rundown of forthcoming integrations for Salesforce and Microsoft:

Via a partnership with Alpine Metrics, Microsoft has enabled its Cortana Analytics Suite to work on top of the Salesforce Sales Cloud and receive voice inquiries from users. Nadella, opting to demo a range of new software features live on stage, tried to demonstrate the new capability by asking Cortana “show me my most at-risk opportunities.”

Cortana misinterpreted, thinking Nadella was looking for a reminder to buy milk. After two more unsuccessful attempts, his backstage team was able to call up the Salesforce screen intended.

Beyond the voice queries, Microsoft will be providing dashboards and charts from Power BI to deliver sales forecasts, calling on the predictive analytics power in the Cortana Analytics Suite. “One of the most subjective things in the world is salespeople’s estimates of their ability to close a deal,” Nadella remarked.

Skype for Business and Lightning

Skype for Business will be tied into the new Lightning user interface in Salesforce. From within Salesforce, users will be able to use Skype for Business to create web meetings, see online presence of colleagues, and click to chat or make calls. Office 365 will be required and the preview is planned for the second half of 2016.

Salesforce users can now associate their OneNote notes with Salesforce records. Also, view and edit directly in ONeNote from within the new Salesforce Lightning user interface. This feature is planned to release in preview mode for the second half of 2016.

Users of Office 365 that use Delve will be able to see Salesforce content like sales opportunities, customer accounts and service cases. Availability is slated for the second half of 2016.

Just as an app on Android and iOS is currently available, Salesforce will be releasing Salesforce1 for Windows 10 mobile devices. It is planned for release – you guess it – in the second half of 2016

Brian Jacksonhttp://www.itbusiness.ca/
Former editorial director of IT World Canada. Current research director at Info-Tech
Previous articleIs this ‘rule of 10’ a good way to justify the role of a CIO?
Next articleMicrosoft’s assistant general counsel gives his verdict on moving the cloud