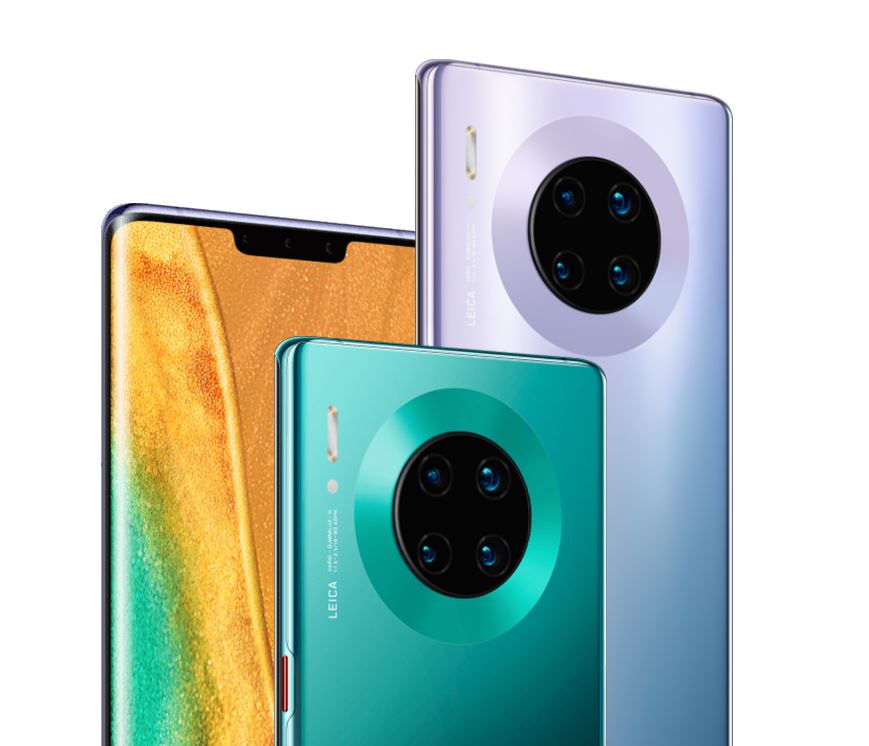 Huawei today officially launched the Mate 30 and Mate 30 Pro in Munich, Germany without the Google Play Store. Canadians looking to get their hands on them are out of luck – for now.

Huawei has two parallel flagship phone series with staggered release schedules. The Huawei Mate series features Huawei’s latest innovations technology and can be seen as a testbed for everything that’s bleeding edge. On the other hand, the Huawei P (P stands for photography) series prioritizes camera performance above all else.

Featuring a new edge-to-edge 6.53-inch OLED display, the Mate 30 Pro is virtually all screen. It’s attractive indeed, but some may gripe about the curved display being harder to hold. Despite its large viewing area, its 2,400 x 1,170p resolution trails behind other flagships like the Galaxy Note 10 Plus. With that said, it isn’t all negative, as lower resolution usually means longer battery life.

For the Mate 30 Pro, Huawei has eliminated a physical volume rocker and instead blended it into the display’s curved edges. To adjust volume, the user needs to double-tap on either side of the phone to summon a volume slider. Not all buttons are gone, however, as a thin power button still sits on the left edge.

The Mate 30, on the other hand, actually has a slightly larger 6.62-inch OLED display set at 2,340 x 1,080p. That’s because its edges aren’t curved (Huawei calls it Full View) and feature the standard volume rockers and a headphone jack, which the Mate 30 Pro omits.

Contrary to Huawei’s previous efforts to shrink the notch, the Mate 30 series features one that’s wider than its predecessors. Huawei reasoned that the notch is justified since it has more functions than its competitors.

Inside the notch are an image sensor, two depth sensors, an ambient light sensor, and a new gesture camera. The gesture camera lets users command their phones by performing hand yoga in front of it and is analogous to the LG G8 ThinQ’s gesture controls. The front camera also supports face unlock and other AI-powered camera functions.

If space exploration advanced at the pace of smartphone cameras, we’d already be living on Mars. For the Mate 30 series, the center-aligned camera bump is back, this time in a circle instead of a square like the Mate 20.

The Mate 30 Pro’s new camera array consists of four cameras: a 40MP f/ 1.8 Cine Camera, a 40MP f/ 1.6 SuperSensing camera, an 8MP f/ 2.2 telephoto camera, and 3D time-of-flight depth sensor. The 40MP Cine Camera introduces a mind-blowing 7680 fps ultra-slow-motion shooting mode. While it sounds impressive, we’ll reserve our opinion until we can get our hands on one–if we do, that is. The main 40MP SuperSensing camera uses the same RYYB sensor on the P30 Pro, which has been praised for its excellent low-light shooting mode.

Although they sport the same resolution, the two 40MP sensors aren’t the same size. The Cine Camera is 1/1.54-inches, while the SuperSensing camera is 1/1.7-inches. During the presentation, Huawei compared the Mate 30’s sensors sizes against its competitors, stating that their bigger sensors deliver superior performance.

The Mate 30 also features triple cameras albeit in a different setup. It features a 40MP f/ 1.8 SuperSensing camera, an 8MP f/2.4 telephoto with optical image stabilization, and a 16MP f/ 2.2 ultrawide camera.

Interestingly, Huawei didn’t try to push RAM capacity. RAM and storage start at 8GB and 256GB respectively for the Mate 30 Pro, and 8GB and 128GB for the Mate 30. Their storage can be expanded by up to 256GB through adding a Huawei Nano Memory storage card.

On the topic of battery life, the Mate 30 Pros carries a massive 4,500mAh cell. The Mate 30 has a slightly smaller one set at 4,200mAh. Huawei pairs both with a 40W charger that can fill them up from zero to 70 per cent in 30 minutes.

Canadians buyers will have to be patient. The Huawei Mate 30 Pro and Mate 30 will be available for pre-order in China starting today and ship on Sept. 26, followed by other parts of Asia including Malaysia, Philippines, Singapore, and Thailand sometime after October. Huawei does plan on launching the phone in Europe, but a spokesperson told IT World Canada that “sales plans for other markets are not confirmed yet.” The Mate 30 Pro 5G launched today at EU$1,199, the Mate 30 Pro at EU$1,099, and the Mate 30 at EU$799.

No Google, no Play

Wondering why Huawei is on the fence about bringing this phone to Canadians? Two words: Play Store. However tantalizing the phone may be, lacking Google’s Play Store and other Google apps severely damages the Mate 30s appeal. Even EMUI, Huawei’s mobile operating system, is based on an open-sourced version of Android 10.

Fingers crossed that the phones make it across the Pacific ocean.

Tom Li
Telecommunication and consumer hardware are Tom's main beats at IT World Canada. He loves to talk about Canada's network infrastructure, semiconductor products, and of course, anything hot and new in the consumer technology space. You'll also occasionally see his name appended to articles on cloud, security, and SaaS-related news. If you're ever up for a lengthy discussion about the nuances of each of the above sectors or have an upcoming product that people will love, feel free to drop him a line at tli@itwc.ca.
Previous articleTech companies need to allow remote work to compete in global tech landscape, says Hired CEO
Next articleHashtag Trending – Huawei Mate 30 phones; Scotiabank data leak; Amazon buys electric trucks