Top executives from North American and Asian companies doing business and investing in the Asia Pacific region are in the sights of a cybercrime ring hacking into hotel Internet networks to steal passwords and industrial secrets, according to security software maker Kaspersky Lab.

“For the past few years, a strong actor named Darkhotel has performed a number of successful attacks against high-profile individuals, employing methods and techniques that go well beyond typical cybercriminal behaviour,” according to Kurt Baumgartner, principal security researcher at Kaspersky Lab.

Over the years, the gang has been able to embed and maintain intrusion tools inside hotel networks, even those that have been considered private and secure. The crew goes after well-selected executives and never go after the same target twice, according to the report.

Once a victim connects to the hotel’s Wi-Fi network and submits his room number and surname during login, the victim is tricked into downloading and installing a backdoor that is masked as an update for legitimate software such as Adobe Flash, Google Toolbar or Windows Messenger. The company warned that Darkhotel attacks are still evolving. 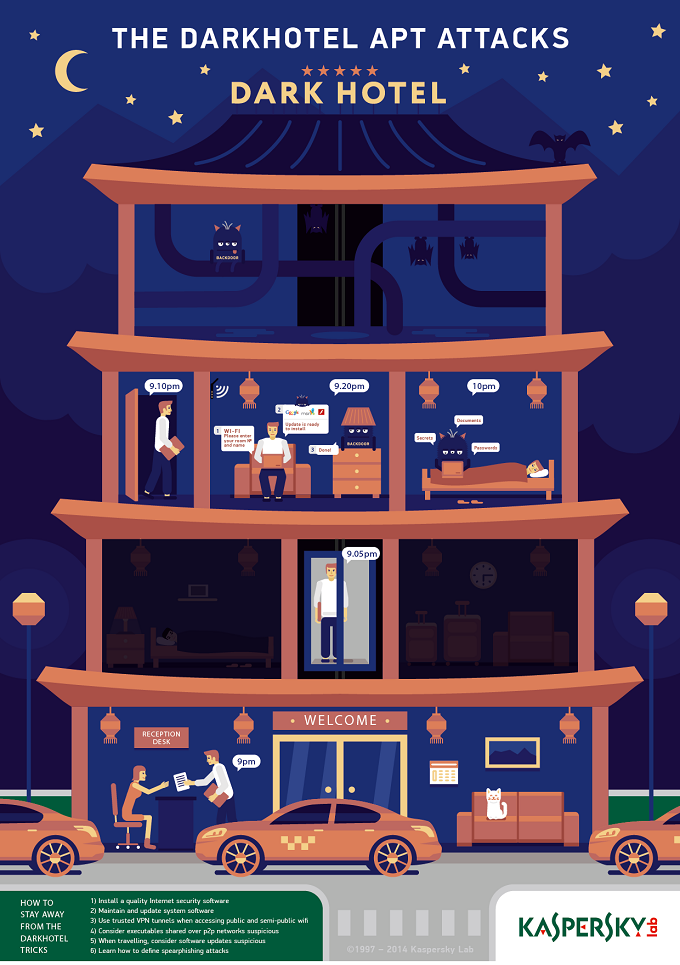 The “welcome package” is actually surveillance software that downloads other data collection tools such as key loggers, the Trojan Karba and an information stealing module. The tools track keystrokes and search for cached passwords in Chrome, Firefox, Gmail and Internet Explorer as well as login credentials for social networks like Facebook and Twitter.

Kaspersky said it has products that can detect and neutralize malicious programs and their variants used by the Darkhotel attackers.

In the course of its investigations, Kaspersky said its researchers uncovered a “footprint” left by the attackers in a string of malicious code that “pointed to a Korean-speaking actor.”

Kaspersky recommends that travellers should view any network, even those that are semi-private, as potentially dangerous.

To minimize the exposure, the company said travellers should: