Canadian CIOs poised to ramp up IT hiring next year

The majority of chief information officers (CIOs) in Canadian firms plan to hire more people in order to beef up their departments according to a survey released by recruitment firm, Robert Half Technology.

The IT Hiring Forecast and Local Trend Report released by the company indicated that 73 per cent of local CIOs intend to expand their IT teams in the first six months of 2015. The survey also found that 12 per cent of CIOs expect to put hiring plans on hold while three per cent plan to reduce IT staff levels during the same period.

The report is based on interviews with more than 270 CIOs from major Canadian markets who were asked to provide their six-month hiring outlook.

The number of CIOs looking for more staff in 2015, represents a three-point increase over a previous Robert Half survey released in June this year which indicated that 14 per cent of Canadian CIOs expect to expand their IT teams in the final half of 2014. 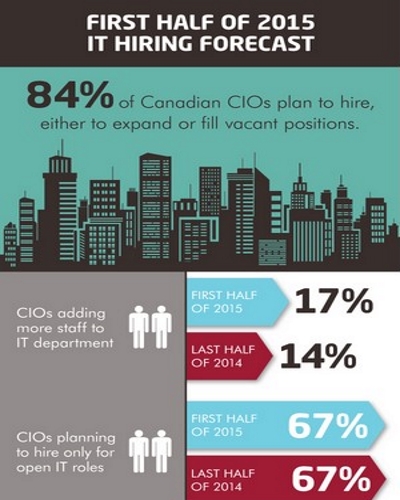 “The current competitive hiring environment will continue into the first half of 2015 as the supply of highly skilled technology professionals remain below demand,” said Deborah Bottineau, senior regional manager at Robert Half. “Mobile, big data and security are the key areas driving hiring as IT departments expand in these areas.”

She said Canadian firms currently have opening in the following is areas such as desktop support, wireless network management and Windows administration should “start acting with urgency” in recruiting for these skills because they are the in greatest demand at the moment.

Sixty per cent of CIOs indicated that desktop support is among the skill sets in great demand within their IT departments. This was followed by wireless network manager (59 per cent) and Windows administrator (58 per cent).

Fifty per cent of CIOs said it is “very challenging” to find skilled IT professionals. This number is a 23 per cent increase over results of the June survey.

IT Executives said it it most difficult to find skilled talent in consulting and systems administration (14 per cent), database management (12 per cent) and security (11 per cent).

Despite this a majority of CIOs (73 per cent) reported they were confident about their companies’ growth prospects for 2015. Still, the score is nine points below that of the previous survey.

As many as 21 per cent of respondents said they expect their firms’ IT budgets to increase next year and 55 per cent said they plan to expand investments by up to 20 per cent.

As many as six per cent anticipate a budget increase of between 21 to 30 per cent.

“2015 is looking bright for IT pros,” said Clea Badion, editor of RHT blog.