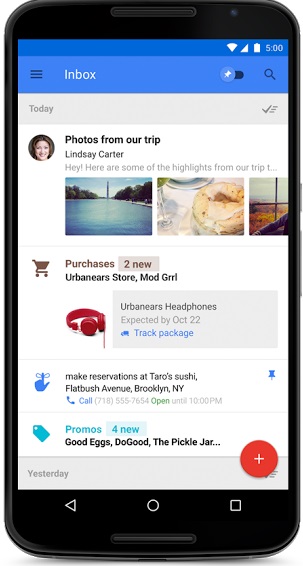 A number of organizations have shifted to Google Gmail for several reasons: Hoped for improved security over a client-based mail application, not wanting to deploy a client at all or ease of use for a largely mobile workforce because it’s totally Web-based.

On Oct. 22 Google announced a new and (it hopes,) improved version for trial called Inbox, which may or may not replace Gmail. The company is being coy, saying it’s not Gmail, nor is it saying Inbox will be offered separately. Presumably Google will make a decision based on feedback of users.

Over the weekend two columns have appeared taking opposite views of the suite, whose goal is to organize the raft of information collected. Before I summarize them, a brief description of features offered by Inbox:

–It expands categories introduced in Gmail last year, making it easy to deal with similar types of mail all at once. For example, all online purchase receipts or bank statements are grouped together.

–It highlights  key information from important messages, such as flight itineraries, event information, and photos and documents. It will display related information from the Web that wasn’t in the original email, such as the real-time status of a flights and package deliveries.

Is it for you? Yes, says Mike Elgan, of Computerworld U.S. in a “letter” to Inbox: “Your to-do list and email integration is a joy. Your Material Design is so easy to look at. Not only are reminders integrated into the email system, the email system itself is treated like to-do items. When you’re done with either an email or a reminder, it doesn’t feel like you’re deleting email. It feels like you’re checking off a to-do item or filling something away for later.”

No says Mark Gibb of Networkworld U.S.: “I’ve been using Google’s Inbox by Gmail app and web interface for a few days now and I’m pretty certain that it’s not an improvement over Gmail. That’s not to say Inbox is actually bad; just that it doesn’t really make handling large quantities of email any easier … in fact, it can actually make it harder! Plus it has a bug (or an oversight depending on your point of view) in the iOS (version) that is, at least, a deal breaker for me.”

At Time.com, Alex Fitzpatrick says Inbox treats mail as a to-do list: “Instead of marking messages as “read,” Inbox lets you cross off items once you’ve accomplished whatever task was asked of you in them.”  On the other hand, he notes that Inbox doesn’t work with the enterprise Google for Work apps. For the time being, that’s a killer for organizations.

Read the reviews, then give it a try.