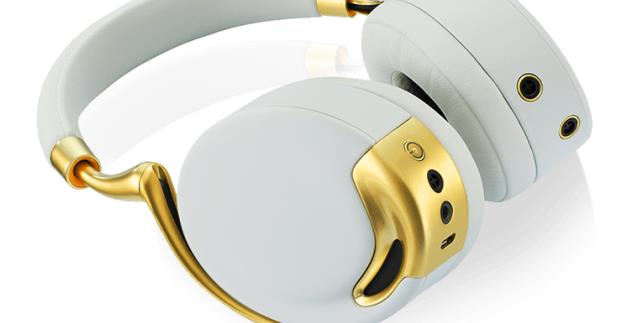 Sure, your Android smartphone or tablet can be a lot of fun all by itself, but sometimes it’s good to have some travel companions to add to the fun. Here are a few things you may want to pair up with your mobile device.

Designed by Phillipe Starck, the noise-cancelling Zik headset can be connect to your mobile device via the standard Bluetooth connection process, or by NFC tapping (if your mobile device supports it). A swipe of a finger on the right ear’s touch panel and you can change your volume or switch tracks. Take the headset off your ears, and your music will be automatically paused. And of course the Zik acts as a hands-free headset for your phone calls; it comes with bone conduction technology for better voice quality. And when your battery finally runs dry, there’s also a detachable wire that you can plug directly into a headphone jack.

Yes, at $399 it’s a bit pricy, but the Zik packs in a ton of style and quality. It comes in four colours.

Parrot Flower Power
Parrot’s connected devices are even stranger than drones and headphones: how about a plant monitor? The Flower Power is one for all of you who have a plant somewhere in your office but have absolutely know clue how to keep it alive. (That means pretty much everyone, right? Right.)

After connecting the Flower Power to your device via Bluetooth and choosing the type of plant you want to monitor, you stick the two sensor rods into the soil next to the plant. It measures the water level of the soil, how much sun your plant is getting, and whether the fertilizer level is okay. You can monitor your plant in real time, or you can set up the app to give you alerts when things are looking grim for your plant (ie., it needs water, or isn’t getting enough light).

Nomad NomadKey / NomadCard
One of the problems you’ll invariably have when you’re carrying around a smartphone or tablet is running out of power, especially since carrying around your power brick can be pretty inconvenient. If you’re always going to be near a computer with a USB outlet, though, Nomad has some compact adapters that will help get your devices topped up again.

The NomadKey is about the size of your little finger, with a USB connector on one end and a Micro-USB on the other; in-between there’s a flexible one-inch rubberized connector. There’s a loop on one end for attaching it to a keyring, if you’re so inclined.

The NomadCard is about the side of a credit card, with the USB connectors tucked into the hard plastic shell of the card when not in use. Again, the connectors are flexible and rubberized to provide a bit of durability, which you’ll probably want if you’re tucking this away into your wallet between uses.

Both Nomad cables retail for US$29; updated versions are expected in November.

TP-LINK Power Bank
Speaking of power, TP-LINK’s Power Bank might be just the ticket if you typically run down your phone or tablet before the end of the day. While TP-LINK is probably best know for its line of networking devices, it’s now entering the external battery market with a value-priced device … with an offbeat twist.

First things first: this 10,400mAh battery isn’t a boxy chunk of ugly: it features a fairly attractive round-edged design with an upright-orientation. That means it’s not jabbing into your thigh if you’re keeping it in your pocket, and minimizing deskspace when it’s out of your pocket. There are two USB ports, so you can charge both your phone and your tablet simultaneously. As for the offbeat part: there’s also an LED light on the top that also doubles as a surprisingly bright flashlight.

Like many of the other portable batteries, this one comes with a single USB cable, but no transformer for recharging directly from the wall. Since it’s a micro USB connector, you can generally charge it up with your phone’s charger, or by connecting it to your computer using the included cable (although it’s worth noting that charging from your computer or notebook’s USB port will generally take longer).