What’s the next programming language you need to learn?

Many Canadian educators say learning more than one language is a great way to add flexibility to a career.

The same could be said for learning programming languages.

But if you already have one (or more) what’s next? According to a blog for Toronto-based Stafflink, which places IT personnel mainly in southern Ontario, the languages most in demand from its customers these days are Python and Ruby.

That’s not necessarily definitive, it admits. A site called CodeEval, which runs app building competitions so programmers can show off their skills, lists Python as the most popular language, followed by Java and then Ruby. 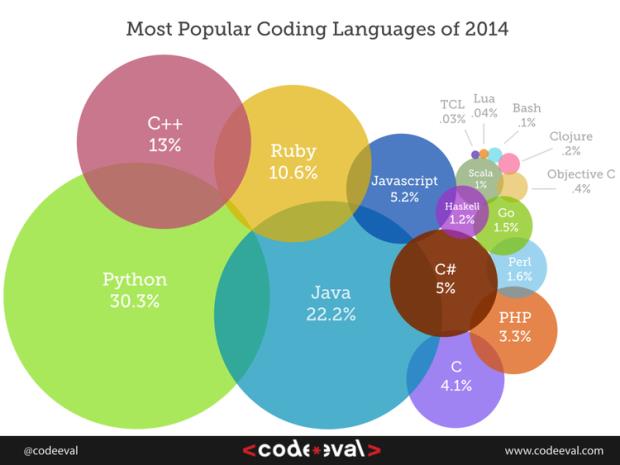 The TIOBE Programming Community Index, which rates the popularity of programming languages in a different way, suggests C and Java are virtually tied, followed by Objective-C, used for building iOS  and OS X apps.

Complicating this is the new Swift programming language announced by Apple last month. A TIOBE blog  predicts it will be in the top 20 languages this month.

The Stafflink blog also includes a number of useful links to start learning any of the top 10 languages online for your next career jump.

Howard Solomon
Currently a freelance writer, I'm the former editor of ITWorldCanada.com and Computing Canada. An IT journalist since 1997, I've written for several of ITWC's sister publications including ITBusiness.ca and Computer Dealer News. Before that I was a staff reporter at the Calgary Herald and the Brampton (Ont.) Daily Times. I can be reached at hsolomon [@] soloreporter.com
Previous articleWorry over ransomware picking up, study suggests
Next articleWhy aren’t we bothering you with a notice about the CASL compliance?