Canadian politicians get good marks in taking advantage of the Internet in broadcasting their message to the people. However, they are failing miserably in offering constituents the opportunity to become engaged in the political process, according to a recent study.

Between August and September this year, Samara Canada, a non-partisan organization working to improve political participation, visited the Web sites of Canadian Members of Parliament and conducted a 14-point check-up of the sites. Samara graded the sites on variety of metrics including:

“Members of Parliament are great at offering their constituents the basic information about themselves, but they perform poorly in offering ways for Canadians to engage with politics or have input in policy decisions,” Samara reported. “While MP’s Web sites, on average, include 7 out of 14 items on the checklist, only three Web sites checked off 12 items, and none encompassed all 14.” 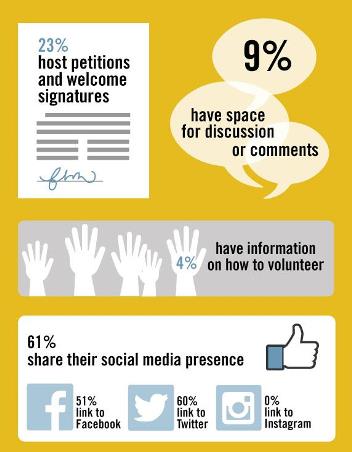 Samara also found that five MPs appear to have no Web site at all.

MPs are good at reporting about their work. About 75 per cent of the MP’s Web site contains information on their work on Parliament Hill and 65 per cent talk about work in their riding.

Sixty per cent of the Web sites contain the MP’s calendar of events and 63 per cent describe what services the MP’s office provides.

The study also found that score differed along party lines. Here’s are their scores from highest to lowest:

MPs aged 35-44 tend to have more complete Web sites. Female MPs’ sites lead over their male counterparts “but only by a hair,” Samara said.

Web sites for MPs in British Columbia were “marginally better” than those from other parts of the country, according to the report.

Want to know which MP has a hologram of himself in his Web site, which NDP MP has turned pink, who really likes Pinterest and who has cornered the market on petitions?