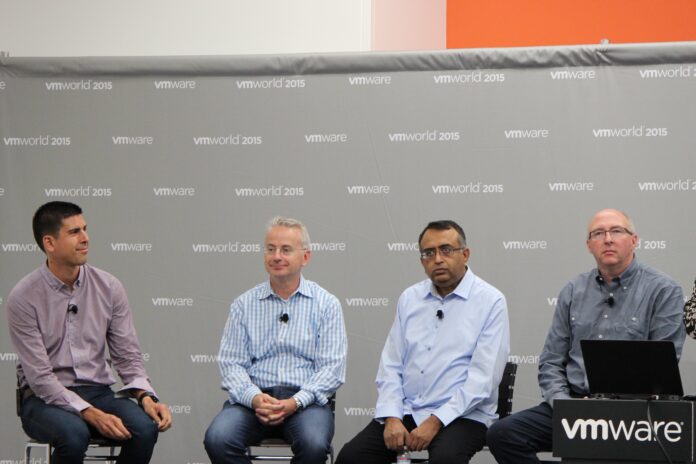 VMware Inc. championed one clear vision for IT at its annual user conference in San Francisco last week – the ability to securely run any application on any device, running any OS, at any time.

“We believe at VMware the best ay to deliver freedom, flexibility, and choice is through a one-cloud, any-platform, any device architecture,” said Carl Eschenbach, president of VMware, during his opening keynote. “We want to give you seamless integration between your private cloud and public cloud.”

The virtualization vendor proceeded to announce a series of ways it will deliver this for its customers, including two major new capabilities that weren’t previously available for those in the VMware environment:

vSphere Integrated containers launched as a technology preview earlier this month. It supports running containers made with CoreOS Tectonic, Docker, Cloud Foundry, Kubernetes, and more. Its capabilities include booting up each container application within a virtual machine via the Instant Clone feature of vSphere 6 to ensure security, and the ability to use vCenter Server to view and manage the containers.

It all comes together to offer the best of both worlds, according to VMware execs, and removes the need to choose between running a virtual machine or using containers.

To run the unified hybrid-cloud infrastructure that VMware championed at VMworld, an IT department would need several pieces of the VMware stack. Core to the infrastructure is the vCloud Air public cloud service offered by the vendor for disaster recovery, storage, and relational databases. From there, a software-defined datacentre running NSX version 6.2 and management console vRelaize Operations 6.1 help complete the picture.

A unified hybrid cloud model “represents a way to solve some of the toughest challenges you’re facing today,” says Bill Fathers, vice-president and general manager of cloud services at VMware. “VMware is well ahead of the curve in anticipating the challenges that hybrid apps would present and solving them.”

To understand how these new capabilities might make an impact for VMware users, we spoke with Jay Benson, a manager of IT architecture for eHealth Saskatchewan. Benson manages the organization’s environment, a 60/40 split between VMware, Windows-based virtualized  and mid-range Solaris. In the process of laying out the foundation of the EMC Federation’s hybrid cloud infrastructure, Benson runs on the VMware stack such as vSphere and vCentre.

Whether running a container within a virtual machine on a software-defined data centre constitutes virtualized inception or not, Benson says it would help him manage his heterogeneous environment split between VMware and Solaris.

“I have to train people to manage both platforms,” he says. “As a technician if I’m flipping back and forth between those environments… I’m spread thin a little bit.”

Since the healthcare industry has lengthy testing cycles for implementing new technology, Benson sees containers run on a virtual environment as a future roadmap type of item.

“If I can standardize things on one platform, I can take those people and keep that one thing running,” Benson says. “Containers can help us do that.”

One cloud to rule them all

Since Benson is dealing in the healthcare industry, and specifically looking to digitally store the health information of Saskatchewan residents, he has a lot of compliance standards to meet and security is high priority. Still, he is looking to support 40,000 employees across 13 health regions on a virtual desktop infrastructure and that’s why he’s looking to build a private cloud. But he can foresee a future where he’s supporting even more users (i.e. the public) and would need to add some public cloud services into his IT mix.

“As we enable patients to access their own data and records the scale of things becomes more interesting,” he says. “I can see certain point solutions falling to the public cloud.”

For example, public cloud could support identity access management for users, while Benson’s datacentres still store the patient data to maintain regulatory compliance. It would be a lot of work, he says, but having the ability to move certain workloads off-premises would be attractive.