Intel Corp. is going after the binge watchers with the first round of 8th Gen Intel Core processor-powered devices.

Desktops, laptops, and 2-in-1s featuring i5/i7 processors will be hitting the market this week, perfect for students who have put off their back to school computer purchase and those who want to stream 10 hours of their favorite show in 4K video, said Elaine Mah, director for Canada at Intel. In addition to lower power consumption that extends battery life of devices, users will see a noticeable performance boost of 40 per cent, she said, representing the biggest jump between generations. “There will be a discernable difference for users when they pick up a new system.”

The improvements come from a combination of the doubled core and thread count, as well as design and manufacturing improvements, such as higher clock speeds. Intel’s product brief highlights I/O support that includes PCIe 3.0, delivering data transfer rates at 8 GT/s versus 5 GT/s with PCIe 2.0, as well as its Rapid Storage Technology that supports NVMe PCIe x4 Solid State Drives.

The 8th Gen processors are slated to roll out throughout the fall, with the first desktop processors coming in the fall, followed by processors for enterprise customers. Mah said the PC has become an entertainment hub as more Canadians cut the cord, watch 4K video streams and begin to adopt virtual reality (VR) and augmented reality (AR) technologies. Other activities to benefit from the 8th Gen Intel Core processors include photo editing and creating slideshows, which will see a 48 per cent faster experience, according to Intel.

Mah said the 2-in-1 form factor tends to be one of the strongest growth areas for PCs in both business and consumer markets. “It provides versatility. Because we deliver both performance and battery life, it makes the 2-in-1 very desirable.” 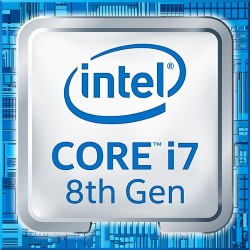 Meanwhile, 8th Gen Intel Core vPro processor-based laptops will hit the enterprise market early next year, she said, with wireless management being a key feature. Security has been improved by scaling existing features for identity and data protection down to the silicon level on top of the usual base platform security. For example, the Intel Authenticate Technology hardware-enhanced Multi Factor Authentication (MFA) will have facial recognition as another authentication factor, along with existing factors of PIN, Bluetooth technology proximity, fingerprint, and AMT hardened location.

Devices with Intel’s 8th Gen processors are hitting the market as worldwide shipments of traditional PCs, including desktops, notebooks and workstations totaled 60.5 million units in the second quarter of 2017, according to IDC’s Worldwide Quarterly Personal Computing Device Tracker released in July, which represented a year-on-year decline of 3.3 per cent.

In May, the research firm forecast that commercial notebooks and detachable tablets will push growth upwards in the personal computing device market in 2019, but in the shorter term, worldwide shipments of personal computing devices comprised of traditional PCs, including desktop, notebook, and workstations, as well as tablets, both slates and detachables, are forecast to decline from a total of 435 million units in 2016 to 405.2 million units at the end of the forecast period in 2021.