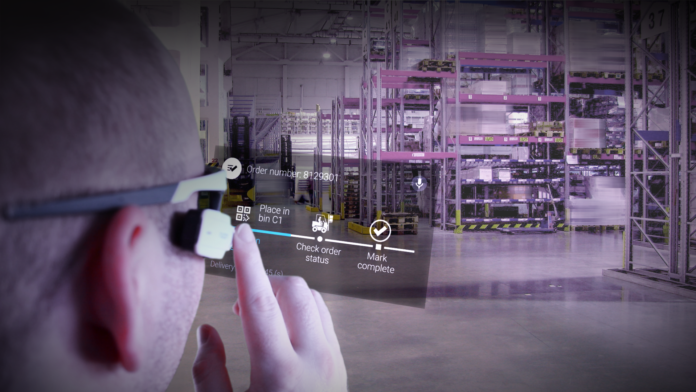 “We’ll try all of them,” Boris says, who sits on the board of Vuzix himself. “The device is at some level a commodity, it’s just a mechanism for serving the data in the right context.”

Last year, GE launched its Wearables Challenge asking employees to deliver their best use-case scenario for using AR headsets. After receiving 120 submissions, the industrial solutions firm selected three to try as pilot project, Boris says – packing, assembly instructions and metrics, and field service applications for calling an expert on demand. The best efficiency gains that can be realized from the early days of AR headsets in the the enterprise are all about efficient communication.

To deliver those answers to its workers in the digital, visual way that’s useful in an AR headset, GE uses the Skylight software platform. Built by Upskill Inc., which is newly renamed from APX Labs as of Jan. 16, Skylight integrates with traditional enterprise software applications like an ERP or CRM and delivers it in a useful and relevant way to AR headsets worn by workers.

Upskill’s rebranding came just as its CEO Brian Ballard took part in the World Economic Forum (WEF) last week in Davos. Ballard was there to present to the world’s elite about the Fourth Industrial Revolution, a term that refers to the increasingly connected mix of technologies that are transforming industrial workspaces around the world – technologies like AR headsets. Last year, the WEF recognized Upskill as a ‘technology pioneer’.

“Upskill means elevating the impact of people in the modern workplace,” says Jeff Jenkins, co-founder and chief technology officer of Upskill. “When you look at automation, robotics, big data and IoT, these are all pieces to the larger puzzle, but we really feel they’re not the entire solution. The component you can’t overlook are the people.”

The workforce on manufacturing plant floors and in other industrial settings are facing a challenge today that is double-fold. They have increasingly complex machinery and processes to maintain and monitor, yet budgets are often tight and so is the personpower along with it.

As a global multi-national corporation, GE knows these challenges all too well, Jenkins says. That’s why it responded by piloting Upskill’s platform with wearables across several areas of its business.

According to Boris, even some of the groups that didn’t end up winning GE’s innovation challenge last year still went ahead with wearable pilots, organized without head office backing or extra funding. That’s just fine by Boris, as it fits with GE’s “FastWorks” philosophy that is based upon Eric Ries’ famous lean startup methodology.

“If you have something that’s dramatically valuable to the business and it’ll be ready in a year, can we figure out how to deliver that in 12 weeks, or even in 12 days?” he says. That’s why GE organized its innovation challenge – to see wearables implemented to its workforce as quickly as possible.

Now Boris is taking the same concept and helping apply it to the pilot projects in action. It’s a role that he’s used to – Boris joined GE five years ago as the CIO for advanced manufacturing strategy. He’s comfortable with the agile startup style of working because he was a CIO for a startup that specialized in mobile positioning credentialing on handheld personal organizing devices that preceded modern smartphones by a decade. At GE, he’s being tasked with taking success with internal operations and bringing that to customers.

So how does he approach wearables deployment? Boris sees it in three stages of maturity:

But “we don’t have to complicate it by giving everything in one shot,” Boris adds. “We’re starting at that lower maturity level, we don’t need to overcomplicate that use case to prove the value.”

For workers assembling gas and wind turbines, or wiring machine panels, or working on medical devices, they are using AR headsets simply to see the tasks they need to complete and access the information needed to complete the work. Also, the AR headsets provide a convenient way for supervisors to see a first-person view of what they’re doing, and provide assistance.

Upskill can integrate with an enterprise’s exisiting assets in place, Jenkins says. That includes the ERP, a warehouse management system, and a mobile device management system. Of course, an AR headset isn’t very much like a laptop and developers must think differently about how to display information, paring it down to only what’s critical to the task at hand.

“Usually it’s very easy to visualize and think about tasks and the way we do in the Skylight platform helps you keep focus in terms of what’s needed right at the point of work,” he says.

Developers use the Skylight platform’s Workstreams to organize the information. The work is presented in a branching timeline that shows the progression of tasks. As the worker moves through the steps of a task, the timeline progresses as well.

“You don’t have to adapt your workflow to Skylight, it adapts to the processes you have in place,” Jenkins says.

At GE, Boris finds that Upskill’s UI is good at masking the complexity involved in retrieving all the data from backend systems. It can bring up the right information at the right time, but that doesn’t mean that GE necessarily has all the information that would be useful in that context for its 120,000 employees that are hands-on with machines. What’s missing is the rich 3D model that’s on file for many machines – a tool that’s now being referred to as a “digital twin.”

“I think we’re a little way away from AR in manufacturing,” Boris says. “Someone has to determine if there’s really value in turning some of the drawings into 3D models.”

Everything manufactured more recently can be made with a digital twin without much added effort, he adds. But what about that locomotive engine that you only service every 10 years? As more machines are modelled for digital twins from inception, it will make more sense to have AR tools ready to service them.

In just three to five years, Boris says he can’t imagine a person on the plant floor that doesn’t have a wearable device to help them do the job. If you think that sounds unlikely, just consider how you’d react if you were told 10 years ago that everyone on the plant floor would be using an Apple-made tablet.

“Now everyone on the plant floor has an iPad in their hands,” Boris says.

If the ROI is as good as Jenkins says for Upskill’s Skylight system, CIOs will be racing to deploy the technology. Efficiency increases from 30 to 50 per cent the first time that a worker uses the technology – before they’re even accustomed to it, Jenkins says. Companies that adopt Skylight commonly see a 30 per cent increase in quality output and 20 per cent better resource utilization.

Those are numbers worthy of a pilot project, or four.