In a meeting with several Canadian jouralists, Microsoft Corp. held a hands-on demo for the HoloLens 2 mixed-reality headset first revealed at MWC 2019 in Barcelona.

Although it was initially marketed with consumer-oriented features, HoloLens 2 is still only available for enterprise. Because HoloLens isn’t marketed to consumers, not everyone may be familiar with its purpose. For those who aren’t in tune with HoloLens, it’s Microsoft’s augmented reality glasses designed for the enterprise. Microsoft’s vision for HoloLens is to provide robust instant wireless AR content to enable hands-free operation for professional work.

The new HoloLens brings several improvements over the original. A foremost focus for HoloLens 2 is comfort. When the user must wear it for hours on end, the headset shouldn’t cause any pain. In addition to using a new lightweight carbon fiber front enclosure, HoloLens 2 now more efficiently balances weight, reducing strain on the wearer’s neck. 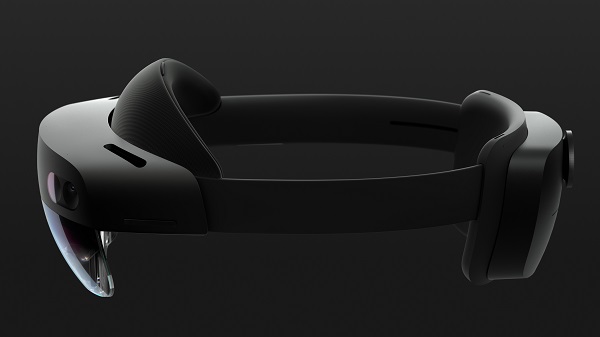 HoloLens 2 also doubles the field of view, which means more information at a glance and less head movement. Despite the enlarged viewport, Microsoft has maintained the 47 pixels-per-degree required to read 8pt font. The depth of field perception has also been reworked for a better depth of field.

In the near future, HoloLens 2 will be able to offload computing to Microsoft Azure GPU stack for even faster and more elaborate content. Using Azure will enable HoloLens to display dynamic holograms with a much higher polygon count.

A small but important feature is the ability to flip up the visor. This may sound like a no brainer, but being able to toggle between hologram and reality with minimal interruption to workflow is one of HoloLens’ key features.

Internally, HoloLens 2 is powered by a Qualcomm Snapdragon 850 SoC, but the real secret sauce is Microsoft’s 2nd generation custom holographic processing unit. The glasses render according to eyes’ positions, and support a 2k resolution, 3:2 aspect ratio display. The integrated camera captures 8MP still images and 1080p videos at 30fps. To accept voice commands, HoloLens 2 also has a 5-channel microphone array. Its battery lasts two to three hours of active use and supports Fast Charging over USB.

Currently, HoloLens is already being used in industries like game design, healthcare, manufacturing, immersive learning, and engineering. An engineer could overlay diagrams and labels over a machine, or a doctor could use it to guide him through complex surgeries. Craig Cincotta, Microsoft senior director for communications for business applications, noted a doctor in China who performed over 300 surgeries using the HoloLens, and that several major car manufacturers are using HoloLens in their design process. 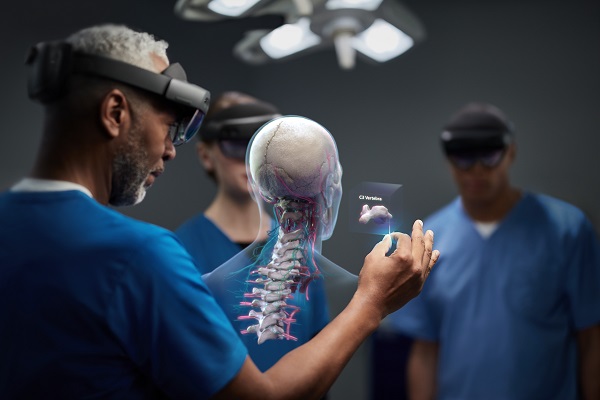 “Essentially, any time you need to have a large scale model of something, holographic display is a tremendous way for people to save time, energy, and money,” said Cincotta. He then described a scenario where HoloLens enables Japan Airline engineers to work in jet engines while it simulates what operation is like when the engine is turned on.

Microsoft took us through three demos, each showcasing how HoloLens can be used in a different industry.

If you’ve worn any virtual reality headset before, then putting on the HoloLens 2 should feel very natural. It was simply a matter of pressing the headpiece against my forehead and tightening the rachet at the back. The spacious area behind the visor easily accommodated for my glasses.

Following a short intro animation came eye-tracking calibration. The demo unit had me focus on a series of targets, but this tool will not be available for the final release.

The first demo showcased a wind-turbine placement planning scenario. A plot of land hovered in the air, with several spinning wind turbines installed.

It was at this stage that I began to be impressed by the HoloLens 2. The animation was fluid and the colors vibrant. The resolution and brightness were adequate enough to block out the background in a brightly lit room. Object’s size and perspective adapted flawlessly with changing distance and viewing angle thanks to spacial anchoring, a technique to fix a holographic image in place.

I was then asked to grab the hologram, undoubtedly to experience the improved articulate hand tracking. Reaching my hands forwards produced a frame around the model which can be selected by pinching my fingers. This allowed me to resize the model and move it around the room. Once placed, the object is anchored to the new location.

As impressive as it was, articulate hand tracking encompasses more than just simple hand gestures. The release version will allow its users to manipulate holographic buttons and objects just like in the real world.

The second station showcased how HoloLens is used in modeling and usefulness of the perspectives. It started with an isolated close-up model of the wind turbine from the previous demo, followed by a 3D render of its electric generator. The generator model could be rotated with two hands. When flipped to its backside, it revealed its interior structure.

The third station shows a potential application in the education space and eye-tracking. Interestingly, the demo initiated using a voice command. Looking at the appropriate section on the wall produced several colorful gems and a polygonal hummingbird. The hummingbird floated above my hand when I held out my palm, and flew away when I closed my hand. The gems in the background burst when I fixed my sight upon them. 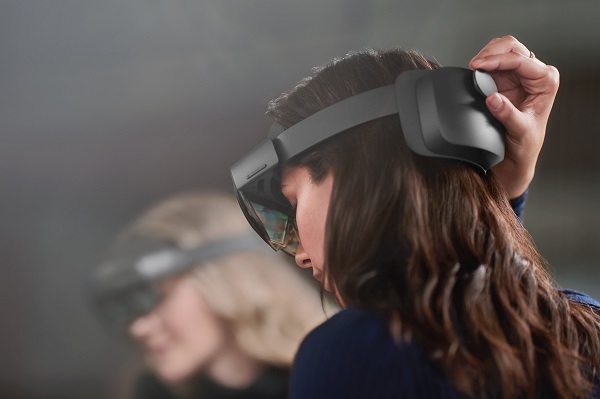 Activating all the gems led me to a panel of information on hummingbirds. The textbox tracked your sight position and automatically scrolled as I reached the end of the page. Scrolling back up followed the same concept; all that was needed was looking at the top of the page. The text was very clear and not at all straining to read.

When I attended the demo, there were only four units in the world. Cincotta said HoloLens 2’s official availability will be “some time this year” for around USD$3,500 per unit. Again, it’s important to note that this device is only for commercial channels, so don’t hold your breath if you want one to watch Netflix.

Tom Li
Telecommunication and consumer hardware are Tom's main beats at IT World Canada. He loves to talk about Canada's network infrastructure, semiconductor products, and of course, anything hot and new in the consumer technology space. You'll also occasionally see his name appended to articles on cloud, security, and SaaS-related news. If you're ever up for a lengthy discussion about the nuances of each of the above sectors or have an upcoming product that people will love, feel free to drop him a line at tli@itwc.ca.
Previous articleHP execs say don’t get into 3D printing unless you meet this one critieria
Next articleCyber Security Today – Phony flu email alert, more on business scams and GitHub warning