Disruption is a fact of life in these turbulent times, and often disruptions are in turn disrupted. For chief information officers (CIOs), it’s a challenge to separate what needs their attention from the fads.

At the annual Gartner IT Symposium/Xpo Americas, distinguished vice president and Gartner fellow Daryl Plummer highlighted seven disruptions that should be on a CIO’s strategic radar between now and 2026. Gartner places them along a five point disruption scale of Enhance, Extend, Transform, Reinvent, and Revolutionize. 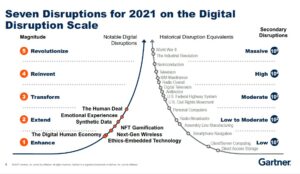 “I like to think of this presentation as an aperitif, sort of a palate cleanser, because it’s a different kind of presentation,” Plummer said. “We talk about out of the box ideas, unconventional thinking, and the disruptions that will emerge from them. And these disruptions are things that will shift you to a new way of working, a new reality as it were, and they won’t shift back until something else disrupts them.”

But, he added, there are secondary effects to disruptions, and they, too, are a big deal. They are the other changes precipitated by the disruption such as, for example, the possibility that self-driving cars will eliminate parking garages because the car would simply drop you off and head to its next pickup rather than parking.

“Understand what motivates them, what makes them happy, and what keeps them effective in their work,” he said. “When you do this, you’re able to make them a more valuable asset; the employee value proposition goes up. And that’s key to a company’s success, especially in a world where people have a choice about where they work, about moving on to other jobs.”

The CIO’s priorities here, he said, are to help human resources leaders make employees accountable, reduce the stigma of well-being offerings, and introduce manager coaching, with the goal of disrupting the work environment, the employee value proposition, and retention strategies.

“If you’re talking about humanity, you have to talk about ethics,” Plummer said. “The problem is, during the digital transformation that we’ve been going through, we’ve seen that systems technology, that AI, and that our ability to do things with technology has outpaced our ability to keep up with what the ethical ramifications are of that technology. Just because we can do it doesn’t mean we should do it.”

Not every technology has the same “moral footprint”, however. Some are relatively benign, while others offer the potential for issues, and things like artificial intelligence present a new social dynamic that requires new thinking. At the top (or bottom, depending on how you look at it) are developers or users who are making deliberate attempts to generate unethical results.

“This is relatively low on the scale in 2021, just enhancing markets. We’re thinking about ethics, but we’re not keeping up with all ethical aspects of the world that are moving beyond us. We have to think harder about how we do that,” he explained. “And by 2026, it could begin to transform markets, because ethics will be built into everything that we do. And this is the notion here, that ethics-embedded technology is necessary. We need to embed the ethics into the technology from the ground up, so we don’t have to trust in your moral stance.”

CIO priorities include taking on an oversight role for identifying and responding to ethical issues, and having a built-in response to built-in bias to deal with the disruptions of identification and response to systemic bias, and validation of an ethical stance.

Gartner predicts that by 2035, the digital human economy (DHE) will be a US$125 billion market, encompassing everything from chatbots and digital assistants to avatars, digital personal assistants, and beyond.

“Today, we’re enhancing our ability to do help desk support, but we’re not revolutionizing it just yet,” Plummer said. “That will require us to get to completely digital humans. And that’s possible – digital humans that we can’t tell are different from real humans, unless we try really hard. So what’s disruptive? Avatars are disruptive, idea mining, multi presence, companionship. And IP rights management: who owns the digital personas, who owns the characteristics? These are things we’ll have to figure out. The priorities? Digital twins today, digital humans tomorrow. You have to start embracing that digital twin technology to simulate things and people even as they are today.”

AI needs to be trained, and training data is usually taken from the real world, leading to all kinds of issues, from difficulty in obtaining sufficient data to cover all scenarios (for example, for self-driving cars) to privacy (need I say more than “facial recognition”?), and biased training sets.

Synthetic data, on the other hand, is generated by AI to encompass any situation we can imagine, using rules from statistical modeling or simulation or other techniques to create accurate datasets.

“The disruption on the scale in 2021, it’s already extending markets,” Plummer said. “We’re already seeing synthetic data show us gains in being able to find scenarios that we otherwise would not have seen. In 2026, we’ll be transforming markets, and realizing that we can simulate anything, a simulation of the entire planet is possible. And the scenarios of what happens with people across them during certain social movements will actually it will be predicted.”

“The response: supplement your 5G plans with LEO strategies,” he said. “Exploit an always available, low-cost communication network. That’s got to be in your plans; it’s going to get cheaper. So get ready to explore it more broadly and develop universal collaboration use cases here.”

Non-fungible tokens (NFTs), said Plummer, are unique representations of digital assets – say, a photo or a work of art, or a game character – that are being sold in what he calls the new Gold Rush. Tie them to gamification and that increases people’s engagement with them.

“And if you can do that with tokenized content, then you are able to actually keep people engaged with it, and the opportunity for making money out of it goes up,” he explained. “So in 2021, it’s extending markets. As I said, millions are being spent on these NFTs now. In games, you make a character that’s a very powerful one, you sell it to your friends online because they weren’t able to build as powerful a character. They will be transforming and beginning to reinvent markets in the future by 2026, because they will allow us to create a whole new economic scale, an economic scale that creates a Silicon Valley of the virtual world. It’s going to help corporate operations and countries alike.”

Advertisers and marketers are already using emotional detection software, Plummer said. They mine your mood, looking at facial expressions, body temperature, the sound of your voice, and your movement, and from all that determine what appears to be your emotional state. Inexpensive sensors can track your biometrics for less than $1 each.

From that, he said, “we can create hyper-personalized digital experiences for everyone. You’re in a crowd watching an advertisement, and it can be tailored to affect you personally, and all the people around you personally but independent of one another. Complex advertising scenarios will emerge. Emotional intelligence is important. And by 2024, identification of emotions will influence more than half of the online ads that you actually see. So you have to look at this as something that’s disruptive to the way that you exist in the world. In 2021, it’s extending markets. By 2026, it will transform them, helping companies figure out how to engage with customers, and have customers engage with products on an emotional and behavioral scale, not just a desire or an action scale.”

Getting ready for these seven disruptions is half the battle, he said, and they show that it’s time to deal with humanity, and to do so on a scale that will change everything that we do.

Lynn Greiner
Lynn Greiner has been interpreting tech for businesses for over 20 years and has worked in the industry as well as writing about it, giving her a unique perspective into the issues companies face. She has both IT credentials and a business degree.
Previous article
Gartner’s top predictions for IT organizations and users in coming years
Next article
Hashtag Trending Oct. 26- Australia’s privacy bill; Tesla software flaws; Robot detained in Egypt