Furniture Bank executive director Dan Kershaw says he didn’t expect to win a 2016 Ingenious Award from the Information Technology Association of Canada (ITAC), it’s easy to believe him – after all, his organization didn’t apply for the award in the first place.

“Generally as a charity, you kind of keep your head down and focused on your mission,” he says. “Within Furniture Bank we’re very proud of being innovative and pushing boundaries, but it’s not something we push to be recognized for.”

Instead, it was one of Furniture Bank’s many volunteers from Salesforce.com’s Toronto office that submitted the charity, which distributes donated furniture to families and individuals in need across the Greater Toronto Area, for consideration, resulting in today’s win.

“It’s really quite an honour to be recognized by our peers,” Kershaw admitted. “A lot of people, especially in the not-for-profit space, generally run from technology because they don’t understand it, and to be recognized for what we’ve done is very much appreciated.”

Supporting a growing number of clients

Furniture Bank received this year’s ITAC Ingenious award in the “Not-for-Profit Sector” category for its custom application of the Salesforce1 mobile platform, which has enabled its 48-person staff and 11-truck fleet to go from supporting roughly 5,600 clients in 2014 to an expected 10,000 or more by the end of 2016 – a remarkable enough gain that Salesforce recently invited Kershaw to present during its Dreamforce conference in San Francisco.

“Even when charities make the leap to Salesforce they can be nervous about customizing,” he says. “In our case, we had to customize to make the Salesforce platform function like a furniture bank.”

Founded in 1998, Furniture Bank originally relied on a mix of Microsoft Excel, paper, and a love of clipboards to manage its financial records and keep track of its stock, Kershaw told ITBusiness.ca in an earlier interview.

Change started in 2007, when former executive director John Cummings, a veteran executive aware both of the Salesforce platform and its non-profit arm Salesforce.org’s commitment to donating that platform to charities, non-profit organizations, and educational institutions, began programming a customized platform for Furniture Bank, though it would not be implemented for another two years.

Since 2009, Furniture Bank has been receiving Salesforce technology under Salesforce.org’s “Power of 10” program at a reduced rate, with both the core platform and a newly implemented iPad app playing a key role in the charity’s recent growth.

Its daily goal is to now reach 25 families in need of a true home every day – a drop in the bucket considering waiting lists representing more than 25,000 families a year in the Greater Toronto Area alone.

“The act of going to 50 homes every day and collecting the right furniture, getting it processed, and allowing 25 families to come in and select their furniture before delivering it just couldn’t occur without the interconnectedness that comes from Salesforce,” Kershaw said in his previous interview with ITBusiness.ca.

Women and children fleeing from abuse represent one-third of Furniture Bank’s clients, while refugees represent another third. The remainder is made up of what Kershaw calls the “recently housed” – runaway teenagers, former homeless, war veterans, evicted elderly, the mentally ill. 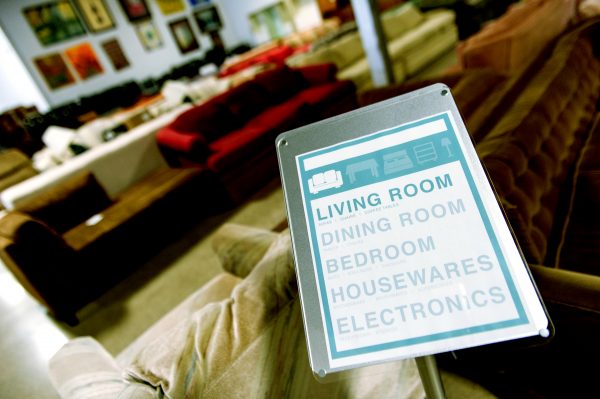 The road to ingenuity

As for Furniture Bank’s nomination, Kershaw says that two groups of between eight and 10 employees from Salesforce’s Toronto office visit every month to witness their company’s charitable efforts in action, and it was one of them who submitted the organization for consideration.

“A couple of them said, ‘When you sell software, it’s very hard to visually see the impact it has on society,'” Kershaw says. “When they’re holding their mobile one app in their hands and see its customized functions and the lives we’re able to change because of that, it has an impact.”

Asked what’s next for Furniture Bank, Kershaw says the win has given the charity enough confidence to attempt expanding its customized platform nationally so that it can function wherever communities need it.

“Other communities and furniture banks regularly they call us and say – I’m paraphrasing – ‘could you bring that approach you do in Toronto to our community?'” he says. “Unfortunate, it isn’t as easy as opening an account with your iPad and logging in.”

“We don’t know how we will go national and support communities across the country,” he admits. “But the Salesforce app will be the foundation of how we do that.”

ITWC is a media partner with ITAC for the Ingenious Awards.

Eric Emin Wood
Former IT World Canada associate editor turned consultant with public relations firm Porter Novelli. When not writing for the tech industry enjoys photography, movies, travelling, the Oxford comma, and will talk your ear off about animation if you give him an opening.
Previous articleInfosec pros worry about cyber security funding for smart cities
Next articlevRealize cloud management suite adds support for Azure, containers