Ford partners with Lyft on self-driving cars for all 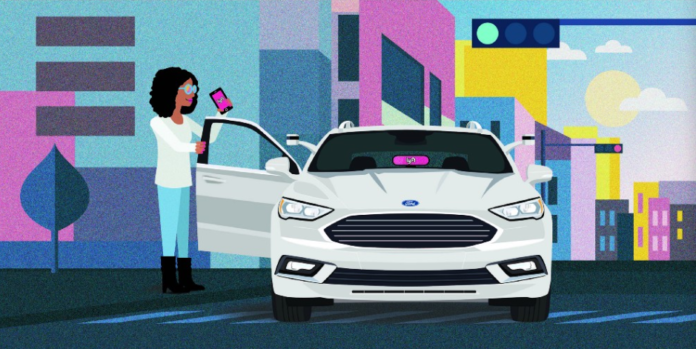 In a Medium post on Wednesday, Ford Vice-President of Autonomous Vehicles and Electrification Sherif Marakby announced the plans. Ford has previously said it wanted to deliver self-driving cars in on-demand service model by 2021, but this is the first time it’s named a partner in that space. There’s no clear timeline on when Lyft will go to market with the self-driving cars yet.

“Someday, when you open the Lyft app during a period of high demand, Ford and Lyft software will need to be capable of quickly dispatching a self-driving vehicle so that you can get to your destination as quickly and as safely as possible,” Marakby writes. “Some view the opportunity with self-driving vehicles as a race to be first. But we are focusing our efforts on building a service based around actual people’s needs and wants.”

Ford says that the goal is to deliver self-driving cars alongside Lyft’s human drivers.

Safety comes first with this project, he makes clear. But the goal is to learn how Ford can best connect with a partner’s platform in order to dispatch a self-driving car on demand. It will also identify cities that are good candidates for access to self-driving cars based on data.

Ford has been contemplating how self-driving cars might disrupt its business. Last March, Ford spun off a wholly-owned subsidiary called Ford Smart Mobility LLC so that it could compete like a startup. The company is exploring transportation options beyond car ownership and has participated in a series of experiments in London that direct drivers where they might be able to find parking, as well as a shuttle program in Dearborn, Mich. that allows on-demand ride requests.

Ford’s acquisition of Pittsburgh-based startup Argo AI will play a role in this new partnership with Lyft, Marakby says. Its virtual driver system is the basis of Ford’s self-driving technology.

It’s possible that Waterloo, Ont.-based BlackBerry will play a role in Ford’s path to a commercially viable fleet of self-driving cars. Last October, the companies announced a deal that would see BlackBerry’s QNX software embedded in future Ford vehicles. The deal was original because software like QNX would normally be embedded in a Tier 1 partner to automotive manufacturers, which design infotainment systems to be integrated into the cars. While Ford hasn’t commented much on the partnership with BlackBerry, working with them directly on how QNX is developed may signal it is interested in exploring other ways the software could be integrated into its cars. Further, QNX Neutrino is an OS that’s certified for self-driving systems to be built upon.

We spoke to Ford about its self-driving plans at the Canadian International Auto Show in February. Watch that video here: