Ask any security expert and they will quickly point out that end-point threat protection isn’t a product. It’s an ecosystem made up of a number of products and, just as importantly, policies and user behaviours.

In the latest issue of CanadianCIO, we recently spoke with three users of products to protect their end-points, each of different scope, industry and perspectives to get their take on the security products they have in place and how they’re keeping their organizations safe.

*Reviews are out of three stars. Click to enlarge image: 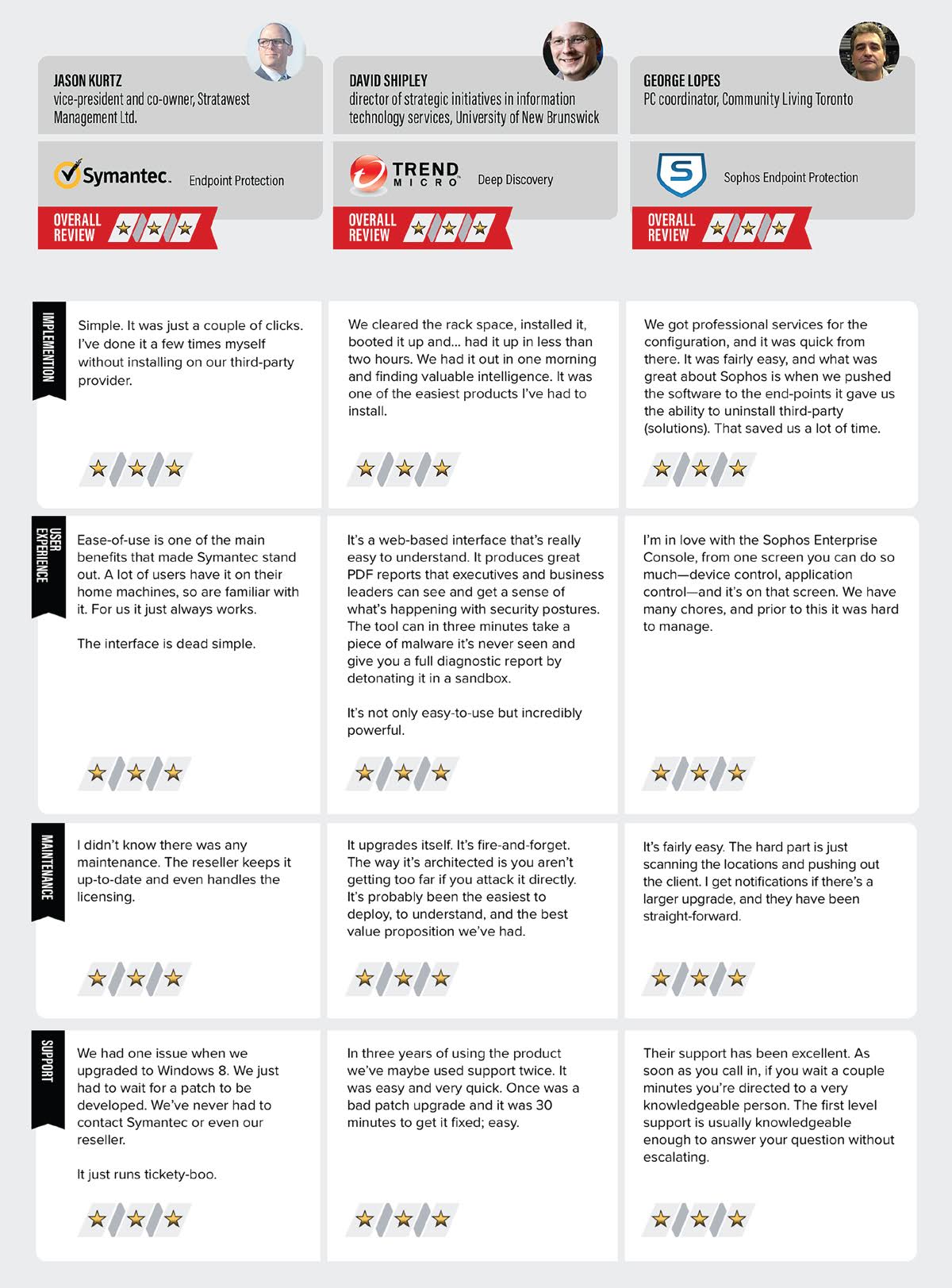 “We’ve been using Symantec for as long as there’ve been computers,” says Jason Kurtz, the firm’s vice-president and co-owner. “For companies of our size, we’ve got a lot of novice users and end-point security is our second line of defense; the first line being people’s common sense.”

He notes that phishing techniques have become so convincing it becomes harder for employees to distinguish threats from legitimate documents. “We get things that look like they’re from our bank, but they need to be scanned.”

Like many small and mid-sized businesses, Stratawest uses a service provider to manage its security software on the backend.

Universities face a paradox around security: on one hand they care very much of the privacy and security of the information in their custody, while on the other they are institutions of learning and openness with a technology legacy spanning farther back than most enterprises.

“You only have to look at what’s happening at the University of Calgary to see the problem universities face,” says David Shipley, the University of New Brunswick’s director of strategic initiatives in information technology services, referring to the ransomware attack that ultimately saw the western university pay $200,000 to cyber-criminals.

Shipley says cyber-security needs to look beyond the “silicon bias” many experts have, but must also, appropriately, include user education and issues of culture. “I have to fundamentally believe in the power of education and behaviour change.”

To that end, his team uses not only end-point AV software, but Trend Micro Deep Discovery to detect, analyze and respond to today’s class of attacks. He combines this with IBM’s QRadar Security Intelligence Platform, which was developed out of UNB.

“It’s like a breathalyzer for your end-point,” he says of Deep Discovery.

Community Living Toronto supports thousands of individuals with intellectual disabilities that seek accessible and meaningful ways to live in Toronto communities. With 80 offices across the city and a staff of 1500 full-time and part-time employees the localized non-profit operates very much like large company due to the number of endpoints that must be managed, according to David Renfrew, its manager of projects and infrastructure.

When its previous security vendor left it “high and dry” during a crisis, the team at Community Living Toronto knew they needed to make a switch. Working with the Herjavec Group, they were introduced to Sophos. “After being frustrated with (the previous vendor), we needed to see better support,” notes George Lopes, PC coordinator at Community Living Toronto. “It was night and day.”

Lopes that says he appreciates that Sophos pushes software updates continually through the day, creating a lighter bandwidth load than larger patches.