Cisco Canada’s new president, Shannon Leininger, took advantage of her first media and analyst roundtable to run through Cisco’s overall strategy and to introduce the new Office of the CTO.

One thing was clear: She’s bullish on Canada. “So many of the organizations that I’ve been part of, as I’ve moved into those new organizations, they’ve been described as fixer-uppers,” she said. “That is not the case for Canada. For Canada, there’s a great foundation that’s been in place and great talent that exists within the organization.”

She enumerated some of Cisco’s accomplishments in this country, including the Connected North initiative that has helped 20,000 students with remote learning and access to mental health resources and the Digital Canopy project in Toronto to provide connectivity to underserved communities.

Cisco has three strategic themes that Leininger focused on when she first took on the job seven months ago. The first was to build the team. “We have a great organization. We’ve got great talent within Canada,” she noted. “I wanted to continue to build upon the talent that exists within the organization and make investments to continue to help our team get to the next level.”

The second was to focus on growth. “We’re in the growth business,” she said. “That’s our responsibility: To focus on the key verticals where we believe we can go in and make an impact and continue to grow in Canada.”

The third theme was to reimagine the new normal. “We know business models are changing,” she said. “We know that digital acceleration is happening at an unprecedented pace, and how are we continuing to work with our customers to help them evolve to be future-ready?”

With those themes in mind, Leininger introduced the business model and strategy she’s implementing in Canada, which Cisco calls the Success Equation. It has four tenets: customer success, commitment to metrics, passionate people, and a clear, compelling vision. 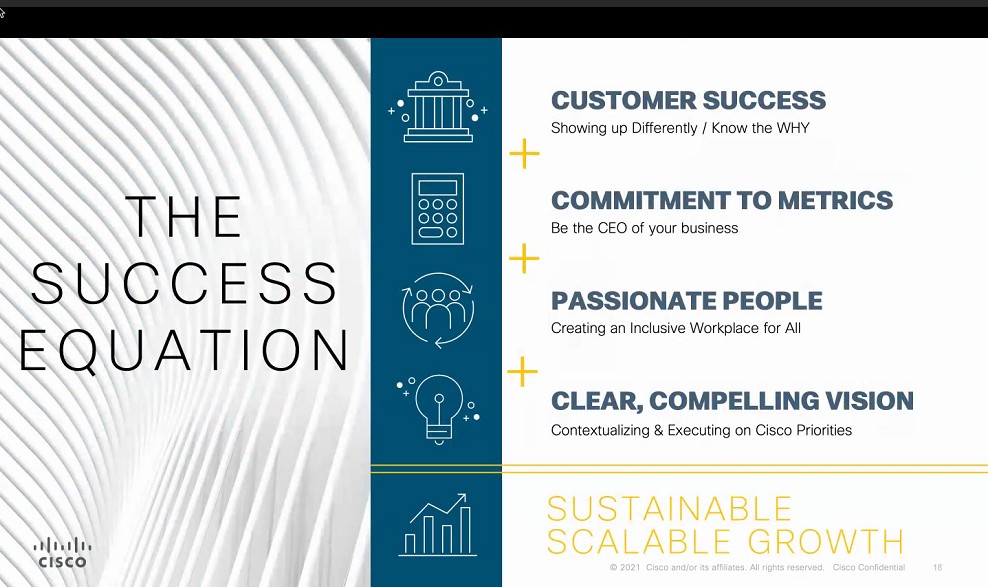 “If we do those four things, if we focus our time in those areas, that gives us what the company expects from us, which is sustainable and scalable growth,” Leininger said. “If I specifically look at what I’m asking the teams to do, again, I’m asking the teams to move outside of just technology conversations and have new conversations with different lines of business about the impact that we can make in the country.”

“Partners are hugely important to our success within Cisco, and certainly within Canada,” she added. “We’re going to continue to work with our partners to help them be successful in the solutions that they’re delivering with Cisco inside, to make sure that we’re supporting them with their as-a-service offering and managed service offerings. As we continue to evolve and have new conversations with our customers, it’s going to open up the opportunity to have a new ecosystem of partners that we work with and will continue to evolve because that’s critical to our success. And we believe that partners are an extension of our sales organization, and certainly a force multiplier for us in the business.”

The Office of the CTO

Leininger then introduced the new Office of the CTO. “When I came into Canada, I had the opportunity to go around and meet and to be introduced to a lot of different people,” she explained. “And there were a handful of individuals where I just thought, wow, these guys are doing some amazing things and having some really transformational conversations with our customers. How do I elevate them within the organization and out into the market to start telling more of these stories and working with our customers a little bit differently to reimagine the future and to drive that reimagination? And so we created this office of CTO.”

The trio that she described as the Office of the CTO “brain trust” then took the virtual floor.

“I’ve had the opportunity to have conversations and work with CIOs and CTOs across the country, from the big banks to the oil and gas sector, to public sector and government,” Barton said. “And when you talk to these executives, you hear the same messages starting to come back over and over again, and they really focus on three core business problems that they’re trying to solve. The first one is that CIOs are trying to drive cost out of their business, they’re trying to make it more efficient, and streamline their operations. The second thing is they’re trying to make themselves more adaptable and more agile. And the third business problem is they just need to be more secure.”

He thinks those challenges will create a paradigm shift in network architecture centred on full-stack observability, using analytics to look at data and telemetry coming from the network.

Tolchinsky said that in his role he’s hearing that the future of work will be hybrid; Cisco’s studies indicate that 58 per cent of respondents will continue to work from home at least eight days per month.

As a result, he said, “Over the coming months, I will be working with our customers to answer some of these big questions that we’re hearing from our customers, constituents, executives, like how do I secure my remote workforce?”

In his industry solutions role, Thibault said that his team works with partners, integrators, engineering firms and OEMs to deliver complete solutions in areas such as energy-efficient buildings, virtual healthcare solutions, and asset tracking in mining operations.

As CDA lead, his focus has been on projects such as the Toronto digital canopy. Although most are not yet public, he has 27 approved projects today in six verticals, with more in development.

“One of my key priorities over the next year or so is to really broaden those investments and broaden the impact of the program across both private and public sectors,” he said. “And quite frankly, from the list of projects that we have in development, the potential definitely does exist.”

Lynn Greiner
Lynn Greiner has been interpreting tech for businesses for over 20 years and has worked in the industry as well as writing about it, giving her a unique perspective into the issues companies face. She has both IT credentials and a business degree.
Previous articleHashtag Trending, March 30, 2021 – Bezos strikes back; Rise of silicon successors; BMW charges for software update
Next articleCanadian spammer receives $75,000 fine

What tech skills will be most in demand in a post-pandemic world?

Raise your IT staff’s business smarts