Most Canadians believe the country’s telecommunication (telecom) industry is uncompetitively expensive and compares poorly to those in other regions, but that’s not entirely accurate, according to a new report by the Montreal Economic Institute (MEI).

The publication, titled “The State of Competition in Canada’s Telecommunications Industry 2017,” aims to dispel the notion that Canada’s telecom industry is uncompetitive, while also pointing out that it is set to be majorly disrupted – and improved – by the exponential rise of the Internet of Things (IoT).

Canadians are among the biggest consumers of telecommunications services in the world, MEI says, with penetration and usage rates for tablets, smartphones, and LTE connections among the highest for industrialized countries. Of those that own mobile phones, 83 per cent of Canadians own and use smartphones. Additionally, Canadians, on average, use 2,267 megabytes of data per month.

Related Stories
Canadians give their wireless carriers a B grade: J.D. Power 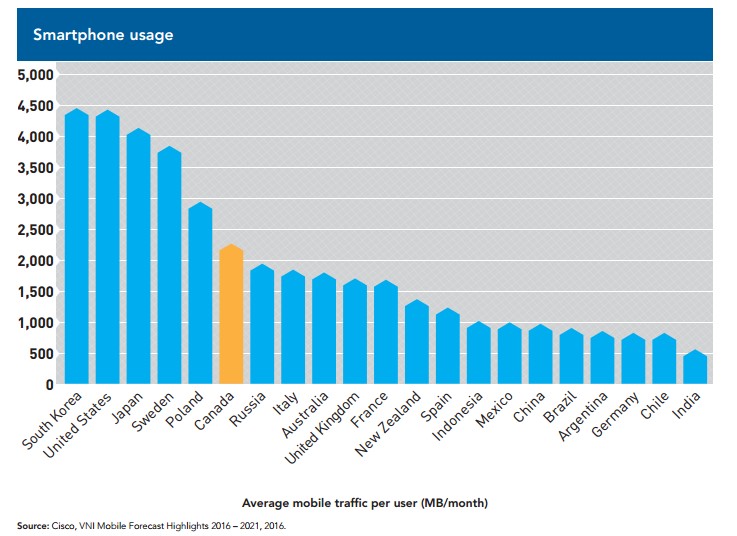 When it comes to prices, MEI found that while Canadians pay generally higher for wireless services than places like Europe and Australia, they are much more comparable to the average prices in the US and Japan. Canada has the highest prices out of the countries surveyed for very low usage plans (that come with the bare minimum services and features like texting, minutes, etc.), and second highest prices for very high usage plans (that come with additional services such as call display, voice mail, etc.), but fall in line with other countries’ pricing levels when it comes to plans in between the two. 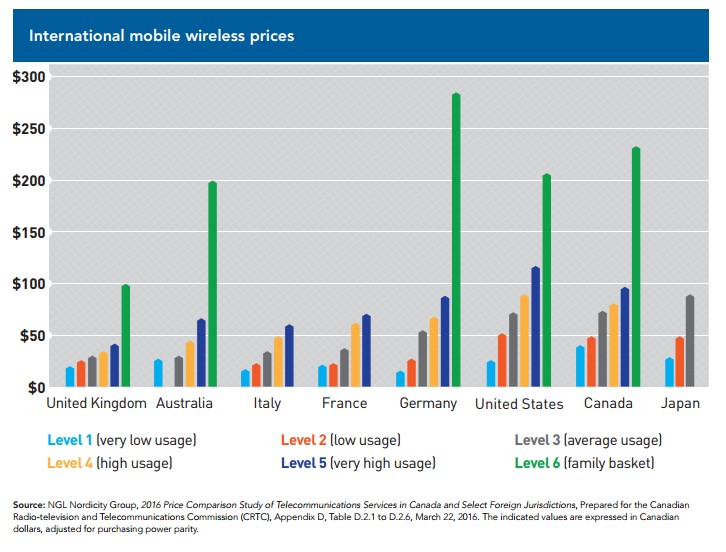 And when it comes to the internet, the report highlights, Canada actually ranks first in terms of wireless services affordability when taking into account income per capita and the state of competition in the market. 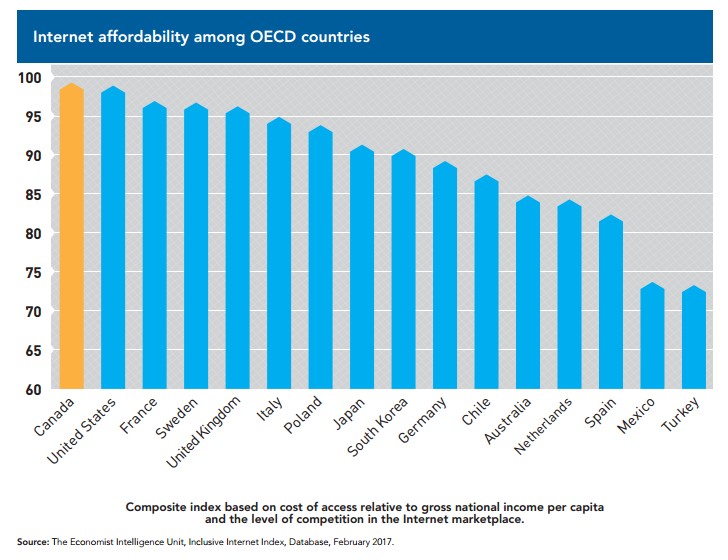 It also adds that with the additional costs associated with Canada’s low density of users per square kilometer, Canadian prices and quality of services are relatively fair. Compared to countries like Japan and the Netherlands, which has a density of over 400 wireless connections per square kilometer, “it is much more expensive to develop and maintain a wireless network in Canada,” MEI finds. 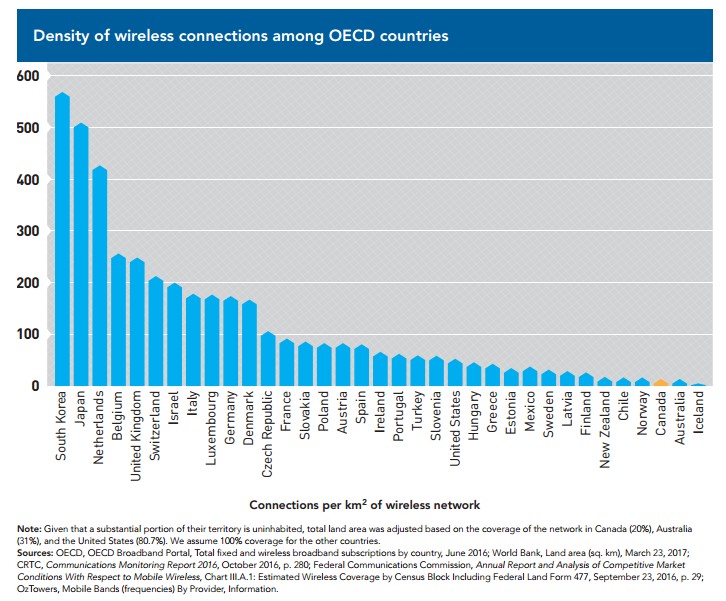 The MEI report includes an entire chapter looking at the exponential rise of IoT technologies and their impact on Canada’s telecom environment. The Internet of Things is at a stage of development similar to that of the Internet itself in the early 1990’, it explains, calling it the “fourth industrial revolution.” 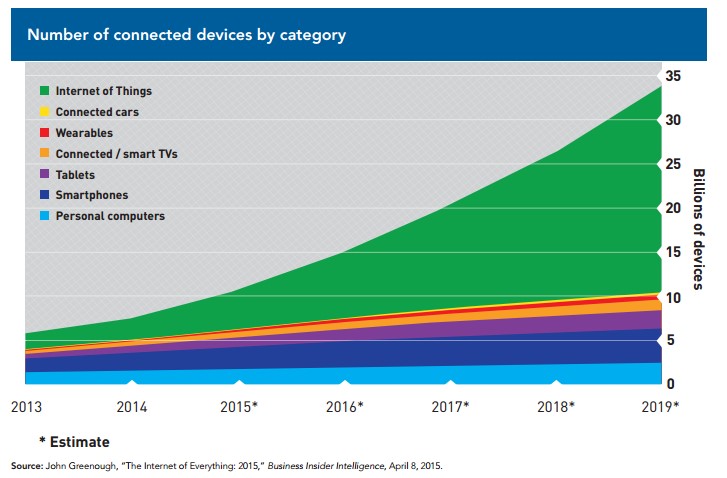 With the number of objects connected to the Internet in the world already overtaking the number of electronic devices used by human customers, “the debates of the past decade over telecommunications services, prices, and levels of competition are likely to become gradually less relevant as this new technological paradigm comes to dominate the sector,” the report adds.

It continues to say that as IoT becomes more important in gathering and analyzing the vast amounts of data being created by mobile devices, the country’s entire economy “will depend on telecommunications networks that support the Internet of Things.”

There will be an increased focus on providing IoT platforms and integrated solutions to compliment phone and internet services, with the IoT market expected to be worth approximately $21 billion in Canada by 2018. However, it notes that only the large national (Bell, Telus, Rogers) and regional service providers (Videotron, Shaw, Eastlink, SaskTel) will be able to afford investing in the wireless infrastructure needed to support and keep up with developments in IoT, such as 5G networks.

“Only the carriers that own the infrastructure will be able to manage their networks so as to meet these complex needs. Resellers will have no role to play in this evolving market,” it predicts.

It concludes that while IoT will help the Canadian telecom market and economy become more efficient and competitive, federal policies need to evolve so that the government is not “fighting yesterday’s regulatory battles,” and instead, support the new IoT reality.

WannaCry just a taste of NSA-charged cyber attacks to come

Bell Canada says it's been hacked, apologizes to customers
About Mandy Kovacs

Mandy is a lineup editor at CTV News. A former staffer at IT World Canada, she's now contributing as a part-time podcast host on Hashtag Trending. She is a Carleton University journalism graduate with extensive experience in the B2B market. When not writing about tech, you can find her active on Twitter following political news and sports, and preparing for her future as a cat lady.

A one-on-one with Sarah Cooper, GM of IoT analytics and applications, AWS

How to eliminate data silos to fuel agility and productivity