IT services company Dimension Data released its 2015 Global Contact Centre Benchmarking Report, which found that 93 per cent of Canadian contact centres predicted an increase in non-voice traffic. This compared to 87 per cent of contact centres globally. 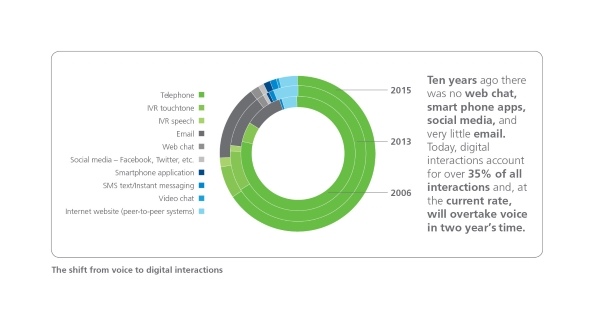 Canadians may want to communicate with companies via email, Twitter and SMS, but companies aren’t prepared to deal with the data that these communications will generate.

This could lead to problems for CIOs as they try to support businesses in customer acquisition and retention. Generation Y customers tend to use social media as a first contact, then web chat, then email, and finally the telephone, said Andrew McNair, head of global benchmarking for contact centre solutions at Dimension Data.

If their interactions are mostly via these digital channels, perhaps never even reaching the phone stage, then it will be important for CIOs to help capture data about how customers progress through the system, and how they prefer to communicate, he suggested.

“They need to do is create some journey mapping,” said McNair. A bank that wants to convert credit card applications must take the individual consumer’s preference about communications channel into account, along with data about the cost of interacting via a channel.

“Let’s say it’s 20 per cent cheaper to route a loan application to online than it is to do it over the telephone, but the completion rate online may be 40 per cent less,” McNair said. “Then it makes sense to have those inquiry types routed to an agent.”

Part of the problem is that Canadian IT is siloed, McNair warned. Systems simply aren’t joining the dots, and this extends across the whole organization, not just within the contact centre.

Contact centres face other challenges as their customers move to alternative communication channels. In particular, omni-channel capabilities will be lacking.

Customers will want to hop between digital communication channels, and they will expect companies to follow them. If their IT systems are already siloed, then contact centres will have a hard time doing that.

It is perhaps no wonder, then, that 84 per cent of Canadian contact centres don’t believe that their ICT meets their current needs.

“Organizations are now understanding that there is a new hybrid architecture model available where you continue using the legacy architectures that are there, but then add to them and complement those with integrated cloud and hosted solutions. That’s gaining real traction,” he said.

Globally, the report found a 23 per cent decrease in direct ownership models among contact centres over the last 12 months. A third of organizations were now planning cloud integration globally.

Danny Bradburyhttp://www.wordherder.net
Danny Bradbury is a technology journalist with over 20 years' experience writing about security, software development, and networking.
Previous article5 must read cloud stories for Feb. 27
Next articleBlackBerry offers up cloud EMM for enterprise and SMBs