Microsoft’s hardware event on Sept. 22 saw the refresh of nearly the entire Surface lineup, along with a new addition to the family and a few new accessories.

Starting with the big-ticket item, the Surface Laptop Studio is Microsoft’s reimagined convertible laptop, a vision that started with the first Surface Book in 2015. 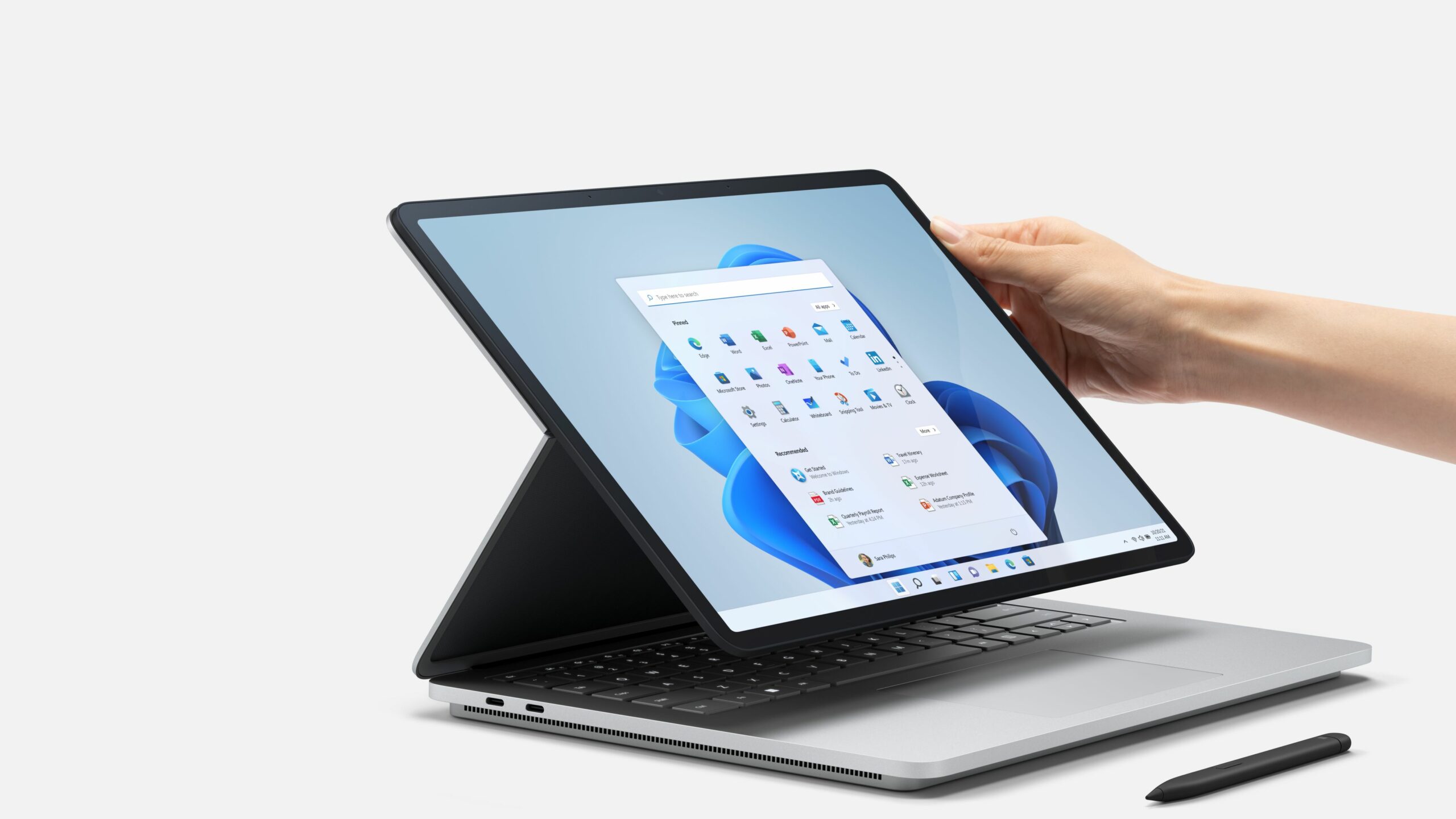 Unlike the Surface Book, which features a detachable display that functions as a standalone tablet, the Surface Laptop Studio collapses its screen on top of the keyboard using a hinge mechanism reminiscent of the Surface Studio desktop.

The benefit of this new approach is of course speedier transitions between laptop mode and drawing pad mode, but being fixed to the keyboard base also renders the Surface Laptop Studio unwieldy as a tablet.

The Surface Pen, sold separately, attaches magnetically to the underside of the keyboard and charges wirelessly.

Hardware-wise, the Surface Laptop Studio has the best in the series. The highest-end configuration carries an Intel 11th Gen Core H35 i7-11370H processor, 32 GB of memory, 1TB storage, and either the Nvidia GeForce RTX 3050 Ti graphics or the Nvidia RTX A2000 workstation graphics.

Cooling these powerful components in a 14.4-inch chassis is no easy feat, which is why Microsoft compromised on the device’s thickness. The base has an extra “layer” at the bottom to house its cooling system and increase ventilation.

It’s also highly likely that the extended base accommodates a larger battery. Microsoft quotes the Surface Laptop Studio’s battery life as 18 hours for the Intel Core i7 model and 19 hours for Intel Core i5 model. Note that the optional dedicated graphics is only available for the Core i7 model.

Another big feature is the 120Hz high refresh rate display. It goes without saying that a high refresh rate display offers smoother animations and gaming, but it may also improve the drawing experience as well. Although Microsoft did not list the display’s colour gamut on the spec sheet, it does promise an impressive 1,500:1 contrast ratio (any number above 1,000:1 is considered “good”) and Dolby Vision support.

The Surface Laptop Studio is also the first to feature USB 4.0 ports and a haptic touchpad. Moreover, Microsoft says the device’s storage is removable, as it was on the Surface Laptop.

The Surface Laptop Studio is available for pre-order now starting at CA$2,050. Ships on Oct. 5.

Whereas the Surface Duo 1 arrived with dated hardware, the Surface Duo 2 has anything but. Inside its two folding leaves is Qualcomm’s flagship Snapdragon 888 system-on-chip (SoC), 8GB of LPDDR5 memory, and up to 512GB of storage. Using Qualcomm’s latest chip also enables mmWave 5G connectivity. In the U.S., it supports mmWave frequencies; in Canada, sub-6GHz.

More importantly, Microsoft has bolted a rear camera array to the Surface Duo 2 to improve the subpar camera performance of its predecessor. The triple camera array comprises a 12MP main camera, a 12MP telephoto camera, and a 16 MP ultra-wide camera. Even the front camera now sports a new 12MP sensor.

The folding AMOLED display got better, too. Each half is now 5.8-inches, 0.2-inches larger compared to the previous generation. When opened, the two halves combine into an 8.3-inch display. They’re protected by Corning’s Gorilla Glass Victus, the same durable material used for the Samsung Galaxy S21 series. Another surprising upgrade is the 90 Hz refresh rate. The Surface Duo 1’s display was locked at 60Hz.

Also new is the Glance Bar. It’s not a separate display, rather, it uses the edge of the main display to show notification counts so the user doesn’t have to open the device.

Increasing the display size didn’t seem to increase the device’s footprint. Unfolded, the Surface Duo 2 is just 1.1mm wider and 0.7mm thicker than the original. Retaining the sizes while increasing display size could only mean one thing: thinner bezels, woo! With that said, the new version is 34g heavier than its predecessor.

When the first Surface Duo debuted, its 3,577mAh battery was worryingly small to power an 8.1-inch display. Microsoft has now addressed this with the second-gen by including a 4,449mAh unit. But despite the upgrade, Microsoft still quotes a 15.5-hour local video playback time, the same as last gen, although the call time has extended by one hour to 28 hours.

While the device supports Fast Charging at 23W, Microsoft will not be including a fast charger in the box. And like the last generation, there still isn’t any word on water or dust resistance.

The Microsoft Surface Duo 2 is available for pre-order today starting at CA$1,900. Ships on Oct. 5.

The classic Surface Pro returns for the eighth time, making it the longest-running model in the Surface family.

The Surface Pro 8 brings the biggest jump in display size –from 12.3-inches to 13-inches–since the release of the Surface Pro 3 in 2016. The display didn’t just get bigger, it’s also been upgraded to the 120Hz PixelSense Flow panel. Moreover, the display now features 10.8 per cent higher resolution and is 12.5 per cent brighter.

The bigger display also means a bigger Surface Type Cover keyboard. Microsoft used the extra room to carve out a channel to hold and charge the Surface Slim Pen 2, but only on the more expensive Signature keyboards. A natural consequence of a bigger device is more weight; the Surface 8 is now around 100g heavier than its predecessor.

The devices include up to 32 GB of memory and up to 1TB of storage.

After eight years, the Surface Pro series finally gets Thunderbolt for the first time. Not only does the Surface Pro 8 come with two USB-C 4.0 ports, but they also support Thunderbolt 4. Unfortunately, the two USB-C ports left no room for a USB-A port; its absence from this generation likely means the end of USB-A on Surface Pro devices.

The Surface Pro X received the least love. In fact, its biggest change is actually a feature reduction. It now comes in a Wi-Fi only model that starts at a lower US$889  (CA$1,150) price point. The silver lining is that it now runs Windows 11 on ARM.

The future for an ARM-powered Windows device is a nebulous one. The Surface Pro runs well enough to be sold, but it’s clear that Windows on ARM just can’t hold a candle to Apple’s M1 MacBooks both in performance and ecosystem. Microsoft had its chance before Apple released its own chips, but it now must fight an uphill battle.

The Surface Slim Pen 2, Microsoft’s active stylus for Surface devices, now carries a haptic motor for Tactile Signals when used with a compatible application. The tactile feedback provides “the same feeling you get with pen on paper” and confirmation when a natural gesture is activated successfully. Compatible apps include Microsoft Word, Adobe Fresco, and Shapr3D. Note that Tactile Signal only works with Surface Pro 8 and Surface Laptop Studio with Windows 11.

Its features include 4,096 pressure sensitivity points and near-instantaneous latency. The pen comes with a USB-C charging base in the box, but can also be charged wirelessly in the Surface Pro Signature Keyboard, Surface Duo 2 Pen Cover, or when it attaches magnetically to the Surface Laptop Studio. Each full charge can last 15 hours of use.

Update: The Surface Pro 8 will ship on Oct. 21, not Oct. 5. The original article has been amended to reflect this change.

Tom Li
Telecommunication and consumer hardware are Tom's main beats at IT World Canada. He loves to talk about Canada's network infrastructure, semiconductor products, and of course, anything hot and new in the consumer technology space. You'll also occasionally see his name appended to articles on cloud, security, and SaaS-related news. If you're ever up for a lengthy discussion about the nuances of each of the above sectors or have an upcoming product that people will love, feel free to drop him a line at tli@itwc.ca.
Previous articleCyber Security Today, Sept. 22, 2021 – Epik breach has epic ramifications, misconfigurations by EventBuilder users and phishing attacks on the aviation sector
Next articleHow a phishing-as-a-service operation works