Surface Go 2 review: versatile and powerful, but only if you pay more 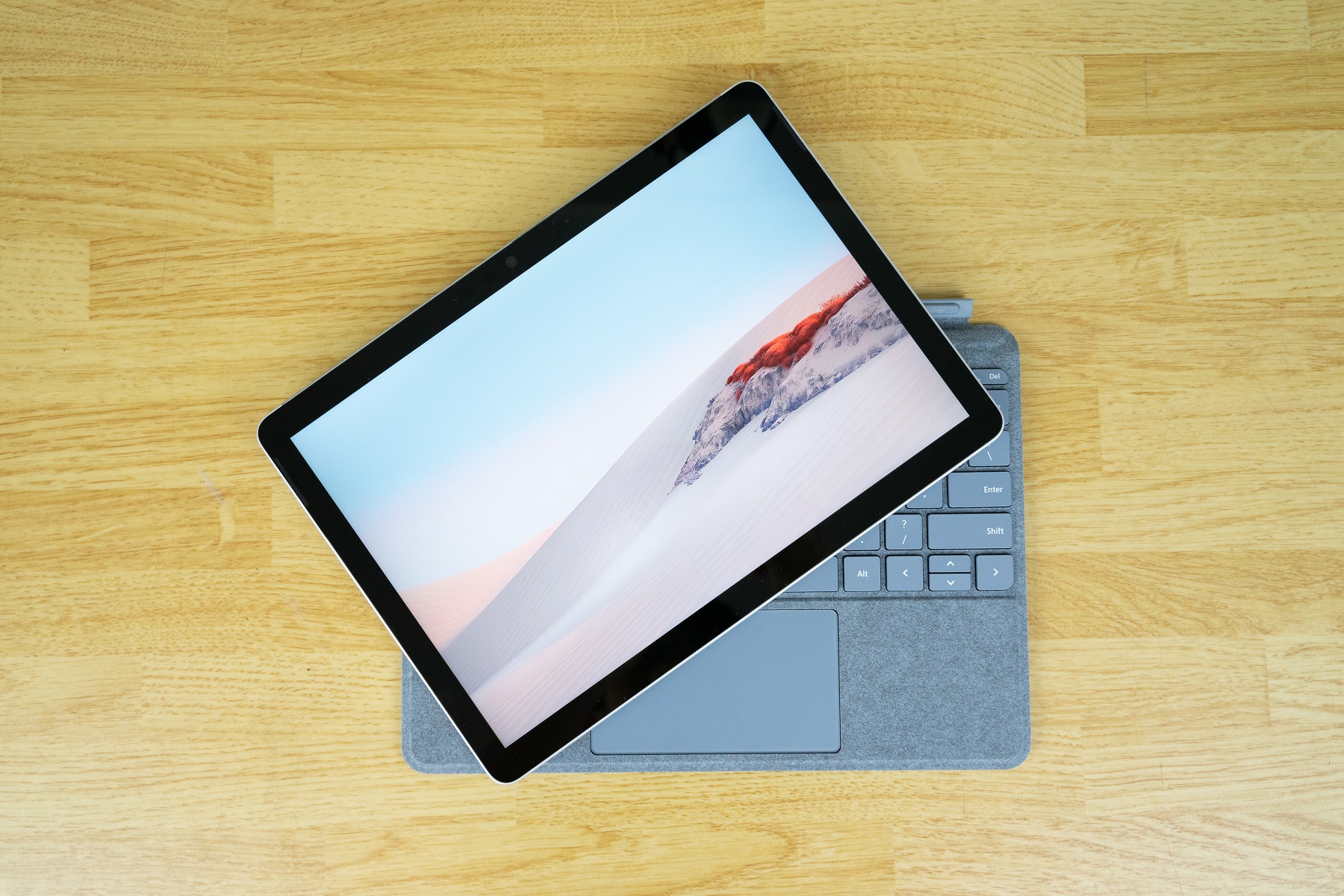 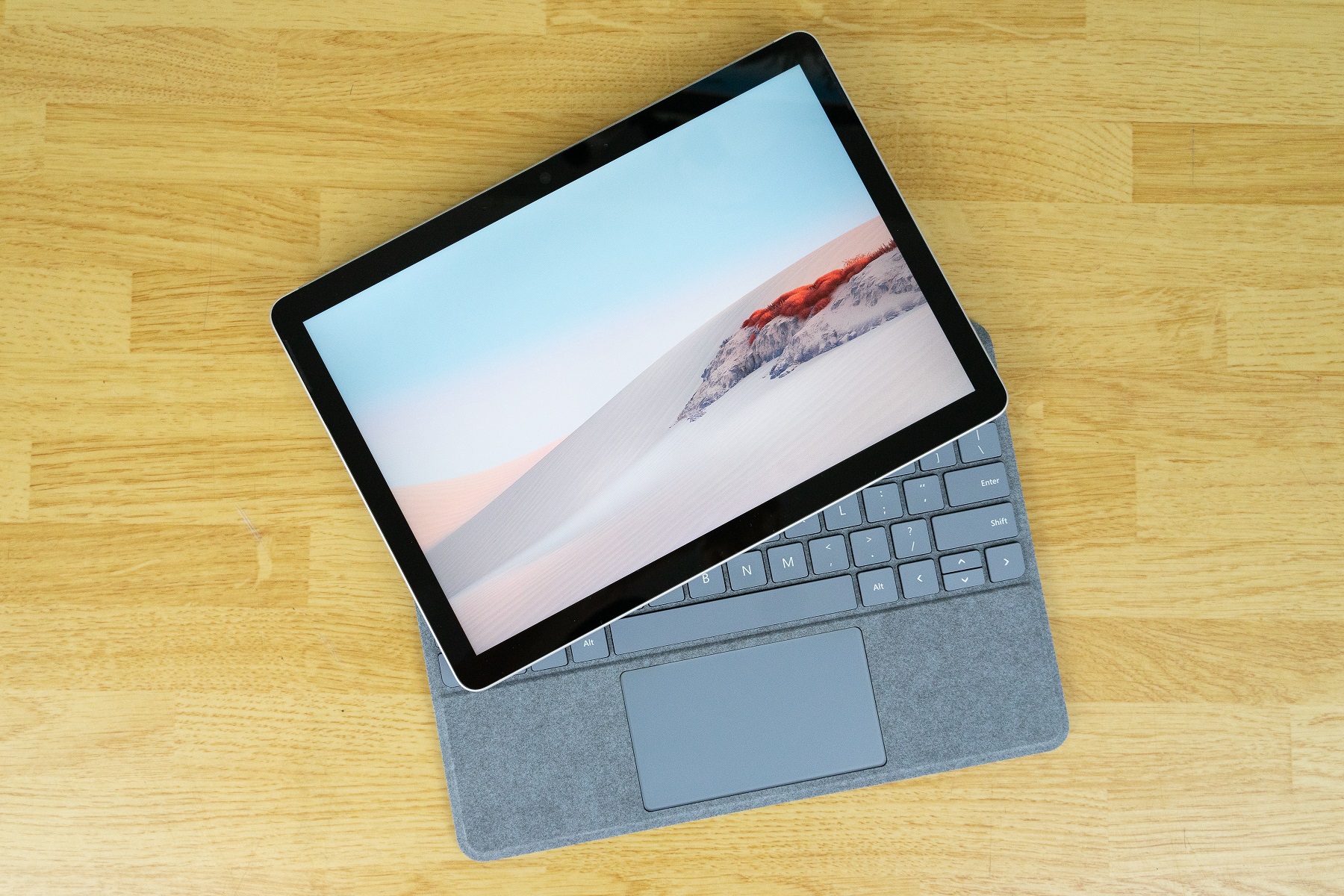 The Surface Go 2 is as nimble as ever. With a weight of just 554g, you won’t ever feel it on your shoulders. Even with the Type Cover attached, it still comes in at just 789g or 1.73lbs. 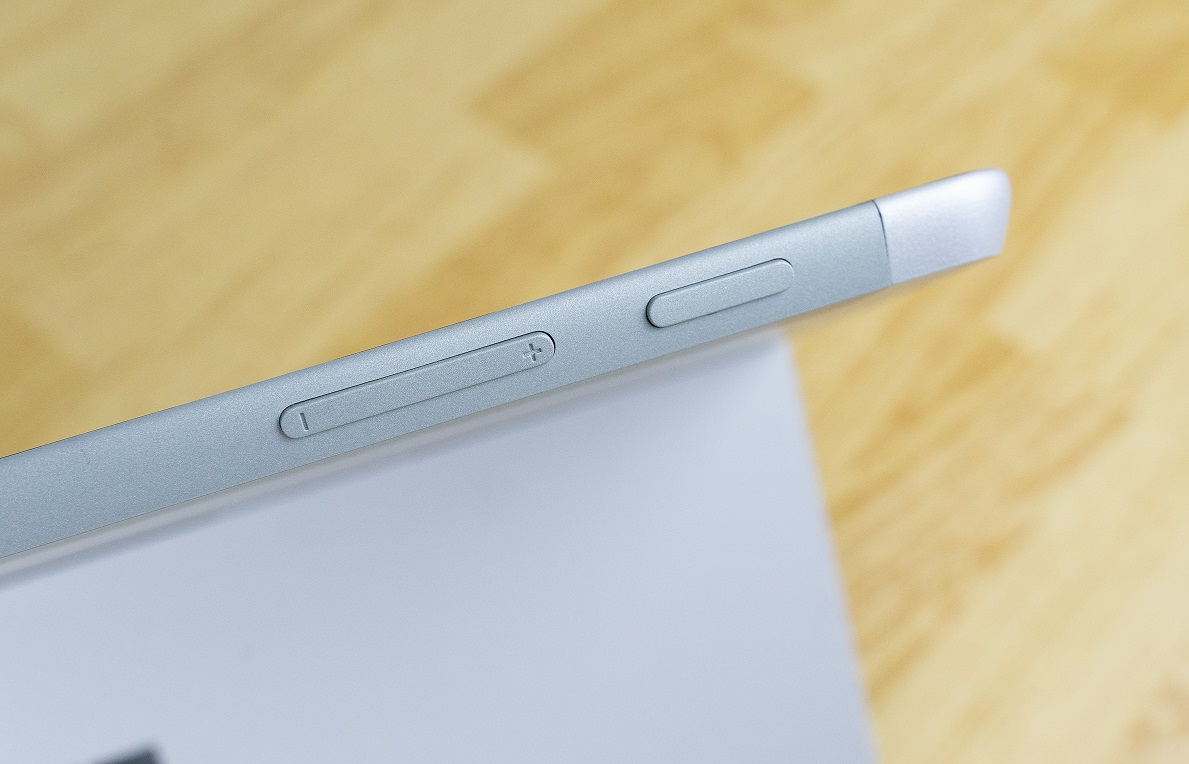 All of its buttons–a power button and a volume rocker–are on the top left corner.

All of its ports – a headphone jack, USB-C port, and the magnetic Surface connect port – are on the left edge. 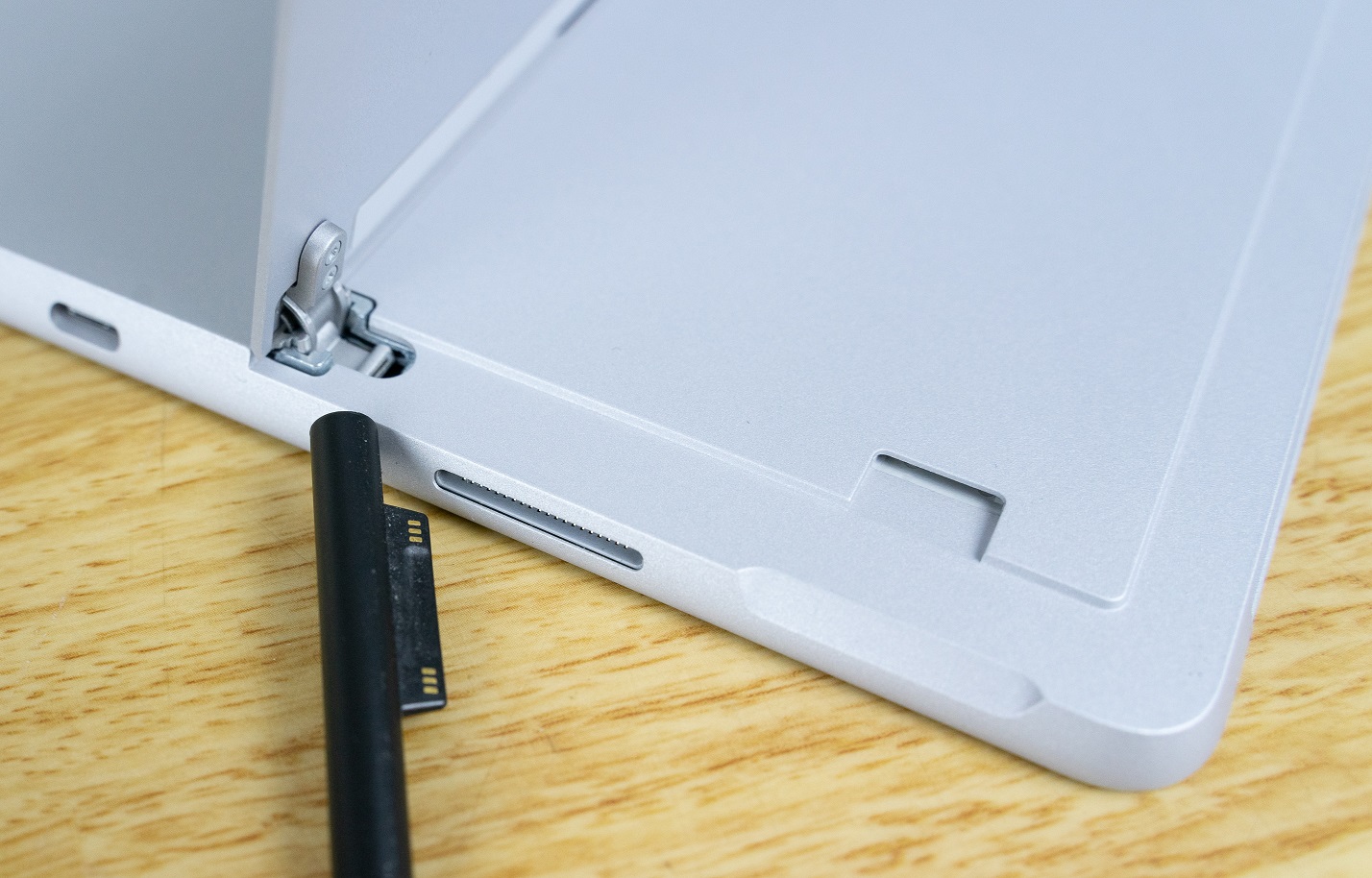 There’s a microSD card slot behind the kickstand. 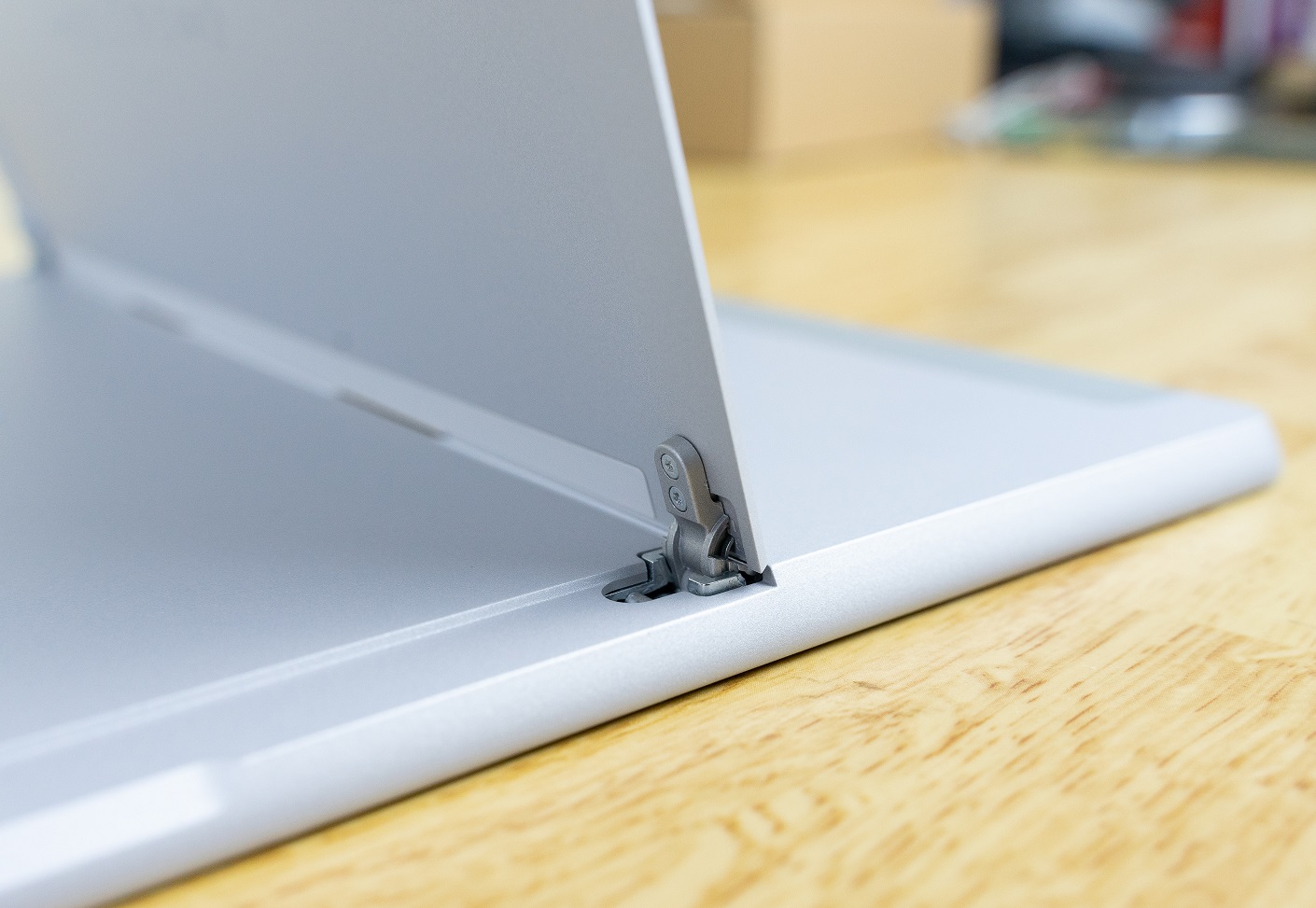 You can freely adjust the position of the kickstand as it doesn’t have set positions.

Resting the Surface Go on your lap is still going to present a challenge as its kickstand extends from the rear. With the type cover attached, the total length could exceed the length of your thighs. At its widest angle, the kickstand props the tablet up for better ergonomics when writing using the Surface Pen. 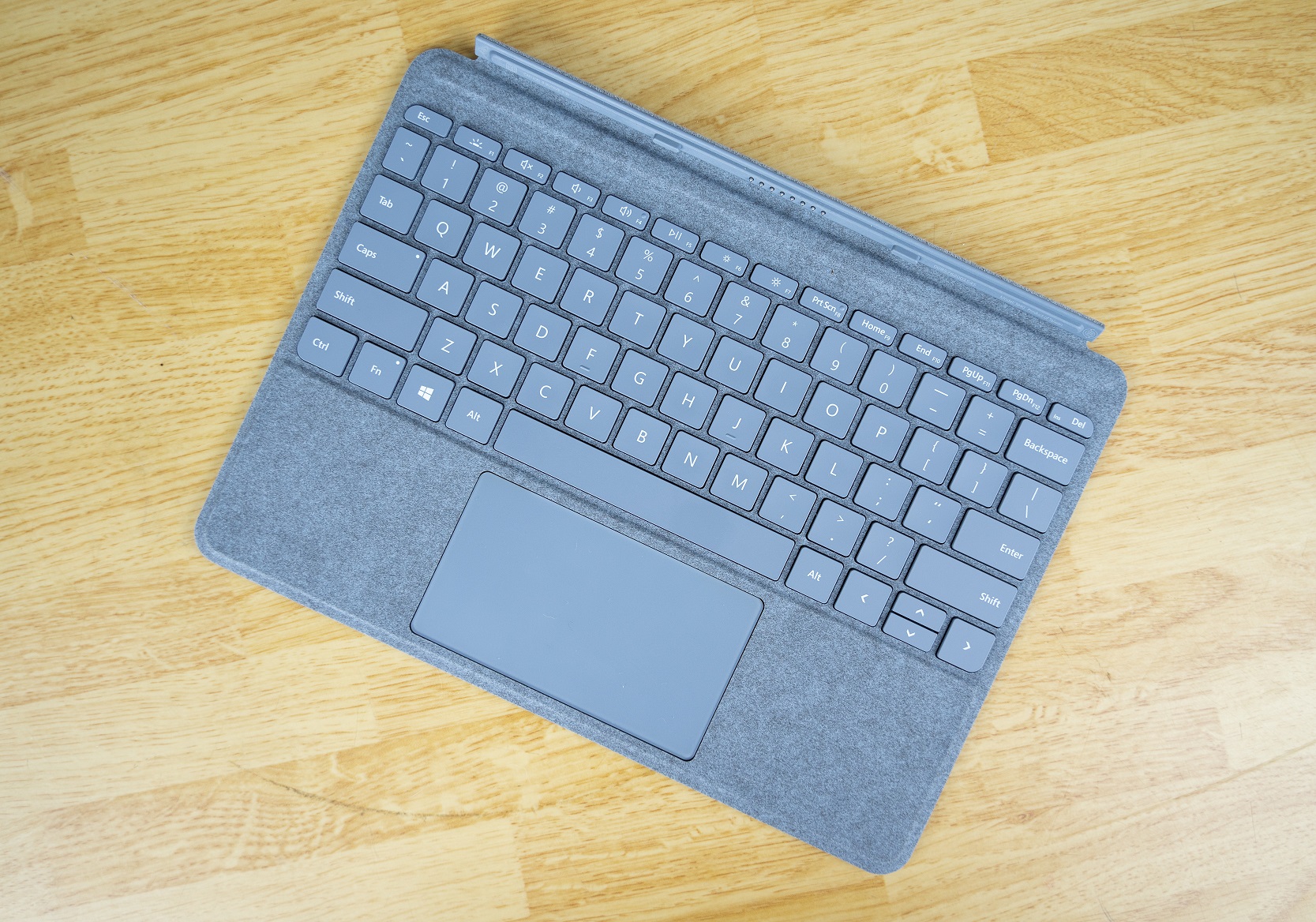 Surprise, the keyboard still isn’t included. The one with the Alcantara fabric shown here is $170. A less colourful microfibre variant is available for $130. 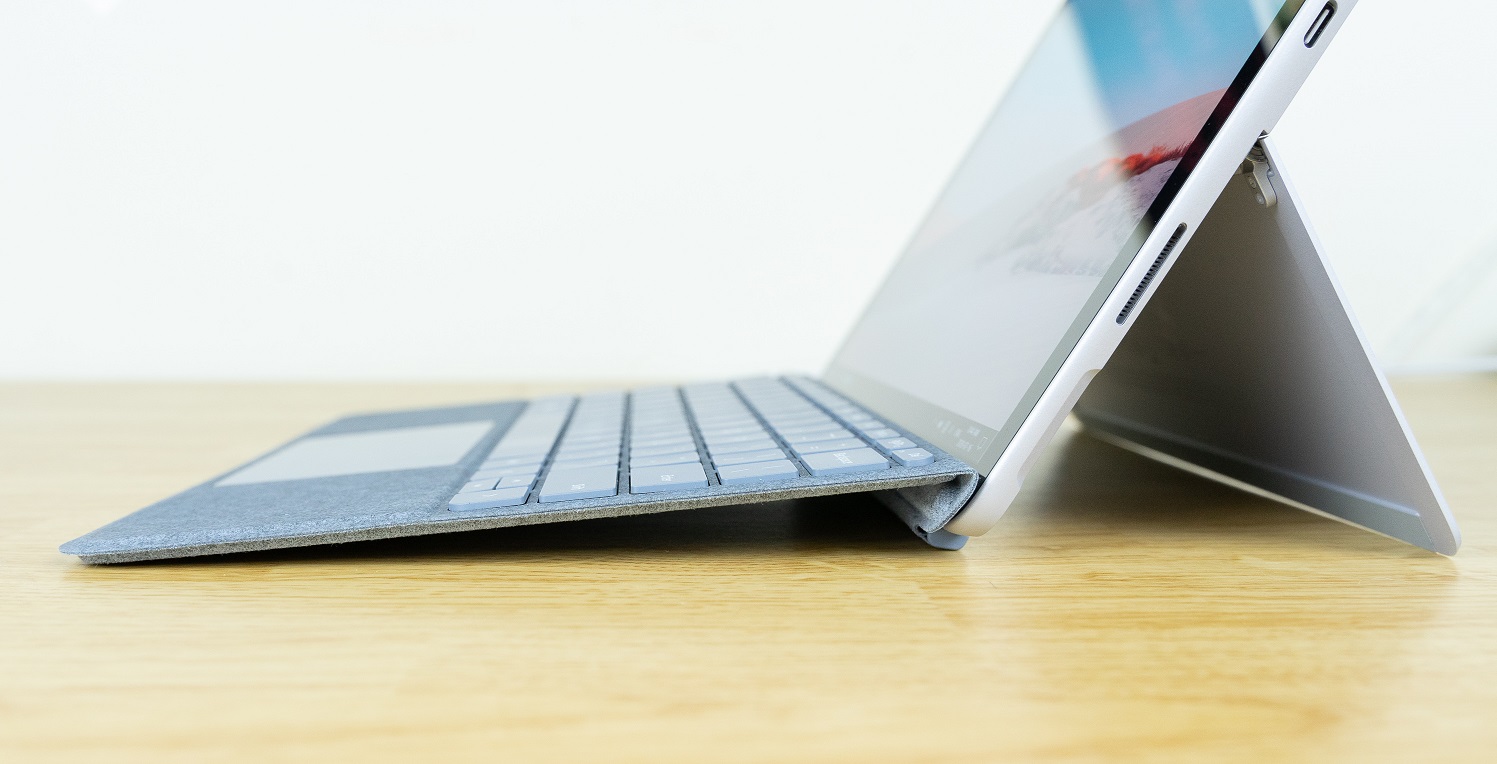 The Type Cover also folds up at an angle to help relax the wrists when typing.

With the teleconferencing booming, the importance of a good front-facing camera cannot be understated. Luckily, the front-side camera on the Surface Go 2 sports excellent fidelity. 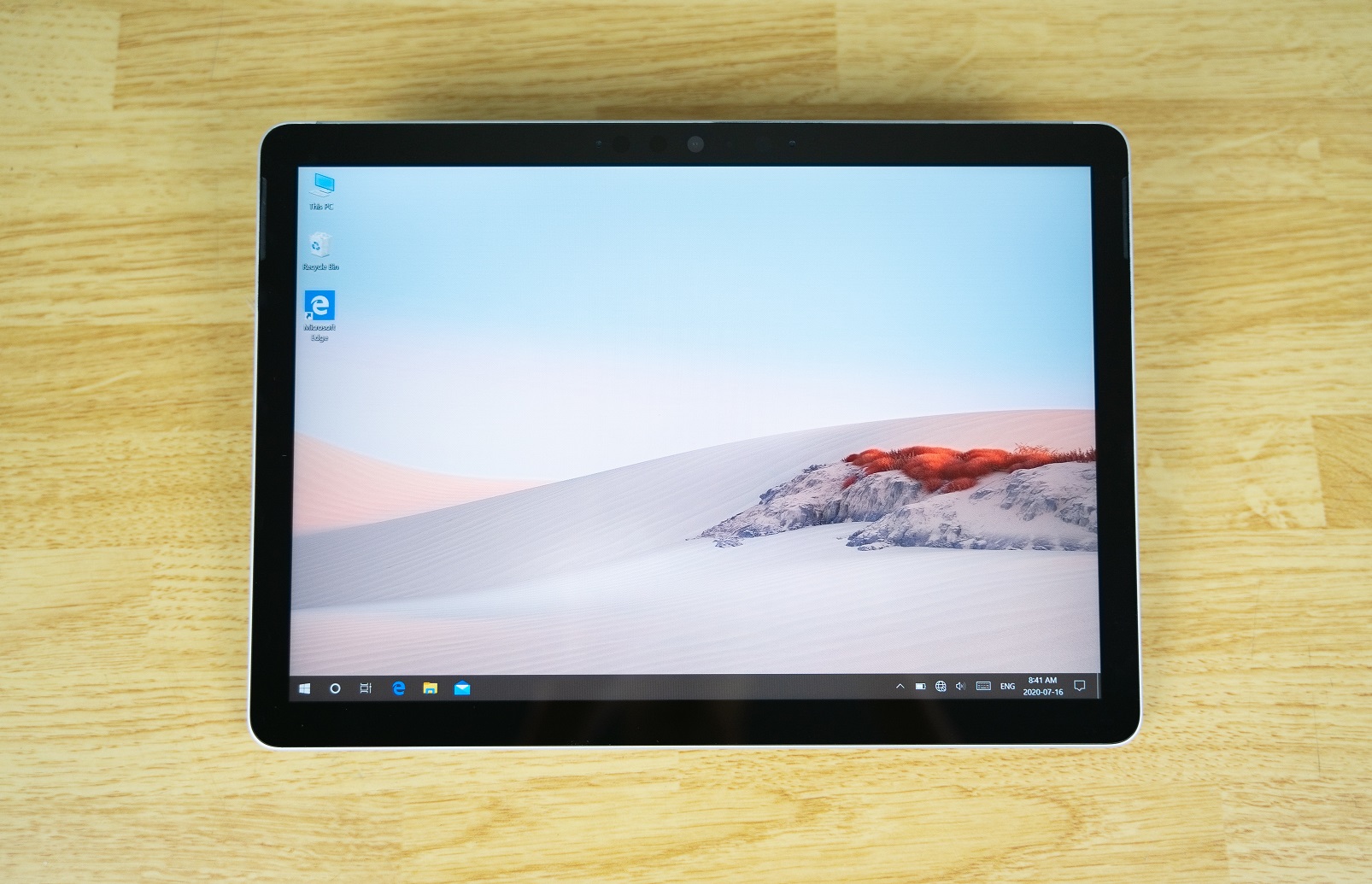 The Surface Go 2 slightly expands the display size to 10.5 inches and bumps the resolution up to 1920 x 1280 for a pixel density of 220 pixels-per-inch (PPI). Microsoft has once again locked the aspect ratio to 3:2 to suit document viewing. Covered with the venerable Corning Gorilla Glass 3, the display should be highly resistant to scratches, an important consideration for use with the Surface Pen. 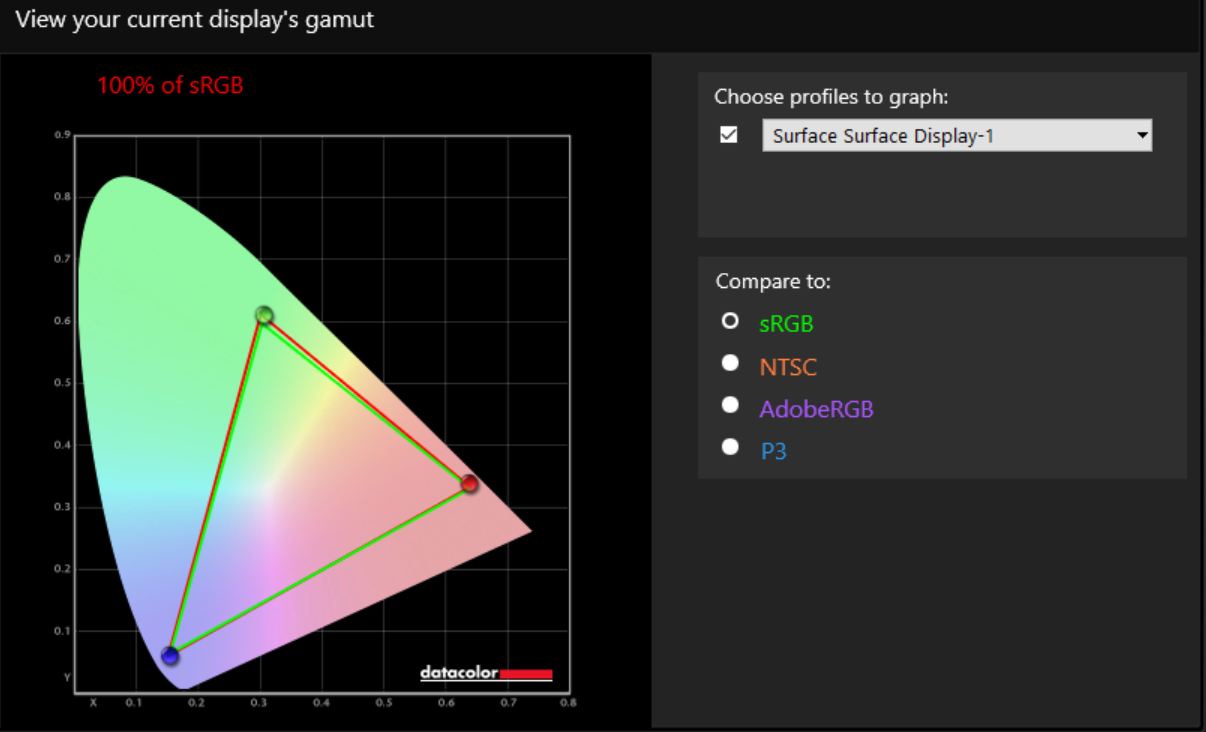 A quick colour test using the Datacolor Spyder 5 Pro colorimeter showed that the display covers 100 per cent of the sRGB colour gamut, making it more than adequate for everyday use and superb for multimedia. In my experience, the display’s performance is excellent, sporting great colours and contrast right out of the box.

Our review unit is one step up from the base configuration, consisting of a dual-core Intel Pentium 4425Y processor, 8GB of RAM, and 128GB of storage.

Clearly, this device isn’t meant for heavy computing, making some of my usual benchmarks meaningless. For example, Cinebench and its Maxxon 3D rendering engine uses AVX512 instructions and would be completely impractical on the Surface Go 2, while any modern 3D game would run like a slideshow. But if you must know, the Pentium Gold 4425Y scored an abysmal 370 and 148 in Cinebench R20’s multicore and single-core tests. 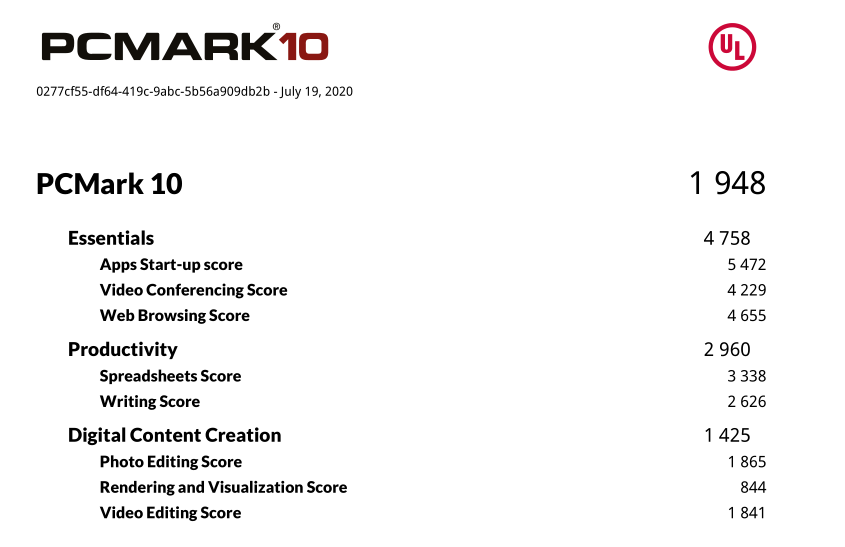 Still, knocking out a word doc or two and sending emails didn’t pose a challenge for the Surface Go 2. But when the background processes started to pile up during a long workday, so did the lags and stutters. By the time to clock out, there were significant delays between my keystrokes and when the character appeared in a Google Doc file.

While the base model still uses the sluggish eMMC storage, all other configurations have been blessed with a blazing fast Toshiba-made NVMe SSD. CrystalDiskMark showed that its speed greatly outpaces the original SATA SSD on the original Surface Go. That speed translated to incredibly low bootup times and file loading times. 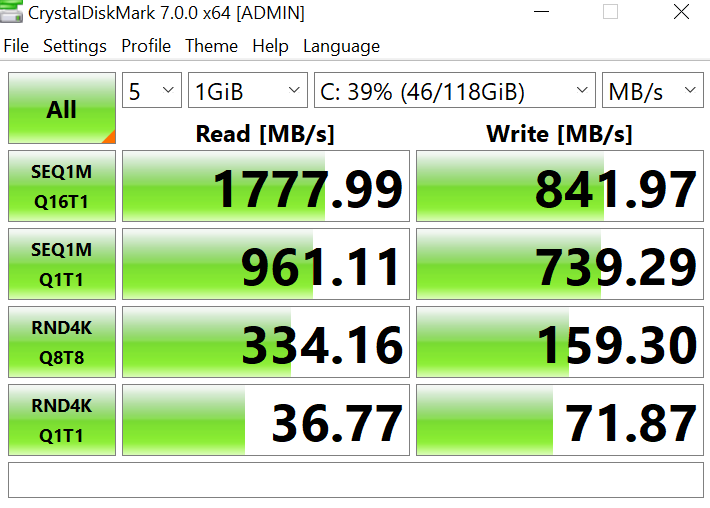 Had Microsoft chosen to use a more powerful processor, then the Surface Go’s small 27Wh battery would have trouble lasting through a full day. Thankfully, the Surface Go 2 was able to run for 9 hours and 40 minutes in PC Mark’s Modern Office battery test before reaching power-saving mode.

Real-world testing revealed similar results. I was easily able to manage a full day of productivity before needing to recharge. With that said, I’d imagine the m3 processors would last a bit shorter.

As always, I appreciate that the charging port is magnetic, and the extra USB-A port on the charging brick itself is handy for charging my phone without needing another port or wall socket.

Microsoft has made great strides in the performance and quality of its Type Cover keyboards, improving their stability, tactility, and trackpad performance over many iterations. Despite being a peripheral for Microsoft’s lowest-end tablet PC, the Type Cover of the Surface Go still comes with an option coated with the premium Alcantara fabric.

My gripe with the Surface Go’s Type Cover isn’t over its quality: although the keystrokes are louder than laptops with a sturdier base, the keys are pleasant to type on and the glass trackpad superb. My main issue is with its small keys and cramped key spacing. While it’s workable in smaller hands, bigger paws may feel claustrophobic, at least initially, when typing on the narrow keyboard.

One glaring issue is the way the keyboard flexes when it’s settled on a soft or uneven surface. When I placed the Surface Go 2 on my backpack during a car ride, the bag’s cushion couldn’t evenly support the weight of my hands on the Type Cover. This caused the Type Cover to bend at the corners, pushing the center part of the bottom edge upwards and causing the trackpad to stop working. This was also replicated when I tried to type on a mattress.

Since the Surface Go is passively cooled, the most noise it’ll produce is the sound of your keystrokes. But since it spreads the heat across the back of the device, it can feel hot in your hands. It won’t affect you when you’re typing, but when you are using it as a tablet, the heat may bother your hand or arm.

Surface Go 2 is bigger and faster, but not more expensive. It still starts at $530–the same as the original Surface Go. That makes sense, though, since the base model’s internal hardware saw little change: you’re still stuck with just 4GB of RAM and 64GB of eMMC storage, and the gen-over-gen Pentium processor upgrade was negligible. Unless you enjoy stalls when multitasking, then I would recommend at least upgrading to the 8GB model for $700 or upgrade to the Intel Core m3 equipped variant altogether.

But know that the base cost doesn’t include the Type Cover keyboard, an “optional” add-on that’s practically a must-have. This tacks on another CA$130 at least, pushing up the starting price up to $660. If you step up to the Intel Core M3 model, you’ll be paying $980 ($850 plus $130). However well-made it may be, I can’t comfortably recommend spending that much when there are plenty of other value options available at a similar price range.

Despite being a budget device, the Surface Go 2’s build quality outclasses any other device in its price range. 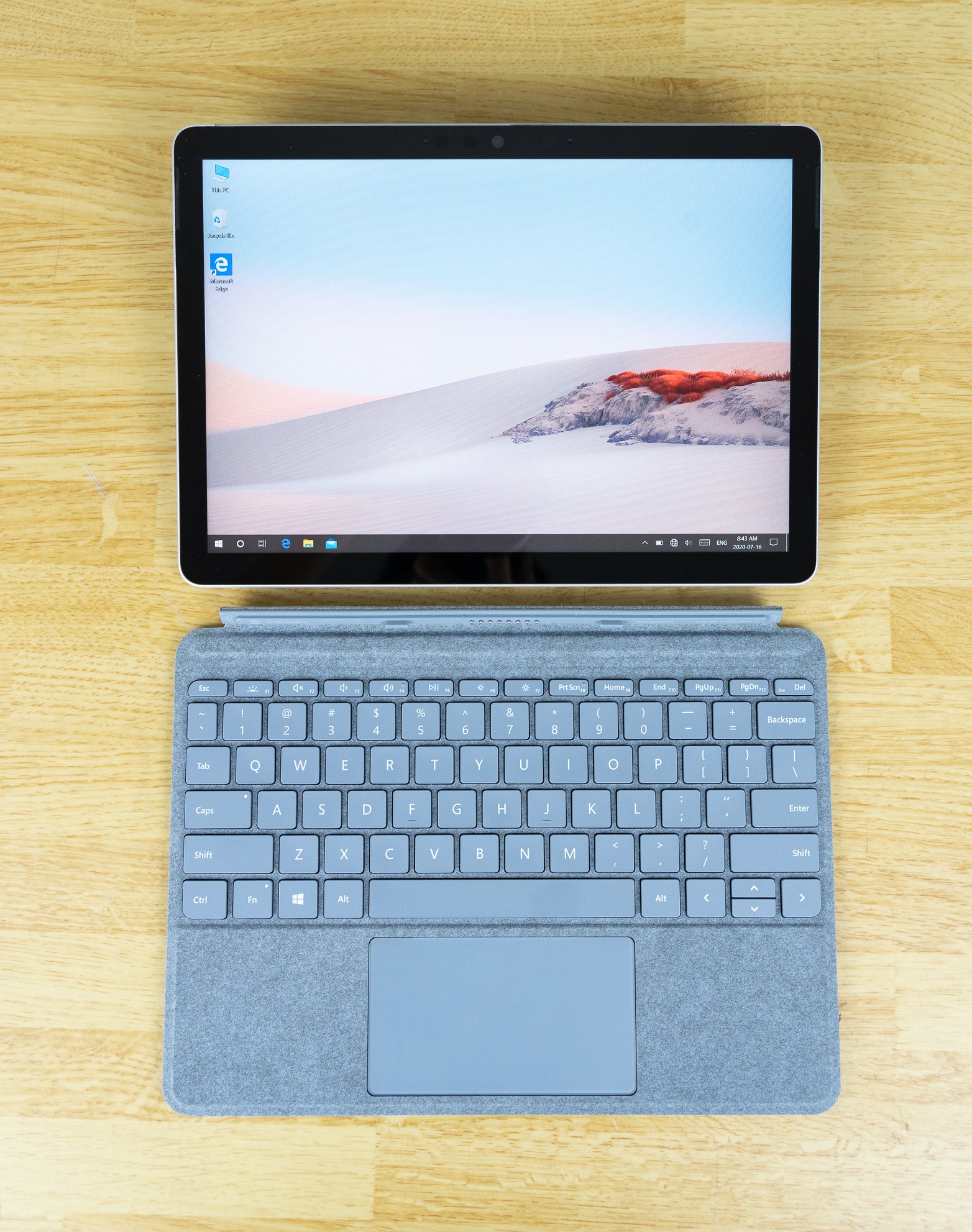 In the enterprise environment, the Surface Go’s purpose is to be a device that can be easily deployable and managed, offers enough computing power to handle the most basic tasks, and cheap enough to be purchased en-masse. It naturally lends itself well to classrooms and a plethora of enterprise and first-line applications.

But run anything beyond the bare essentials and the base model could struggle to keep pace. And if you have large hands, then you may find it difficult to home in on the correct keys on the dense Type Cover, which is sold separately. With a solid front-facing camera and a power-sipping processor, it has all the essentials for students to complete their school assignments and attend virtual classrooms.

Tom Li
Telecommunication and consumer hardware are Tom's main beats at IT World Canada. He loves to talk about Canada's network infrastructure, semiconductor products, and of course, anything hot and new in the consumer technology space. You'll also occasionally see his name appended to articles on cloud, security, and SaaS-related news. If you're ever up for a lengthy discussion about the nuances of each of the above sectors or have an upcoming product that people will love, feel free to drop him a line at tli@itwc.ca.
Previous articleSource code from big-name companies leaked online
Next articleShaw Communications to launch exclusive mobile service in Alberta and B.C.