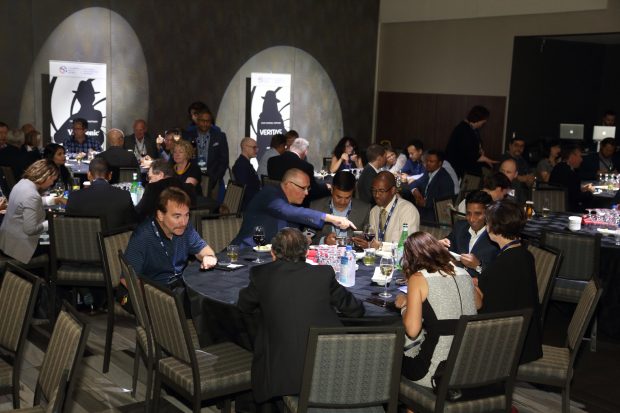 TORONTO — A lot happened Sept. 19. The inaugural Channel Innovation Awards, a new event celebrating the innovative solution providers making a direct impact on Canadian businesses and communities, made its debut. More than a dozen organizations across the country were recognized for their winning solutions. From unique systems developed to protect Canadian digital history to the use of artificial intelligence to meet the needs of a busy homeless shelter/drop-in centre in Calgary, there was no shortage of inspirational stories that reflected the best the channel has to offer. Prior to the event, however, the Canadian Channel Chiefs Council (C4), the voice of technology channel professionals in Canada, gathered together for an afternoon of discussions and exercises circling the bustling channel community. Here, we have collected some of the day’s most memorable moments. (All photographs for CDN by Paul Darrow).

The Canadian Channel Chiefs Council (C4) is the voice of technology channel professionals in Canada, and on Sept. 19, new and existing members of the not-for-profit gathered together for an afternoon of discussions and exercises circling the channel community. The workshops took place prior to Computer Dealer News’ inaugural Channel Innovation Awards. New and existing C4 members had the opportunity to introduce themselves, provide feedback for C4’s new education series introducing the channel community, and talk openly about some of the challenges they and their sales team face in the market. Pictured above, Corinne Sharp, president of the C4, welcomes C4 members to the meeting.

The state of the channel is always changing. Steve White, vice-president of worldwide channels and alliances research for IDC, pointed to some research that shed some light on channel predictions. Subscription-based products have helped alter the customer journey, changing the way technology gets into the hands of individuals and organizations. This doesn’t render the channel community useless, said White, but it has forced channel players to rethink their strategy. Partnerships and collaboration will become increasingly important. By 2021, 50 per cent of G2000 organizations will form alliances with technology partners and 30 per cent of purchasing will be driven primarily through strategic industry and innovation ecosystems. By 2020, P2P-collaboration-driven initiatives, will account for at least 30 per cent of revenue generated among leading cloud partners. In addition, IoT is becoming a mainstay in the partner ecosystem – IDC suggests that by 2020, more than 70 per cent of infrastructure-centric partners will become involved with IoT in edge development.

How do you define the different type of channel partners out there? That’s what leaders in the partner community tried to figure out at the C4 workshop ahead of the CIA awards organized by Sharp and Jim Love, ITWC’s CIO. C4 members were asked to write down what they thought various labels – such as value-added resellers, managed solution providers and distributors – meant to them and how they connect to each other. The session concluded with an open discussion about the many labels, in addition to the current challenges sales teams face in the channel. One of the recurring messages from the discussion was about how sales teams should focus less on touting a solution’s specs and features, and instead convey exactly how it will solve a customer’s problem. Everyone thinks they have the fastest server, said one member, but how will it actually solve customer’s problem?

Twenty organizations from across the country were recognized for the creation of solutions and services that, thanks to unique value propositions, are positively impacting partners and channel customers across Canada. The inaugural CDN Channel Innovation Awards recognized projects ranging from unique systems developed to protect Canadian digital history to the use of artificial intelligence to meet the needs of a busy homeless shelter/drop-in centre in Calgary. Audience members also got to participate in a mini tech-inspired scavenger hunt sponsored by Veritas. CDN’s social media streams showed were home to a number of selfies, suggesting that self-confidence is not a problem in the channel.

David MacDonald, member board of directors at In the Chat Communications Inc and Softchoice – and CIA judge – took to the stage to talk about where he sees the Canadian channel heading. His career has included 18 years at Xerox Corporation in Global roles and 16 years leading Softchoice. MacDonald said channel players are “caught between huge forces,” pointing to bleeding edge technology hitting the market on almost a daily basis, and subscription models that have completely changed the way customers purchase technology. “Applicants that were successful were transitioning, adding value and moving to the cloud,” he explained. “Congratulations to tonight’s winners for figuring out how the future is going to look like.”

The channel is changing, and so is Computer Dealer News. IT World Canada’s editorial director, Brian Jackson, helped unveil CDN’s rebranding efforts, announcing that, very soon, CDN will stand for Channel Daily News. It’s more than a name change with a new URL and logo. The rebranding will be accompanied by more videos, improved search capabilities and a new channel directory that will help readers and business leaders find channel players quickly.

Legacy vendors in the IT infrastructure monitoring space beware, Paris-based Centreon Software Systems – which was also a CIA sponsor – is opening up shop in North America and it wants channel partners to sell its open source solutions. Centreon’s solutions, specifically its flagship Centreon EMS solution, are for both enterprises and SMBs, said Centreon co-founder Romain Le Merlus, who is now the CEO of the company’s North American operations. Le Merlus (pictured above, middle), one of the event’s guest hosts, talked about his commitment to growing the business in Canada while on stage. “Last month, I relocated my family to Toronto,” he told audience members. “We have already built a strong market presence in Europe, and I’m confident that together, we will do the same in North America.”

Systems integrator Sierra Systems took home the most sought after award of the evening – Solution Provider of the Year. The Vancouver-based firm also scored the Disruptor of the Year award, a Diamond Award for the Top Data Management Solution, and a Gold Award for Top Channel Marketing Initiative. Other multiple award winners were Konverge Digital Solutions, Zycom Technology, and Softlanding Solutions. Tidal Migrations, a cloud migration firm, was recognized as the Next Generation Chanel Innovator. For a complete list of winners, click here.