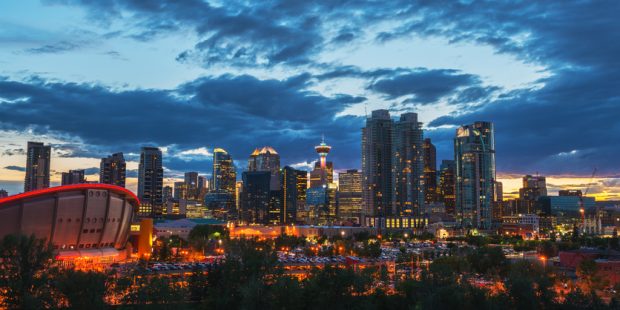 “The fault, dear Brutus, is not in our stars / But in ourselves, that we are underlings.” – Julius Caesar, Act I, Scene III

Calgary, the historical heart of the Canadian oil and gas industry, is at a once-in-an-epoch inflection point that will determine our destiny for this next millennium and beyond. Traditional energy sources and technologies that have powered the creation of wealth and opportunity in Canada for multiple generations are now caught in an existential struggle between the past and the future. New energy alternatives promise a road to a utopian future but provide limited answers for the present. Transformational solutions brought to market by leading advocates are often not grounded in the reality of present-day economies, geopolitics or communities.

Perhaps the solution to this challenge lies in the same energy and pioneer spirit that hewed boreal forests into the world’s breadbasket and carved the Canadian energy economy out of the frozen tundra; the spirit of Calgary. When purposefully applied to solve this next challenge, this spirit of innovation can lead to a future that is both prosperous and equitable, and where economics and the environment are complementary objectives and not contradictory impulses as presented in popular politics and media folklore.

For us to compete, indeed, to survive, in the 21st century, all of us – oil and gas enterprises, governments, civic society organizations; must come together in a common purpose to define our universal future.

On December 5, 2019, Brian Stewart, Deputy CIO at the University of Alberta and Helen Wetherley-Knight, CIO at the Calgary Drop-In Centre will join 20 of Alberta’s most influential digital leaders at Highrise’s Time & Life; an invitation-only black-tie exchange about the future of Alberta’s digital economy.  We caught up with Helen and Brian in advance of the discussion to examine the province’s current digital divide.

Given the predominance of oil sector workers in Alberta’s labour pool, the question of a just transition is top of mind when the topic of economic equality comes up. What are real-world examples of work your organizations are doing to support and include oil & gas workers in the transition as economies reduce greenhouse gas emissions?

The downturn in the market has given the Calgary Drop-In Centre a unique opportunity to have high caliber volunteers working with us to help digitally transform operations at the DI. Many people that I used to work within the Energy sector have lent their tremendous skills to the DI’s IT team, by way of donations, mentorship of practicum students, volunteering in the DI’s Computers for Low-Income Calgarians (CLIC) Lab or by building training and process documentation. In some cases, the volunteers were between roles and benefited by adding an exciting volunteer opportunity to their resume, and in other cases, they were still gainfully employed but jumped at the chance to give back to their community.

The partnership between the DI and Energy workers has stayed strong in the downturn, proving to me once again that Calgarians have the resilience to keep adapting to changing models, and never leave a struggling community member behind.

What parameters are missing when it comes to bridging the divide between public and private investment in societal benefit? Anxieties over privatization and government overreach can leave both sides of the issue at odds over the utilization of public and private dollars in concert. Can these vested interests be harmonized to move beyond short-term thinking and into long term cooperation?

Every level of government has worked hard to alleviate societal disparity, but the technology has only now caught up to the point that data can drive the work home. Cloud technology has given us a new opportunity to federate disparate data sets and use analytics to better identify the predictive factors leading to the risk of homelessness. By using APIs we no longer need to mandate a shared CRM, we can securely link encrypted data sets and better prioritize service delivery for those experiencing homelessness.

We aren’t very far away from being able to better arm Doctors, Clinics and Emergency Shelters with the knowledge to move beyond treating the symptoms of poverty to become successful at diverting people from experiencing homelessness in the first place. People experiencing homelessness spend more time in emergency rooms, more time in hospitals, and have a higher likelihood of returning to the hospital than people with homes, so a great way to save our public health care system is to invest in homes and services that keep people in homes.

The battle lines have been etched deep into our consciousness and political positions. Little stirs the emotional tide like the debate on the distribution of wealth and earnings. It’s an intellectual conundrum that has engaged the finest economic and philosophical minds in the classical and modern periods.

We are now faced with another period where the distribution of wealth appears to be on an increasing divergence between those that have and those that don’t. The World Economic Forum reports that the top 0.7% of the Worlds population possesses 41% of the World’s wealth, while the bottom 69% own only 3% and this divergence is decreasing. These are staggering disparities in wealth positions and the question as to who pays for public goods becomes increasingly relevant and problematic.

If taxes are not progressive and seek to redistribute to enable a greater sharing of the overall available wealth, they in effect reinforce the ever-increasing divergence. Then who has the economic wherewithal to contribute to the costs of funding public goods? While we have not reached a breaking point in this tension the pressure is increasing and public infrastructure and social programs are eroding and being displaced by private alternatives that are not designed to be in the interests of all.

The example of the privatized US prisons is a pertinent reminder of what can happen when a private one replaces a social objective. This is not to say that either is better or worse, just that they are different and fit within their appropriate context. The decision to harmonize the differing interests is part of the responsibility of the democratic systems we live in. We have the power to change the current trends by using policy to redirect the flows of income to the most efficacious use for society. “The fault, dear Brutus, is not in our stars / But in ourselves, that we are underlings.” (Julius Caesar, Act I, Scene III, L. 140-141)

Much has been said in the corporate world as of late regarding the “triple bottom line” framework. The triple bottom line is a framework that recommends that organizations commit to focus on social and environmental concerns with equal passion and vigour as financial considerations. What are some best practices organizations can implement to weigh social and environmental impact equally alongside profitable business growth?

The current management zeitgeist of enhancing and maintaining organizational focus on fewer objectives to ensure their achievement would appear to conflict with the concept of the triple bottom line. How can you serve three masters, people, profit and planet? What are the trade-off criteria that determine which one takes priority over the other two? The simple answer is that you can’t, there will always be a primary a secondary and tertiary. The hope can be that these rankings may not be constant and may shift depending on particular circumstances, as in a Maslovian hierarchy, where satiation leads to a higher-order goal. But again, what is the baseline satiation, which one has to be achieved before we can look to the others.

Many would say profit before people or planet as the sustainability of the business is dependent on a level of profit. Fair enough in theory, but most businesses don’t make enough profit that allows them to claim they are sufficient and to move to prioritize a higher-order need. And if people are the second priority, and perchance manage to receive some of the largess, when will they cry uncle and say the rest can go on the planet?

Another concern here is the issue of greenwashing where the whole thing is a public relations exercise designed to provide nice graphics and messages on annual reports and shareholder meetings. What may help us here is evidence, more simply data. What does the data tell us about the outcomes of self-proclaimed three liners? Unfortunately far from solving the problem data creates a new one. What are the acceptable metrics? The profit we know, it is well understood and used in the business world and is generally understood by a nation’s citizenry. What is less clear are the measures for people and the planet, what are the most effective metrics and targets for these concepts? How do we know we are doing good rather than additional harm? Do we understand the systemic impacts and long-term outcomes of the targets we are setting for these bottom line cohabiters?

We have not developed effective measures and metrics for the more vague terms of people and planet and likely never will. They do not work in the same calculus as profit, they are not accounting identities, they are far more difficult realities. In short, they are living things, not concepts developed by the human imagination, they do not follow logical rules within defined scopes, they are messy, irregular, inconsistent, and complex to the point of chaos. Trying to measure this in an annual report requires a reductive approach that is ultimately self-defeating, as we will end up with a facile descriptor that serves to distract more than illuminate.

The challenge is far from defining best practice, but to defining an acceptable practice that has general repeatability and proven benefits. And one that we can challenge those organizations that claim they have adopted and are operating with a triple bottom line to meet external targets that have real meaning and generate material betterment.