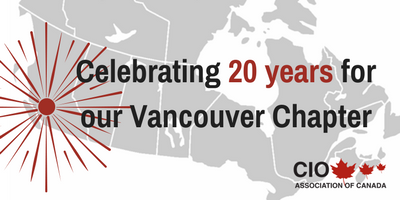 Oh how far we have come in twenty years as CIOs

At the time of the Chapter founding, IT was relegated to back office and while business considered it an operational necessity. In 1998, I saw a need for CIOs to network, exchange ideas and learn from each other’s experiences.

As Founding President, with committed board members like Jim Williams (CIO of A&W) and Dr Blaize Reich (Professor at SFU Beedie) we started the CIO Association of BC (CIOABC).

Later on, it expanded across Canada and a national organization, the CIO Association of Canada (CIOCAN) was established which now has over 400 CIOs as members across Canada. CIOCAN not only provides a place to exchange ideas and share experiences, but it was part of a major movement which reinforced the need to ensure that CIOs had a meaningful and strategic role to play at the senior management table.

Just twenty years ago, the title Chief Information Officer or CIO was not common and even those who had the title jokingly said that it stood for “Career is Over”.

At that time senior management considered IT as a black hole, where  IT projects were inevitably late and over budget. IT was rarely represented at senior management meetings and requirements for new systems were given to IT to operationalize rather than discussed as a partner. The CIO’s main function was to translate the technical gobbledygook to something the senior management and board members could readily understand.

The role of IT, as well as the role of the CIO have evolved dramatically.  The pervasive use of technology in society, let alone the business environment, has brought so many more very critical and strategically differentiating issues such that every business has to deal with them well and in a timely manner or perish. Technology is part of everyday life! At a recent conference I attended, the audience was asked if they had a choice between losing their smartphone or their wallet, which would they choose. The majority of the audience would rather lose the wallet than their smartphone.

Over the past 20 years the CIO’s role changed from the corporate herder of IT talent and explainer of IT black boxes, to making sure the corporation is ahead of its competitors, able to attract the right kind of people, and maybe more importantly, staying out of trouble in areas such as online presence, data security, and privacy. In addition, the CIO today is a business leader, just like other heads of departments such as Marketing, Finance, Operations, etc, the CIO just happens to be responsible for business technology. It is the one position in an organization that is required to have an understanding of each and every other department, so that seamless information flows unencumbered.

And yet when I look at one of the first brochures of the CIOABC, the discussion topics have not changed that much. IT staffing, implementing reliable systems and managing data are still challenges for CIOs.  However,  these are now the responsibilities of the full senior leadership team including the CIO.

Today the CIO’s role is much more than making sure that the organization has the right IT system, what used to be called the Apple vs IBM decision.  Now IT is not only the oil that keeps the business going but also deals with issues such as how the business can leverage social networks; the need to protect the security of customer data and how to deal with old legacy IT systems while implementing new ones.  It is no longer about black boxes and technical gobbledygook.  IT is of strategic importance that can make or break an organization, a society and sometimes even effect elections.

Over the past twenty years, CIOs began to take notice of CIOCAN, particularly due to a National mandate that was focused solely on IT-business leadership. One key differentiator is that CIOCAN offers a safe haven where CIOs can discuss common issues in an open and sharing manner while being shielded from vendors’ marketing initiatives.

It continues to be a unique association establishing new local chapters regularly since its inception. CIOs from small and large organizations see value in being members and participating in local and National events such as the upcoming Peer Forum in Vancouver this coming April 10-11. It was a dream that was championed initially by a committed few, and today is shared by hundreds.