You’re not alone in your IT transformation journey, EMC report shows

Very few IT shops that are customers of EMC Corp. or VMware have achieved their vision of running their departments like a customer-focused business, but are at least making progress towards that goal, according to a new report from the technology vendors.

The report, done based on survey responses from participants in a workshop dedicated to IT transformation, offers an analysis of companies that are currently finding their way from a legacy model of running the IT department to one that’s more akin to a modern service agency. The surveys cover 353 companies that participated in workshops between 2014 to mid-2015.

The workshop participants agree on two things – 90 per cent wanted to achieve a documented strategy and road map for their department, and 95 per cent want an IT organization with no silos. Yet actually achieving those goals was more difficult for most, with only 39 per cent saying they have the road map, and just four per cent saying they’ve eliminated silos.

The complete report may offer solace to other IT leaders that are in the midst of their own transformation projects. As organizations look to integrate cloud models into their operations to reduce costs and free up workers, the road isn’t always a straight path. It also gives a point of comparison to where some other IT operations are on their transformation path. Here’s a breakdown of some of the survey highlights:

Hybrid cloud in its infancy

The vast majority of companies implementing a hybrid cloud infrastructure are still in the early days of the process, evaluating the technology or doing a proof of concept. Even for those that are ahead of the pack, only a few apps are 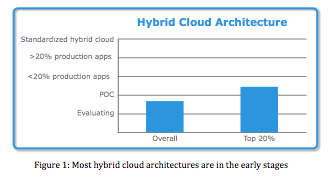 actually running on a hybrid cloud infrastructure so far. Organizations are also struggling to find a way to evaluate what workloads should be placed on the hybrid cloud, doing so on an ad hoc basis.

IT as a service

Companies have a lot of work to do when it comes to delivering their services to the line of business in an automated, on-demand approach. Very few IT departments feel that they have the skills on staff currently to define business-facing services and implement them with cloud technology. There remains a big gap in IT’s ability to efficiently manage requests via a self-service portal or catalogue, with 76 per cent of companies saying there’s no such portal in place, or it is very undeveloped. IT departments also report struggles in attaining cost transparency and knowing how much of their services are being consumed by what line of business. 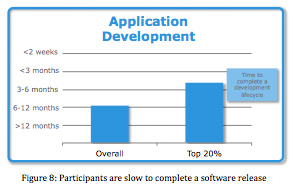 While IT departments agree they want to achieve a consumer-like model of quickly developing and delivering apps to their business users, they’re finding it difficult to achieve. Only 18 per cent say they have a scalable and infrastructure independent app framework, and more than two-thirds are still taking as long as 12 months to complete a new app development lifecycle.