Microsoft Windows 11, launched this week, offers a new user interface, some shiny new features, and some things that will have both consumers and corporate IT tearing their hair out.

Mind you, as with any early announcement, pretty much everything is subject to change, with the possible exception of the name (and even that may not be sacred – I still treasure a Windows NT 5.0 branded shirt I got at a media event for a product that was called Windows 2000 when it shipped).

But one thing is certain: don’t count on your Windows 10 machine being capable of running Windows 11. Windows 11 is fussy about its hardware – it is 64-bit only, runs on 8th generation Intel CPUs or newer (check the supported CPU list for specifics), and demands UEFI/Secure Boot and TPM 2.0.

Some AMD processors are also supported, and ARM64 support is baked into the OS. Run the PC Health Check app to see whether your system is supported.

(Update, June 28: After many complaints from users, Microsoft has now pulled the PC Health Check app to do more work on it. They say it will be back before Windows 11 is generally available in the fall. Meanwhile, use the system requirements documentation.)

Do you really need to buy a TPM for Windows 11?

If it will run on your machine, Windows 11 will be a free upgrade to Windows 10 systems. Microsoft says it will roll out “this holiday”.

The first thing you’ll notice is that UI elements are no longer squared off as they are in Windows 10. Now all corners are rounded, though not to the rather cartoony extent that Windows XP was.

Rather than being left-justified, Taskbar icons are centred and the Start menu pops up in the middle of the screen. As well as the usual pinned apps, there’s a section at the bottom of the Start menu with a list of recommended apps on the left, and what looks like the most recently opened documents on the right. 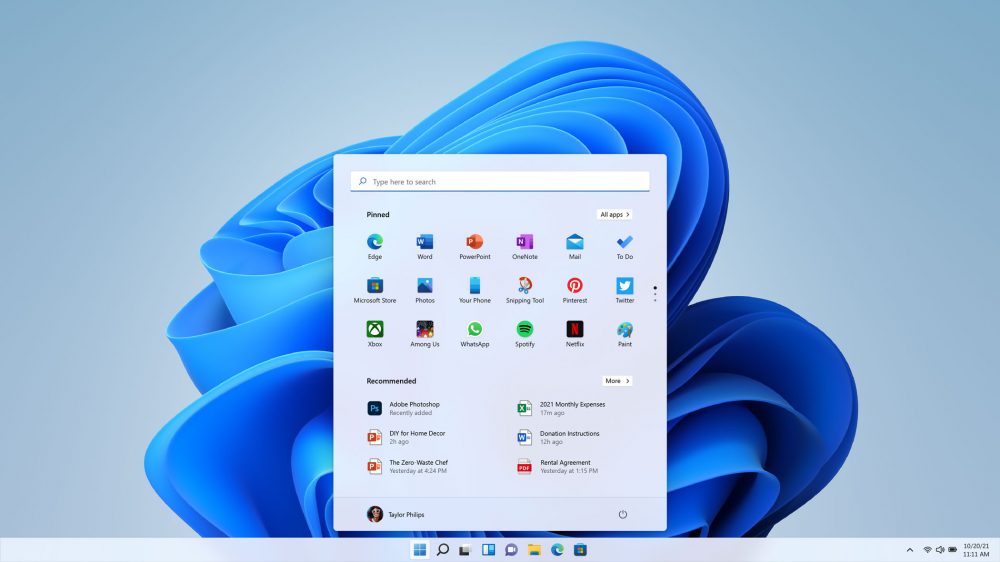 Not only will it show you the documents you opened in Windows, but Microsoft also says it will display those opened on any platform, including Android and iOS. This happens through the magic of the cloud; unlike previous versions of Windows, Windows 11 Home at least demands that you sign on with a Microsoft account, which means you must be online during the initial setup.

There’s no word yet on how this will work for enterprise customers, although Microsoft did say that Windows 11 is managed the same way with the same tools as Windows 10. 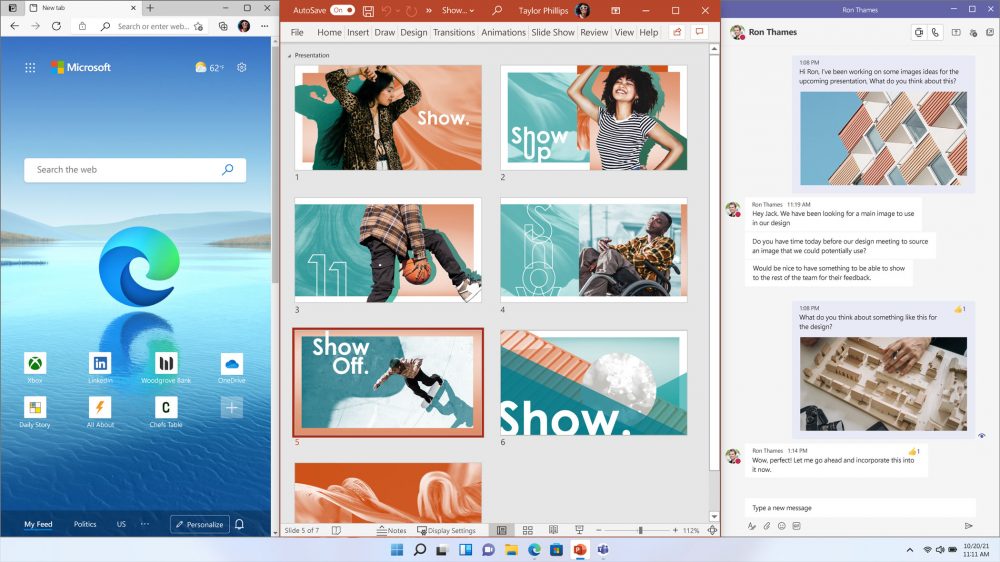 Microsoft has expanded on the Snap feature of Windows 10 that automatically positions two apps side by side with Snap Layouts and Snap Groups. These new features allow you to position multiple documents in the size and format that works best and save that layout. If it works as it did in the demo, it will be a huge timesaver for those of us who spend time each morning opening and laying out the same old apps.

Microsoft Teams will be integrated into the operating system, with Teams Chat conveniently appearing on the Taskbar by default.

The Widgets feature that premiered in the last Windows 10 update is a full-blown part of Windows 11, offering a personalized, AI-powered feed of items of interest such as news and weather. When opened, it slides across the screen like a sheet of glass.

One statement in Microsoft’s blog on the subject, however, was slightly alarming.

“For creators and publishers, Widgets also opens new real estate within Windows to deliver personalized content. Our aspiration is to create a vibrant pipeline for global brands and local creators alike, in a way that both consumers and creators can benefit.”

The Microsoft Store has been redesigned to be faster, easier to use and to include more types of content. And you’ll be able to directly install apps flagged on web pages with a Store download badge with a click; a pop-up version of Store will manage the process for you. Windows 10 users will also receive the new Store when it’s released.

One Windows 11-specific type of app will be able to download and run Android apps in Windows 11. Through a non-exclusive partnership with Amazon, its Android app catalogue will be available in the Windows 11 Store.

This, however, means that apps that rely on Google Play services won’t be there, nor will they run. Microsoft would not say whether Google Play or other app stores would join Amazon’s before launch.

Developers receive a lot of goodies to play with. The Store is being opened to all developers, with an improved revenue sharing model. Using the Microsoft Commerce platform, the split will be 85/15 for apps, and 88/12 for games, and if developers use their own or a third-party commerce platform, starting on July 28 they will not have to pay a fee to Microsoft.

An early preview of Windows 11 will be available to Windows Insiders on the dev channel on June 28. It will not be feature-complete, and will definitely not be ready for prime time, so install on a non-critical machine, not one used in production.

There’s a lot more coming, and some of the features may change before launch, but IT World Canada will keep you updated. Stay tuned.

Lynn Greiner
Lynn Greiner has been interpreting tech for businesses for over 20 years and has worked in the industry as well as writing about it, giving her a unique perspective into the issues companies face. She has both IT credentials and a business degree.
Previous articleCyber Security Today Week in Review for June 25, 2021
Next articleHashtag Trending, June 28, 2021 – Europe’s return-to-office lessons; Robocalls on the clock; Chinese fighter pilots VS AI