If you’re struggling as an organization to create successful enterprise apps, the last thing you probably want is a vendor to come up with a fancy name for your problems.

In fact, I’m surprised that no one at Mendix, which offers tools for developing mobile business software, thought to credit Geoffrey Moore when they came up with “The App Delivery Chasm,” a report based on survey results from less than 500 IT and business executives from around the world. For those that don’t remember, Moore was the author of “Crossing the Chasm: Marketing and Selling Disruptive Products to Mainstream Consumers.” He realized, rather astutely, that it’s far better to focus on the positive possibility of overcoming a challenge rather than focusing how bad the challenge is.

The Mendix report offers a series of dire warnings about how unprepared many enterprises are in creating mobile apps, how quickly they’re falling behind business demands and (most appallingly for the vendor, I imagine) how few have the proper development tools to handle the job.

“With demand growing rapidly, this App Delivery Chasm will only get worse unless companies can fundamentally transform their app delivery approach, drastically improving their speed and agility,” the report says. “Crossing the App Delivery Chasm should be every IT organization’s top priority.”

The proposed three-point solution in the report — have a strategy, get business people more involved and buy some good tools — could be applied to almost any IT challenge. That said, there are some interesting stats in here. For example, respondents said customer/partner-facing, reporting/data analytics and document/content management apps were in strongest demand, cited by 56 percent, 55 percent and 54 percent, respectively. It also showed a fairly even split among development methodologies, including 36.4 percent for waterfall, 36 percent for agile/scrum and 33 percent for eXtreme Programming.

I’d suggest that rather than giving into panic, CIOs use this data to make the business case they may need for more budget, staff or other resources to kick their enterprise app projects into high gear. Just tell the CEO that otherwise, you may risk falling into the chasm. 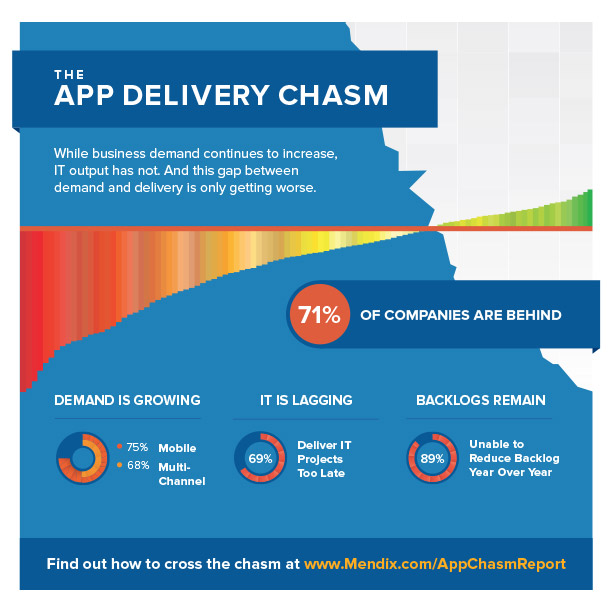 Shane Schickhttp://shaneschick.com
Your guide to the ongoing story of how technology is changing the world
Previous articleGolden night for ITWC at Canadian Online Publishing Awards
Next articleToronto, Ottawa police, SC Web sites shut down after attack