The 18% gap between Canadian and U.S. CIO attitudes about wearables says a lot

Happy Apple Watch Day! No one’s lining up outside Apple Stores, since they’re not selling them there, and could be a few more days until pre-orders of the devices actually arrive, but that isn’t stopping a slew of firms prepping apps and generally making the wearable revolution seem inevitable. Except, of course, to reluctant CIOs both here and in the U.S.

Recruiting firm Robert Half Technology, which has offices on both sides of the border, recently released research based on polls of IT leaders about their attitudes towards the Apple Watch and similar gear. Probably still smarting from the embarrassment of ignoring or dismissing the original iPhone until BYOD made it an enterprise mainstay, the prevailing beliefs around wearables is relatively high. On the other hand, Canadian CIOs are not quite as convinced about the power of smart watches as their American counterparts.

In the U.S., a strong majority of 81 percent believe wearables will become a workplace device, though only five percent said they see it happening over the next year. A good chunk (37 percent) see the shift happening within the next three to five years, while a quarter don’t see wearables in the workplace until 2020 or later.

Contrast this with the Canadian data. There’s still a majority of wearable believers, though not as strong at 63 percent. In terms of timeline, it’s also interesting that “Don’t Know” was the second-biggest response after the three-to-five period, at nearly a quarter of respondents.

It should be noted here that the sample sizes of these two polls are vastly different, with Robert Half getting 2,400 responses vs. only 270 in Canada. So take these numbers with a grain of salt. However the data could suggest that, once again, CIOs in Canada are taking a more cautious approach to what everyone else sees as an huge shift in IT.

Also, while several banks such as TD and Scotiabank have already rolled out customer-facing iOS Apple Watch apps, it could also be that Canadian CIOs have get to identify enterprise use cases that will make creating internal-facing apps.

An infographic of the Canadian results is below, an a link to the U.S. version of its Apple Watch CIO survey is here. 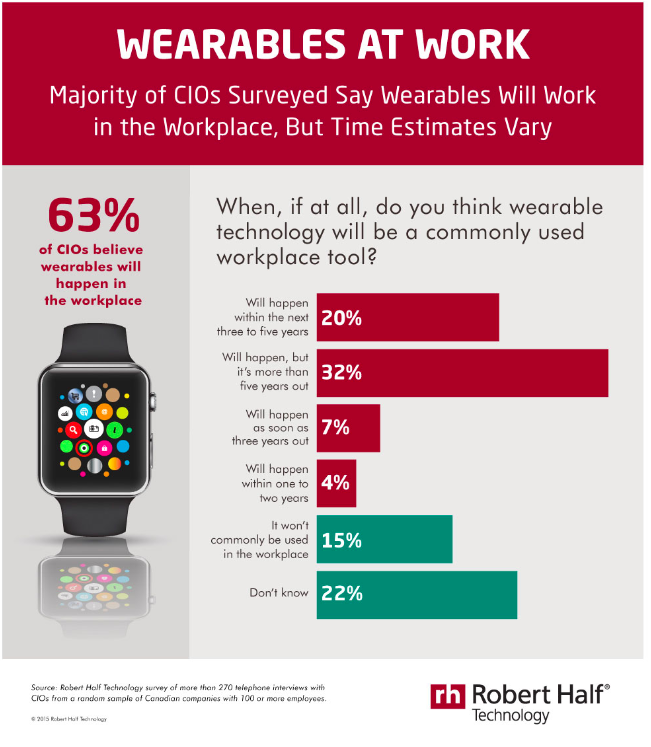