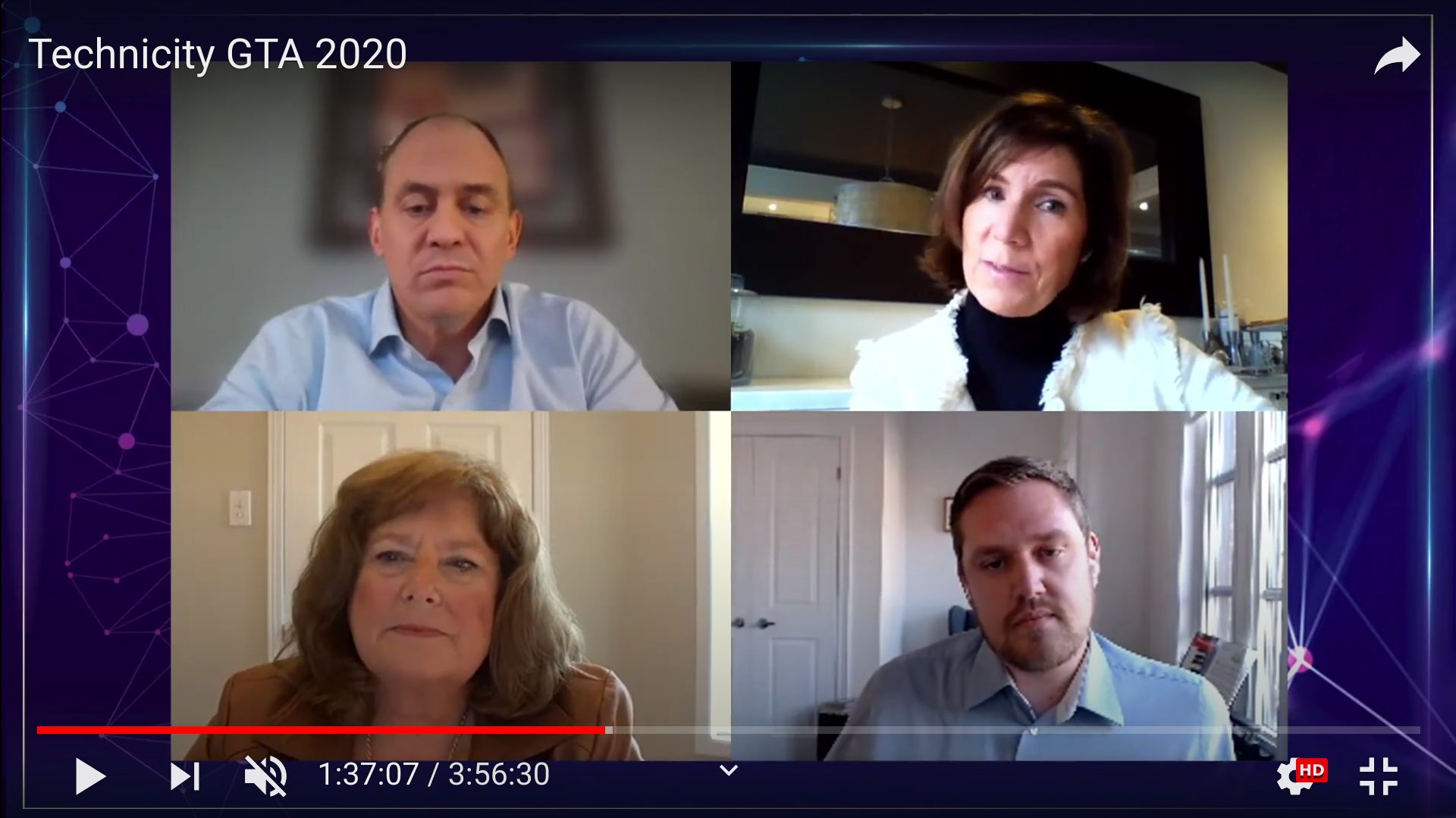 The rapid move to remote work driven by COVID-19 has impacted the way most organizations operate, including those of municipalities and their suppliers. At Technicity GTA this week, moderator Jordan Sheridan, general manager, modern workspace, Microsoft Canada sat down with panelists Karen Pugliese, country leader of networking infrastructure solutions vendor CommScope, Trinela Cane, commissioner, corporate services, City of Markham, and David Lynch, CEO and founder, Klir, which provides software to manage regulation and compliance in municipal water departments and water utilities, to discuss how it’s affected them and their organizations.

“It’s certainly been quite a change and I would say it happened on the turn of a dime,” Cane said. At the City of Markham, she noted, the workforce of 1000 is split 50/50 between those working on the frontlines and those in administrative positions, who have been working at home since the pandemic struck. Ironically, the city had already been planning to introduce remote work even before then, but hadn’t managed to make it work.

“Of course, COVID has forced us, like many organizations, to adapt quickly to that new environment and the changing parameters,” she said. “I think our focus has been on productivity, on ensuring that we’re continuing to deliver services to our customers, but also very importantly, on the health and wellness of our employees during this very tumultuous time.”

That rapid adaptation has come with challenges for her customers, Pugliese noted. “It was really twofold,” she said. “So one was, did they have the infrastructure to be able to do that – were they able to have folks move out of an office into their home environment and still be able to maintain their security, and all of the requirements around being able to access the documents that they were looking for and the systems that they needed in order to be productive in a safe and efficient manner. I think the second piece, which was maybe a little bit less to do with the organizations that the individuals worked for, the issue became one of stable internet access.”

She explained that in a lot of cases, with remote schooling on top of parents trying to work remotely, home internet speeds slowed to a crawl and people had difficulty working and studying.

Lynch said the municipalities overcoming challenges are looking at opportunities to change, not a brick wall.

“When I look at the best in class, the best ones are really looking at this as an opportunity. And seeing this is an opportunity is where these best-in-class municipalities and utilities are leading. So instead of replicating their day-to-day work with 6/7/8 hours of Zoom or whatever may be, in getting the fatigue that’s associated with it, they’re looking more for contextual collaboration tools,” he said. “I think that really is the future, what COVID has been the catalyst of.”

He said he prefers that municipal workers not adopt new technologies too quickly. “There needs to be thoughtful reflection on this technology and making sure that it works.”

Visit www.Technicity.ca for more information and to watch the sessions on-demand!

Cane agreed, noting that Markham already had a platform and infrastructure in place to support it during COVID. The city is implementing technology-based screening tools to promote safety for anyone visiting its facilities, and for staff working there. It also was able to participate in a pilot for IBM Watson for COVID, which provided information for customers without their having to phone in.

Sheridan then asked the panel what benefits and drawbacks they were seeing around the new hybrid workforce. On the plus side, Pugliese noted, people got their commute time back, and could use the technology they already had. But there’s debate on whether productivity has increased, or just the amount of time people spent in front of their screens.

“I’ve heard from customers who have customer-facing individuals that they have found it very, I’m going to use the word lonely, sitting at home on a regular basis, and interacting with a screen,” she said. “When we look at the increased amount of time spent in front of a screen and we look at the impact that that has, in combination with the lack of ability to engage with people outside of your household, that certainly has some negative connotations and certainly has resulted in, I would say, some wellness challenges for a lot of people.”

“We’ve seen of course that the commute time sitting in the car is reduced greatly. It was replaced by the longer work hours,” Sheridan observed. “The pendulum actually starts to come back now and you see us realizing the benefit of the commute. How do we create a digital commute now to create that demarcation point at the beginning of the end of the day to help people with that work life balance and hopefully help to restore some of that a little bit?”

Lynch stressed the importance of short breaks. “We’ve heard before from psychologists that you need these sorts of micro breaks. What interferes with this is constant notifications. So for me, the idea of a commute is negative, but it’s also 40 minutes where I don’t have kids asking me for another glass of water.”

The panel then turned its attention to policies around devices, and the separation of work information and personal information, and how they’ve changed since the start of the pandemic.

“We have a focus on cybersecurity during this tough time and I think we’ve really made an effort to help people use city devices, as opposed to their own personal computers,” Cane said. “Just for those exact reasons. We’ve had to rethink our own rules and policies that are really about protection of the public purse, but recognizing that people are putting in far more hours than you would have ever thought would be happening when they work day-to-day in the office with no separation of duties.”

Many of these issues are not new, Lynch pointed out. What he called a “mishmash” of tools presents a huge problem for IT departments, who can no longer decree that one system must be used; a system that takes budget and massive consulting time to implement. This isn’t going to work (and hasn’t worked). “So I think there needs to be this marrying of suiting the needs of your various departments in the municipality, from parks and rec to waste to health services to finance, as well as their own individual needs,” he said.

Sheridan asked how information governance has changed during COVID.

“I think governance is always a very interesting question,” Cane said. “We’re now focusing a lot more on data analytics and using what used to be our GIS team to really expand into sort of a data stewardship role and identifying what are the key metrics and the data sources that we’re going to be using. It’s a bit of a journey, I’d say and our digital strategy helps us frame some of it, but we still have a distance to go.”

What to do with all that data?

“I think that a lot of organizations have just been collecting data over the course of time because they have the ability to, and then eventually the question becomes, okay what are we going to do with it and what was the requirement for us to collect in the first place, and then, does that requirement still exist today?” Pugliese said.

Lynch remarked that in a way, the move towards data collection was driven in the same way his kids collected sticks when they’re on a hike – there are lots available, so they grabbed as many as possible because they could.

“I think when the technology was introduced first and we could get like things like telemetry data in real time, this was so exciting when we didn’t have it before. And unfortunately, although it was wonderful, now we’re dealing with the hangover of that, which is maintaining and storing this data, so I think two really, really good, well-made points: we have to be disciplined and go on maybe a bit of a data diet and not just constantly collect it.”

To wind up the session, Sheridan asked what factors panelists see that stifles their ability to innovate.

“One of the things that I’m seeing is there’s a certain what I would call flatness – it’s almost a sameness of living every day and working every day and the question is, how do we inspire people,” Cane said. “They’re really becoming so insular. How do you create energy and excitement and really be giving people not only permission, but the incentive to start to think outside the box?”

“The narrowness of focus is certainly one of them and certainly what we’ve tried to do in order to create that excitement or create that innovation is bringing people together from various parts of the organization to come up with, we’re calling them pivot plans, but I guess you could call them anything,” Pugliese said. She pointed out that the future of work, with some people choosing to go into their offices and others who don’t want to commute, will be very different. “We’ve got these great virtual tools that we haven’t quite figured out yet. How do we use those to actually create engagement? I think I’ll call it the secret sauce that’s missing, regardless of what our future work is going to look like, that is going to be a requirement.”

Lynn Greiner
Lynn Greiner has been interpreting tech for businesses for over 20 years and has worked in the industry as well as writing about it, giving her a unique perspective into the issues companies face. She has both IT credentials and a business degree.
Previous articleWebex gets a facelift with noise cancellation, transcriptions, but Cisco says more to come
Next articleCanadian IT professionals guarded about security success