Rapidly growing shift from basic feature phones to smart phones, combined with expanding mobile device use and machine-to-machine (M2M) applications will power a 10-fold increase in mobile data traffic in the next five years, according to a recent forecast by network gear company Cisco.

In 2014, 88 per cent of global mobile traffic was attributed to “smart traffic” from computing and multimedia capable devices running on a minimum of 3G connectivity. That figure is expected to shoot up to 97 per cent by 2019.

The Cisco Visual Networking Index (VNI) Mobile Forecasts projects that global mobile data traffic will reach an annual growth rate of 292 exabytes by 2019, up from 30 exabytes last year. One Exabyte is equal to one quintillion bytes or one billion gigabytes.

Cisco (NASDAQ: CSCO) also expects 3G connectivity to surpass 2G as the primary cellular technology. By 2019, 3G will be supporting 44 per cent of mobile devices and connections around the world. By this time 4G networks will account for 26 per cent of connections and represent 68 per cent of worldwide traffic.

Cisco also estimates that more than half of mobile traffic will be transferred from conventional cellular systems to Wi-Fi and small cell networks. To prevent network congestion, carriers will move 54 per cent of mobile data traffic to these new systems.

Related Articles
Subscriber retention behind Wi-Fi deployment
M2M will bring government regulation, predicts IT consultant
How Canadian organizations use the Internet of Things

There will be approximately 24.3 exabytes a month of global cellular traffic by 2019 compared to 29 exabytes a month on Wi-Fi for the same period. The number of minutes of voice over Wi-Fi will exceed that on LTE by 2018, said Thomas Burnett Jr., Cisco study lead, in an interview with the New York Times.

However, this move could cut into profits as carriers cannot charge customers for Wi-Fi the same way they do with cellular services.

Low-power, wide-area connection such as those from monitors used in hospitals and for tracking assets in a factory will grow, said Burnett. Today they account for one-tenth of one percent of all mobile connections.

By 2019, these connections will grow 80 fold to eight per cent of the 11.5 billion device connections to mobile networks.

This growth could also give rise to new business models and regulatory issues, said Burnett.

Voice-over-Wi-Fi (VoWi-Fi) is not new, but earlier solutions had limitations that affected adoption and end-user experiences. Carrier-grade VoWi-Fi offers are now being introduced, which can be delivered to non-SIM devices, such as Wi-Fi- only tablets. VoWi-Fi has the potential for significant growth over the next five years: 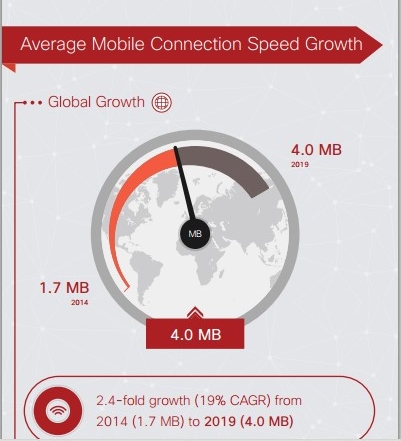 The impact of wearable devices: