For about an hour today, a major website outage knocked out major services in Canada and the U.S. including Amazon, Delta, UPS, Sony’s PlayStation Network, Royal Bank of Canada and Rogers.

Emergency officials from Intel Point Alerts confirmed a U.S. multi-state 911 outage, noting on their Twitter feed that the exact cause of the outage is being investigated. “Virginia is reporting the majority of outages, with at least 4 counties out,” they said.

Content delivery network Akamai’s Edge DNS service suffered a failure just after noon ET, according to Akamai’s status page, causing the outages. It now reports that the issue has been mitigated, although the service is still described as suffering from a partial outage.

This is Akamai’s second major failure in just over a month. In June, a misconfiguration in its Prolexic service took down Australian banks.

Other affected services reported by Intel Point Alerts today include:

Update: this afternoon, Akamai tweeted the following explanation for the outage: 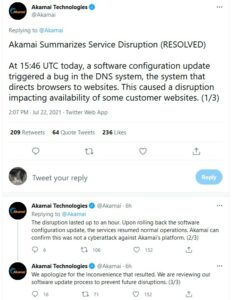 Pragya Sehgal
Born and raised in the capital city of India - Delhi - bounded by the river Yamuna on the west, Pragya has climbed the Himalayas, and survived medical professional stream in high school without becoming a patient or a doctor. Pragya now makes her home in Canada with her husband - a digital/online marketing fanatic who also loves to prepare delicious meals for her. When she isn’t working or writing around tech, she’s probably watching art films on Netflix, or wondering whether she should cut her hair short or not. Can be contacted at psehgal@itwc.ca or 647.695.3494.
Previous articleHashtag Trending July 22 – Macron Targeted by Pegasus; Venmo removes a controversial feature; DuckDuckGo introduces email protection
Next articleLG to use 100% renewable energy by 2050