The 10th gen Galaxy series sees further segmentation. The Galaxy S-series sits in the premium performance tier and has been traditionally occupied by two products differentiated by their display size. With the Galaxy S10s, Samsung is slicing the segment into four products. Ordered from the cheapest to the most expensive, they’re the Galaxy S10e, Galaxy S10, Galaxy S10+, and the elusive Galaxy S10 5G.

Samsung skipped the notch and jumped straight to an all-screen display. The top and sides have almost no bezel, and the base only has a narrow chin. As per traditional Galaxy design, the glass slightly curves at the edge. 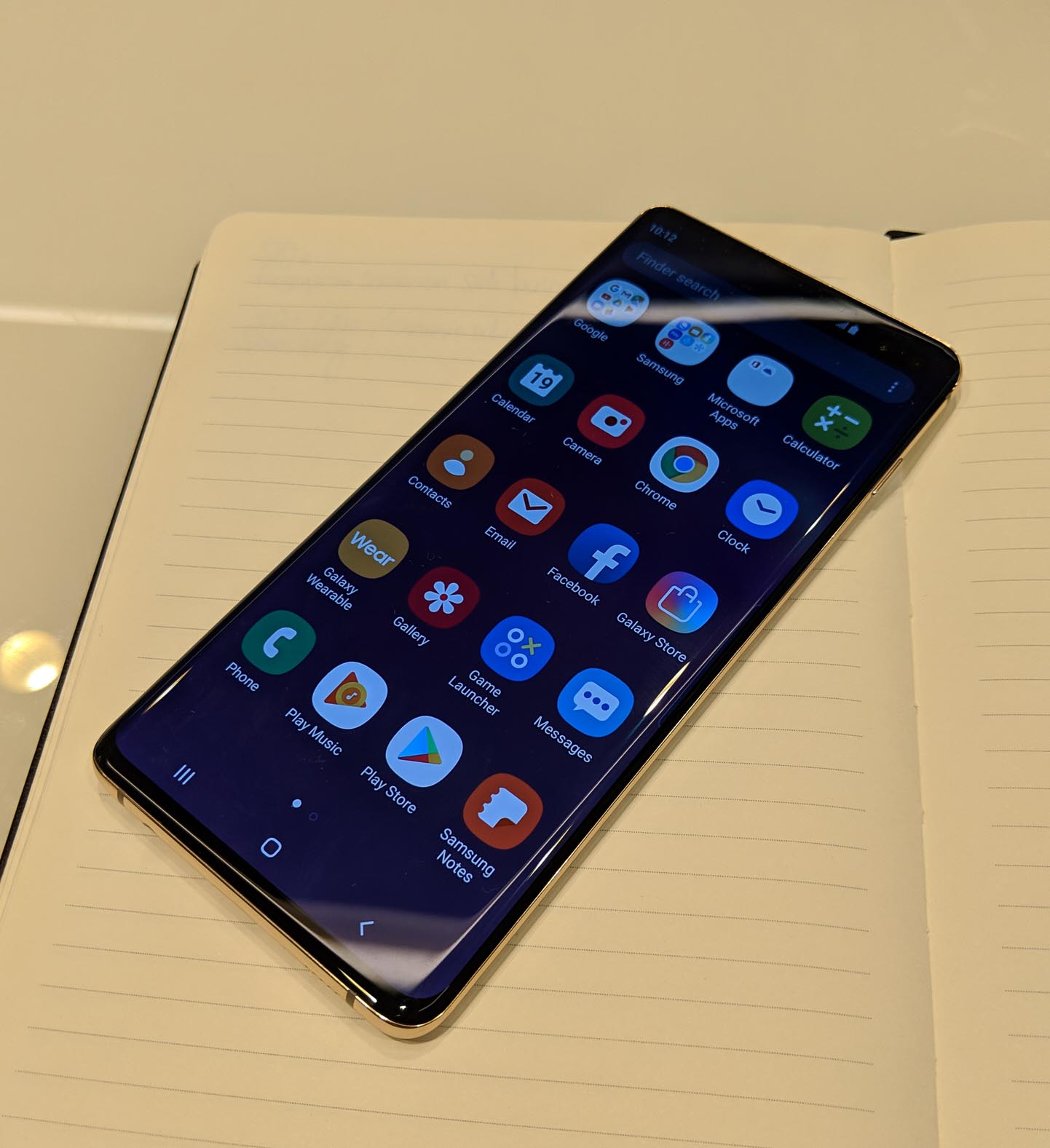 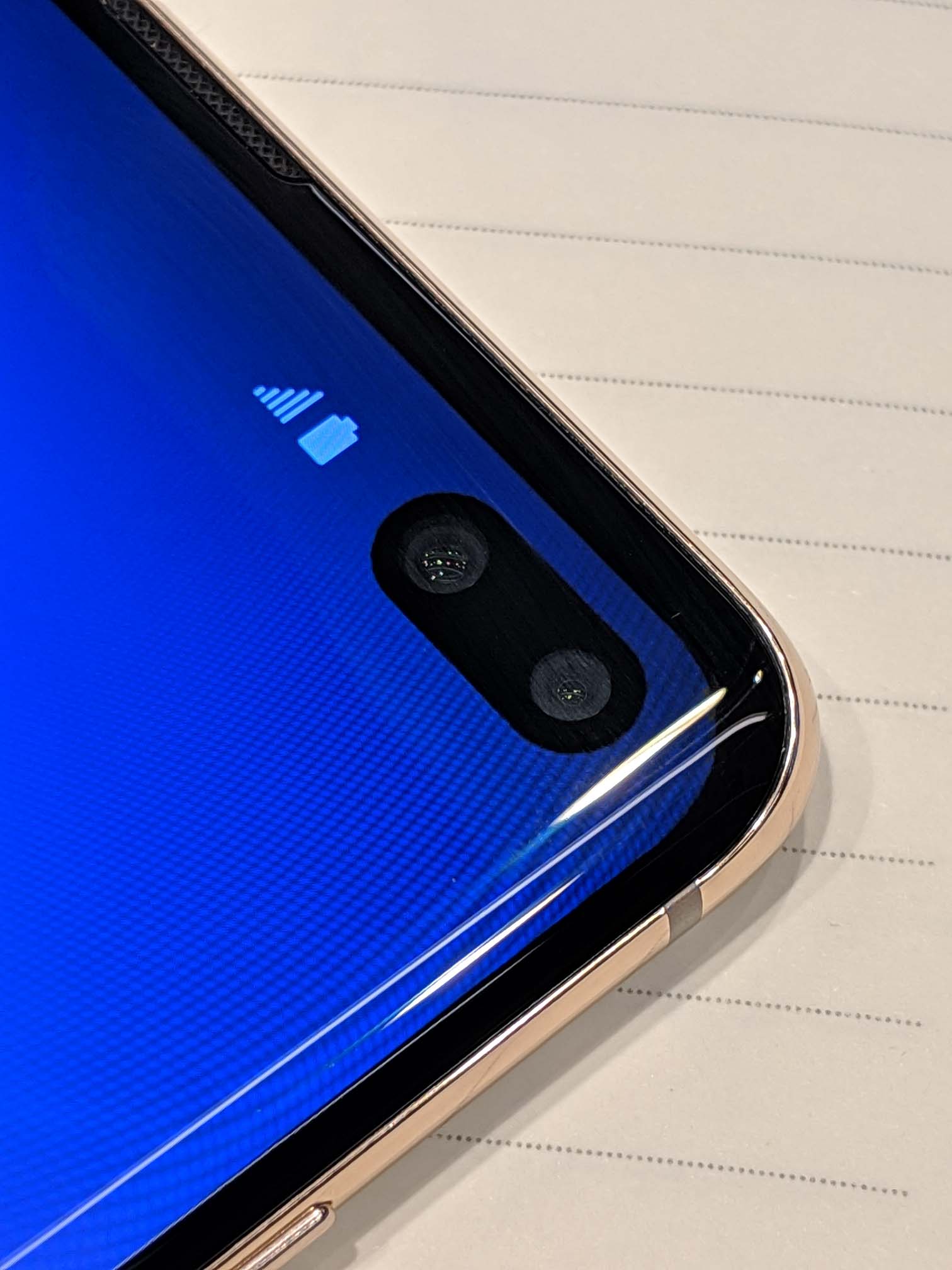 Samsung’s displays have always been excellent and the new Galaxy S10s are no exception. It has vivid colors and can be very bright. Samsung also claims that its new display reduces blue light by 40 per cent without sacrificing color accuracy or using night mode. When placed next to my Google Pixel 3 XL, the Galaxy S10’s color temperature in white scenes definitely feels warmer. I’ll reserve further opinion after more testing in the full review.

All the latest Galaxy S10 phones feature system on chips (SoC) built on 7nm transistors. While the names of the SoC have yet to be disclosed, they’re likely the Qualcomm Snapdragon 855 for the North American versions and the Samsung Exynos 9820 for other countries. With the Galaxy S10s, Samsung pushes the maximum RAM capacity to 12GB and storage to 1TB. Their new flash storage uses the UFS 3.0 protocol, which lends it a maximum theoretical transfer speed of 2.9GB.

The Bixby button is still there, unfortunately. The upside is that Samsung is allowing some modification of the button’s function. Users can choose for an app to be launched when the button is either single pressed or double pressed. Bixby remains in place for the other option not inhabited by the app launch. 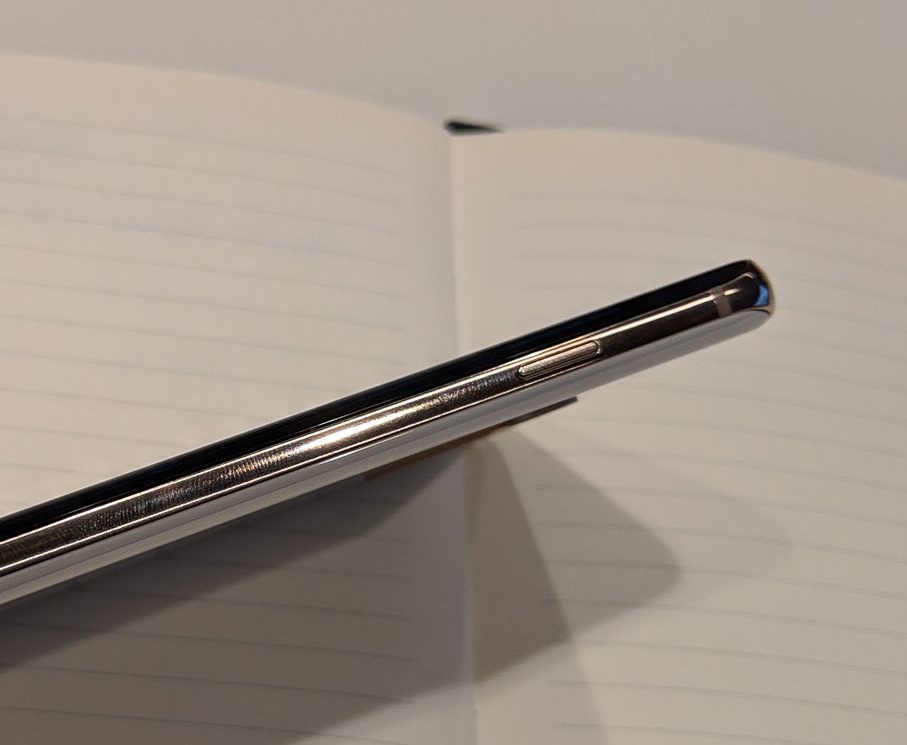 Guess what else came back? The headphone jack. Thank you, Samsung. 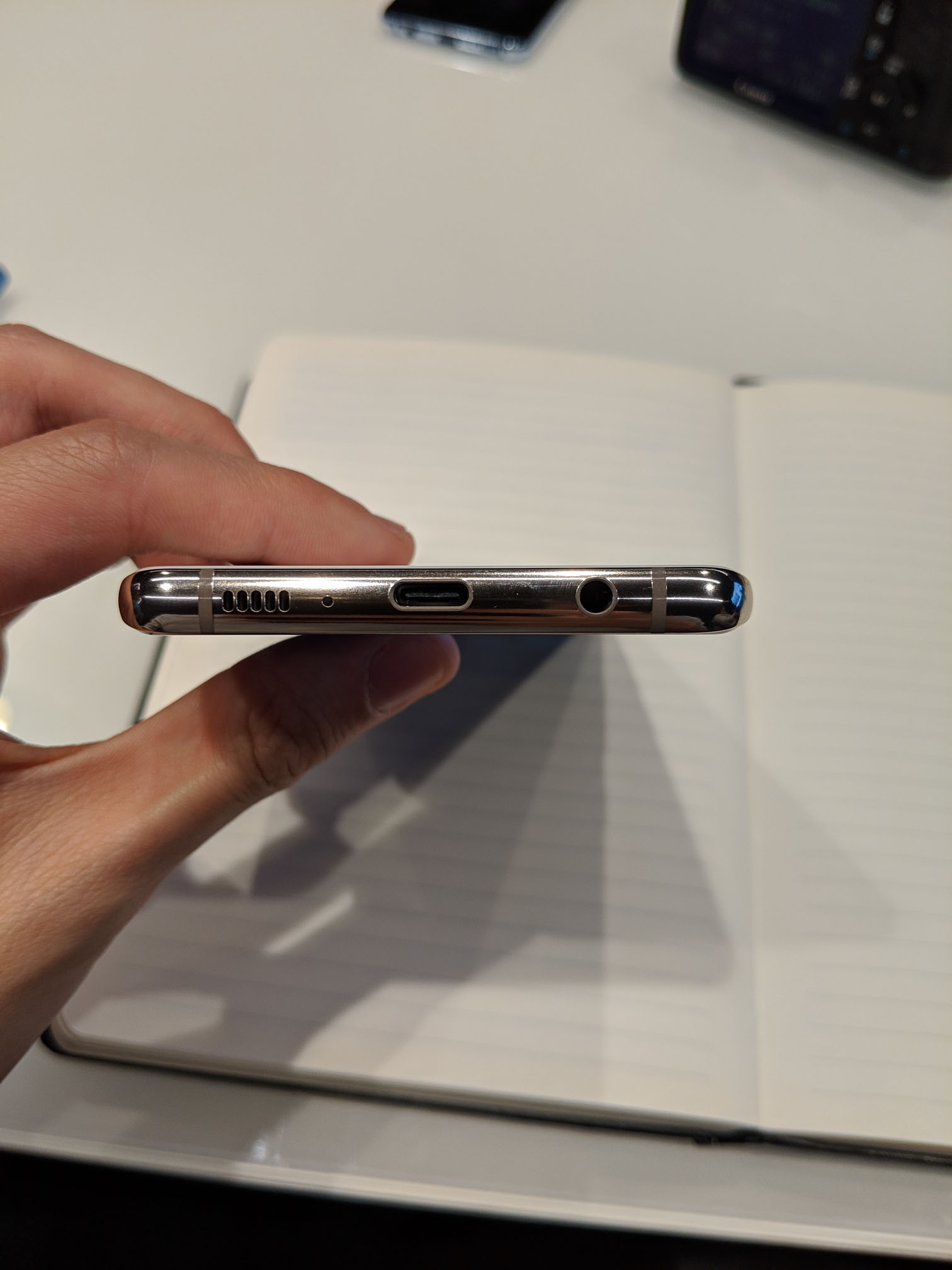 All three phones feature a mono speaker at the bottom.

Despite having the same 5.8” display as the Galaxy S9, the Infinity-O display lends it a smaller overall footprint, making it very easy to hold. 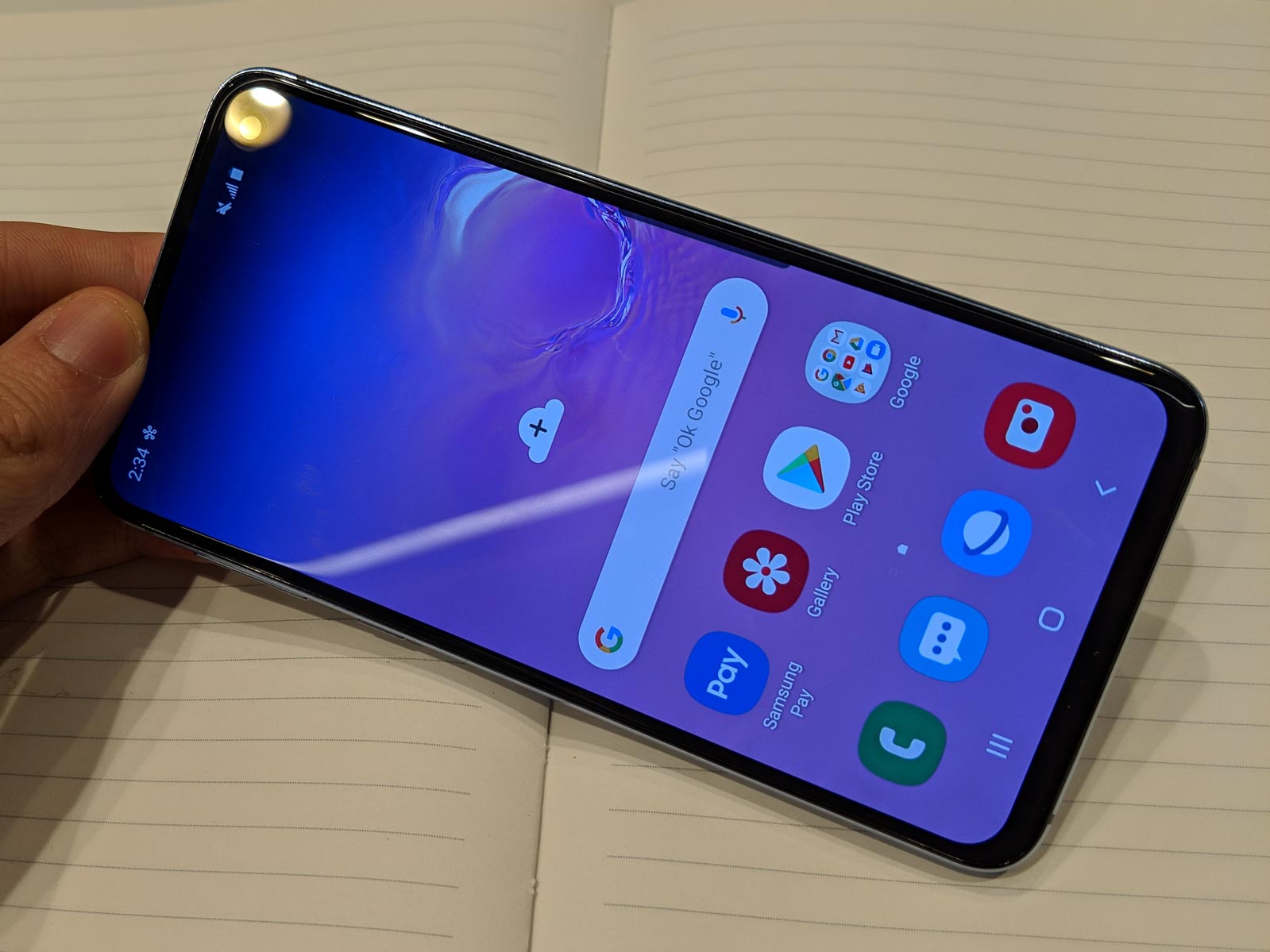 Furthermore, it feels much lighter relative to the other two Galaxy S10s. The fingerprint sensor has migrated onto the power button, away from the horizontal rear camera array, which holds a 12MP wide angle lens and a 16MP telephoto lens. 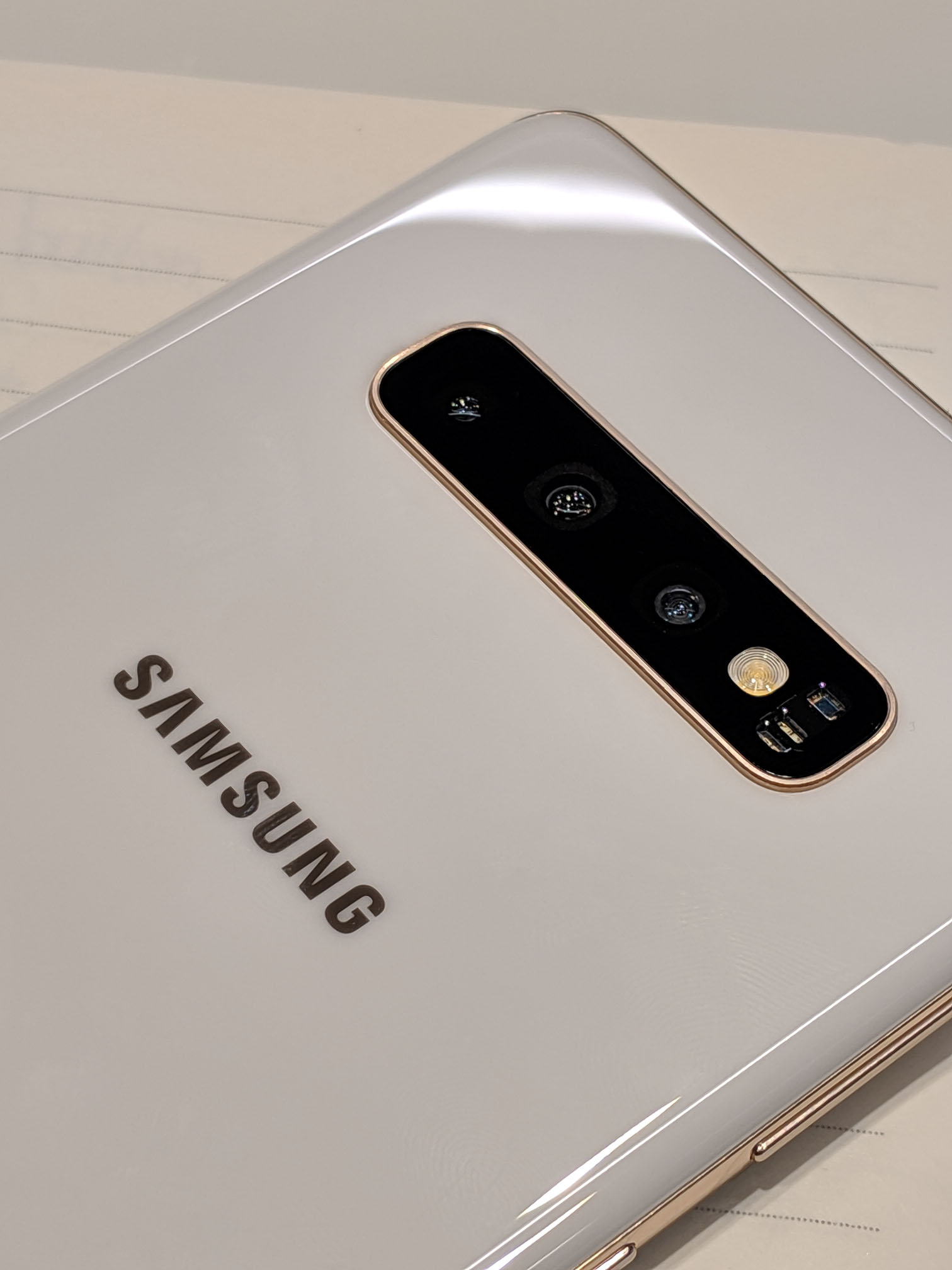 In addition, a new neural engine now assists the camera app for scene recognition and provide composition tips. A new night mode has been added as well, which boosts exposure and colors in low light by stacking multiple photos on top of one another. In principle, it sounds similar to the Night Scene in Google Pixel. This function is activated automatically based on lighting and can’t be controlled by the user. 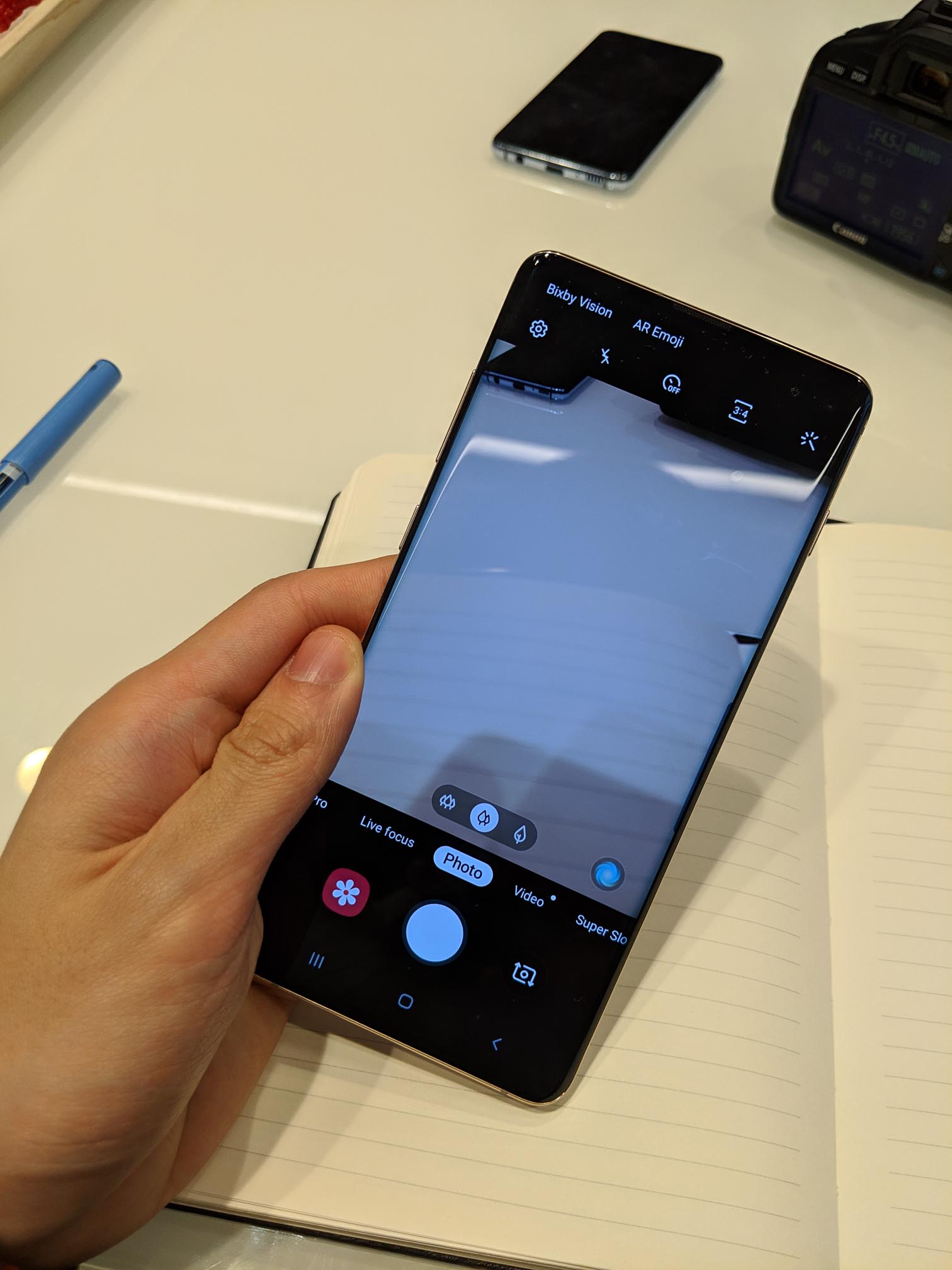 This year, Samsung has moved the fingerprint sensor right into the display, finally eliminating accidental rear camera smudges. The fingerprint sensor uses ultrasonic technology to produce a more accurate map of your fingerprints’ cliffs and valleys. It feels extremely fast, but not significantly faster than the solutions already available on the market. While speed is crucial, security matters, too, and Samsung says that its ultrasonic sensor much harder to spoof. 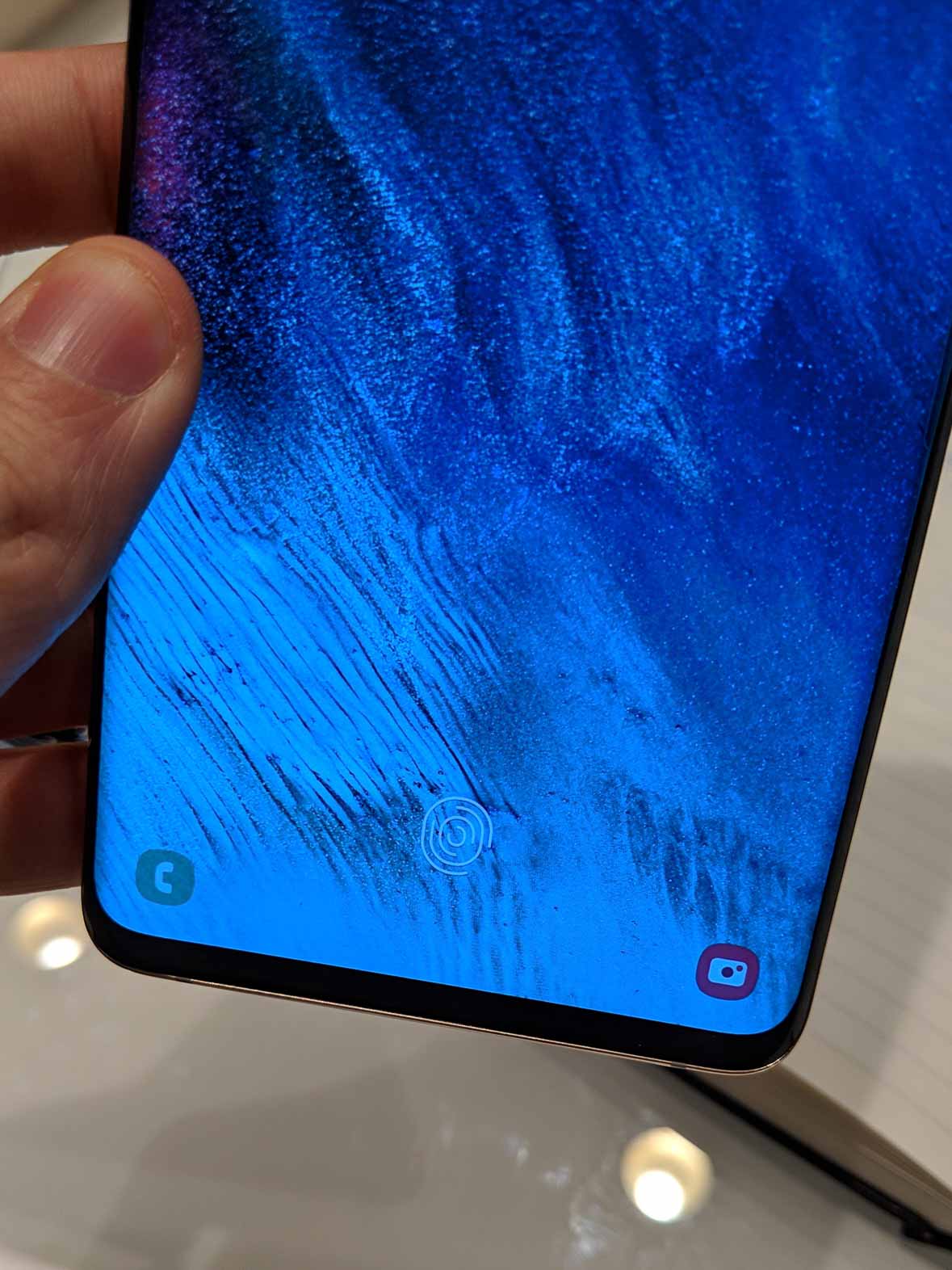 Also new is the reverse wireless charging feature called PowerShare. When enabled through the system tray, the Galaxy S10s can channel power to other devices that support wireless charging, including the new Galaxy Buds wireless earphones, the Galaxy Active smartwatch, and Galaxy Fit fitness tracker. The user simply has to place the device on the back of the phone. This isn’t my first run-in with reverse wireless charging; we saw a similar feature back when we reviewed the Huawei Mate 20 Pro. And while it delivers a “wow” factor, it’s a feature that would likely stay off most of the time. 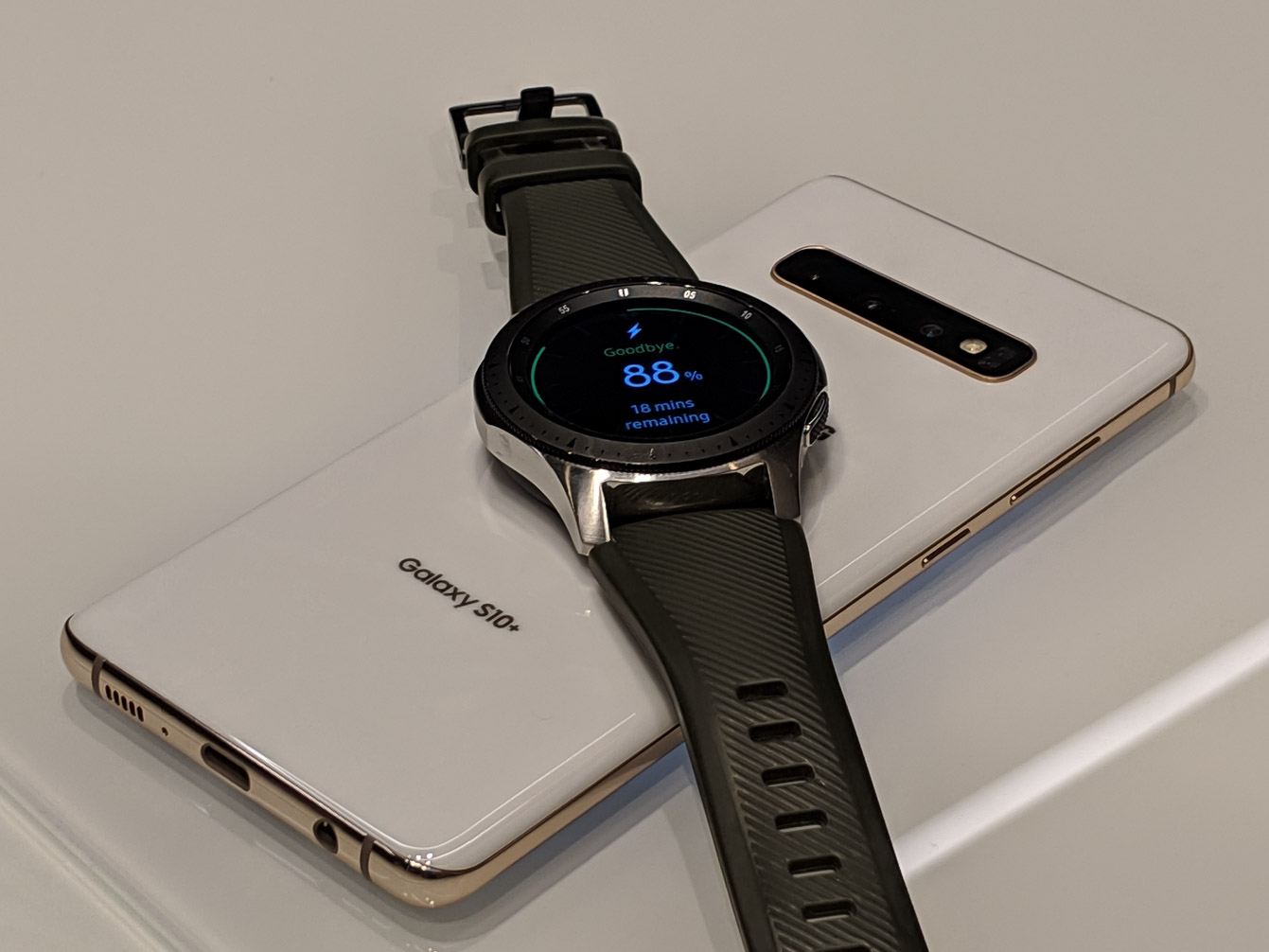 The Galaxy S10 sports a 6.1” display while the Galaxy S10 has a towering 6.4” display. But because of their new edge-to-edge Infinity-O display, they aren’t much larger than the Galaxy S9s. Display resolution hasn’t been announced yet, but system settings on the demo unit show the Galaxy S10+’s to be 3,040 x 1440p. 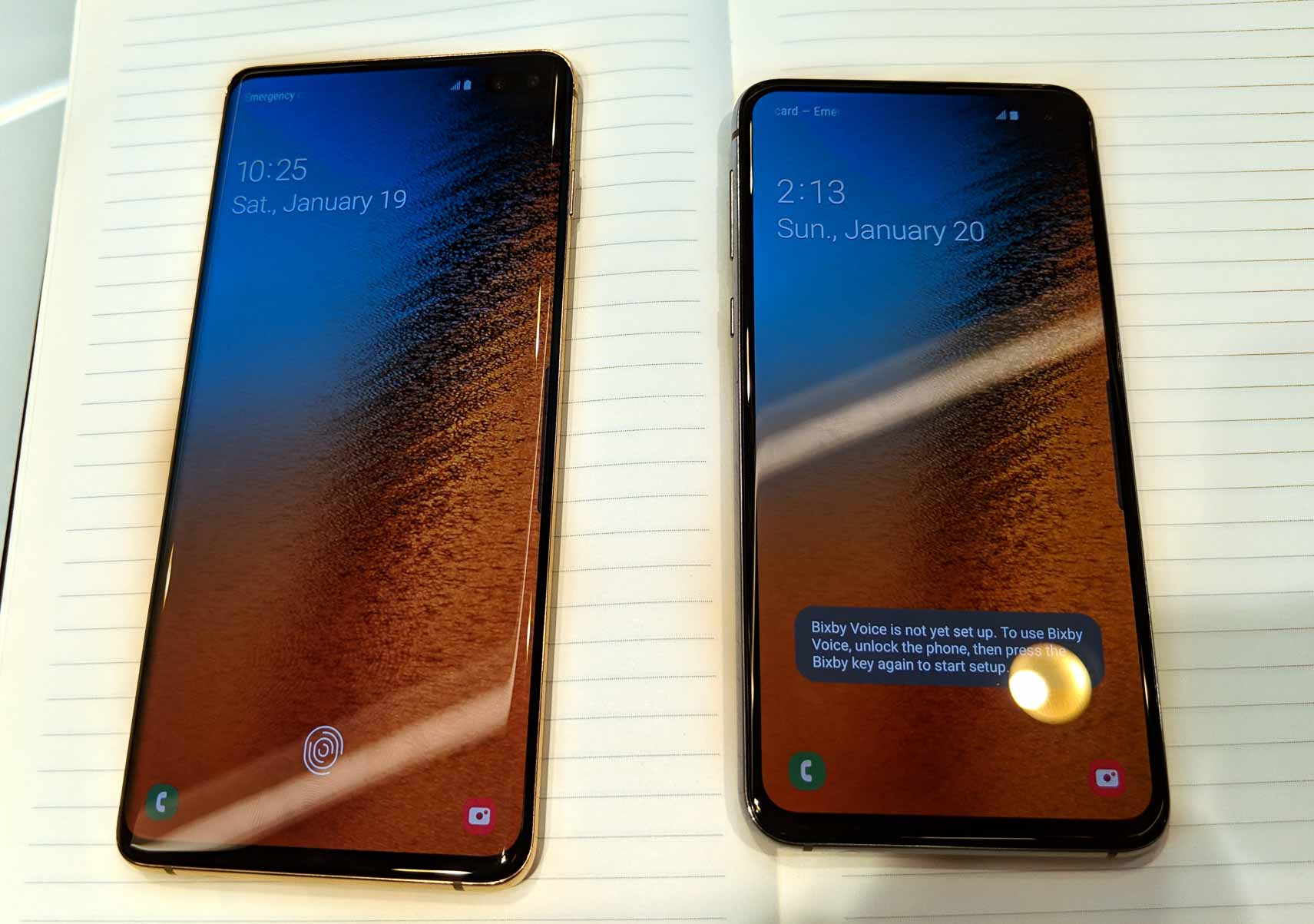 In addition to a 5G modem, the Galaxy 10 5G will also include a colossal 6.7” display, an extra depth sensor on the rear for AR, and a massive 4,500mAh battery. The 5G radio can automatically switch off when outside of a 5G zone and fall back to 4G-LTE. It will be available starting in June for an undisclosed price in international markets. It’s not coming to Canada, though, as 5G networks won’t roll out until at least 2020.

All Galaxy S10s excluding the Galaxy S10 5G is available for pre-order from Samsung’s website and will ship on March 8.