Location-based mobile services are supposed to be a boon for smart phone users (and for carriers who get some data revenue): Just open a map and query for what you want.

However, the Royal Bank has updated its mobile banking app to make it easier to find the nearest RBC automated teller machine or bank branch. It uses so-called augmented reality to create a live streetscape with icons showing the distance to the nearest ATM or branch. 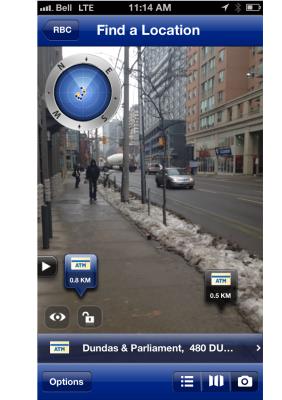 “Making continuous improvements to our mobile app to allow our customers a smooth user experience is a priority for us,” Jeremy Bornstein, head of RBC’s emerging payments division, said in a statement. The Branch/ATM Locators is one of the most used tools in the existing mobile app, he said. Combining a live view of a street with location-based services RBC has been able to develop a tool that is really useful in the day to day lives of our customers, he said.
Users need the most recent version of the app, open the Find a Location function and hit an icon that turns on the smart phone’s camera. The app links the live image, the device’s compass and its location-based service and a database of RBC locations. The nearest ATM or branch is indicated onscreen based on the direction the phone is pointed.
“If you were standing on a street corner before, you’d have a map (on screen) but wouldn’t necessarily know where you are,” Sarah Rogers, RBC’s senior manager of mobile strategy, said in an interview. Now a user can point their  mobile device down a street and the app indicates the nearest ATM or branch. If it’s not close enough, the user turns to point the screen to a different street.
The RBC mobile app, which lets users check balances, pay bills, transfer money and send money to Facebook friends, has been downloaded 2 million times since its release. Android versions come with a digital wallet.
The upgraded app is the latest way Canadian financial institutions are leveraging mobile computing to fight for customers. Earlier this month, for example, CIBC launched a mobile payments app for Telus wireless subscribers allowing them to pay for goods like coffee and groceries at participating retailers. It was initially launched on Android devices with Near Field Communications capability, with an app BlackBerrys promised by the end of the month. NFC allows users to wave their handset at an receiver that changes payments to the device’s wireless account.
Eligible devices are the Samsung Galaxy S4, SIII, Note II, HTC One, BlackBerry Z10, Q10 and Bold 9900.
In December Surviscor Inc., a research company that ranks online retail services, listed National Bank’s mobile app tops in the country for 2103, followed by CIBC (with the best tablet based mobile service), RBC (best iPhone and Android phone based mobile service) and Scotiabank (best BlackBerry-based mobile service).

Howard Solomon
Currently a freelance writer, I'm the former editor of ITWorldCanada.com and Computing Canada. An IT journalist since 1997, I've written for several of ITWC's sister publications including ITBusiness.ca and Computer Dealer News. Before that I was a staff reporter at the Calgary Herald and the Brampton (Ont.) Daily Times. I can be reached at hsolomon [@] soloreporter.com
Previous articleOttawa nets $5.27 billion in spectrum auction
Next article#FollowFriday – People who watch spectrum auctions, big data, and data breaches