It isn’t easy being an application developer, having to deal with multiple languages for creating apps to run on multiple operating systems.

Embarcadero Technologies is trying to bring some order into this chaos with the release of RAD Studio XE7, a software environment for Delphi/Object Pascal and C++ developers for building new or upgrading legacy apps.

This latest version has three new capabilities, according to John Thomas, director of product management: Help for enterprises that want to extend apps to mobile devices; a new device designer that helps developers share code for multiple platforms and support for Bluetooth for those creating apps for wearables. 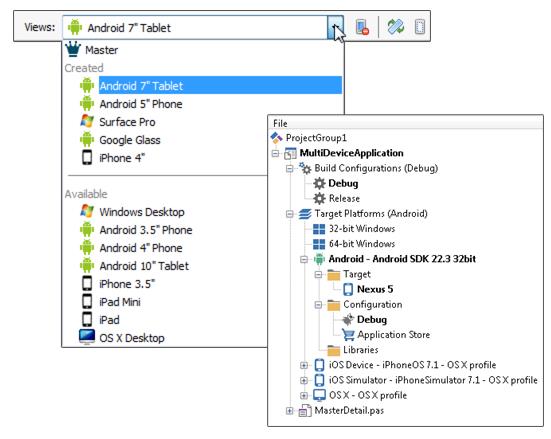 The new enterprise mobility services includes a turnkey middleware server so a developer can build an app and deploy it in the enterprise, he said.

The server hosts loadable custom API and data access modules. Based on open and standard technologies, including REST HTTP calls and JSON data formats, it and provides major SQL database drivers along with a built-in encrypted, embedded, and server-side SQL data store. It allows user management and authentication, plus user and API analytics, enabling secure access from mobile and desktop apps to

The new FireUI creates an interface that can work across multiple OS platforms and screen sizes. It includes a form designer, where a developer can lay out and design the app; multi-view components that know how to lay themselves out correctly depending on the form factor; and behavior services, a new API that gives the framework information about the device it will run on.

Code can be re-used from the master form.

“The real benefit here is developers can have one form,” Thomas said, instead of designing a completely separate user interface for each device and replicating code across forms. “Now they get to manage all the code in one place, yet get to optimize for a specific form factor.”

Howard Solomon
Currently a freelance writer, I'm the former editor of ITWorldCanada.com and Computing Canada. An IT journalist since 1997, I've written for several of ITWC's sister publications including ITBusiness.ca and Computer Dealer News. Before that I was a staff reporter at the Calgary Herald and the Brampton (Ont.) Daily Times. I can be reached at hsolomon [@] soloreporter.com
Previous articleWhat CIOs should say about the celebrity iCloud security leak
Next articleTelus gets Canadian rights to mobile prescription app