One country with two languages, but one concerted effort for ‘voice first’

Ask that question to your Alexa and it won’t even say “no.” But that hasn’t dissuaded the interest of Guillaume Dufour (on Twitter as @DufourGui), the founder and spokesperson for Alexa Quebec (on Twitter as @AlexaQuebec). Alexa’s lack of support for both official languages in Canada creates issues for application developers, but that doesn’t mean all fracophones are ignoring it.

Dufour gives a bit of background about Alexa Quebec, including when was the initial formation, the prime reason and objectives and plans.

“Alexa Quebec is a small meetup group active since March 2017. We discuss everything Alexa related, but with emphasis on Skill development. Topics of discussion range from an Introduction to Alexa, an Alexa Bootcamp, voice UX design, and voice applications in the medical field.  We aimed to be at the forefront before the wave comes,” Dufour said.

“Alexa isn’t quite as popular in Quebec yet.  The first reason is that it’s not available in French,” Dufour says. “Even though there is currently development for the French language for France, the French accent in Quebec is somewhat different, as well as expressions.

“In regard to other assistants, the only one that is currently available for French Canadians is Google Home since June 26 and information about its market penetration is scarce,” he added.

The big question on my mind was Alexa not currently providing French Canadian language support. Understanding that attitude plays a major role in market development and technology adoption, especially where culture or language is a factor or posing barriers, I asked Dufour about the overall attitude towards Alexa among francophone, specifically wondering if it just not on their radar, or are they eagerly awaiting French language support? 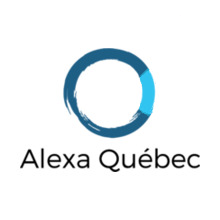 “In the past 12 months, I’ve been involved with the voice first community in Quebec, but it was like preaching in the desert. People are far more interested in blockchain and crypto-currencies than anything else,” Dufour says. “That being said, I still feel that the voice revolution will come for French Canadians too… just a bit later.”

Dufour says that Quebec’s language laws don’t affect voice user interfaces much. “It’s mostly packaging than anything else. For example, it’s totally impossible to buy Heihei (The world’s most stupid chicken from Disney’s cartoon Moana) from Toys R Us here in Quebec, because the packaging is English only.”
Dufour’s own boutique development firm, Dafamo Software, has three employees. But they don’t spend much time building voice first applications. Though Dufour does have a few Skills in development himself.

We discussed recent developments in the Quebec marketplace. Dufour explained, “While going to a large web conference Quebec City last week, I had a big clue about Alexa coming to Canada in French, or at the very least an announcement of it in the current year. The source seems very credible since they are already working with Amazon on Skills for English Canada.  That totally makes sense since Alexa has been announced in France. So at this point, they just need to train her for our particular accent, grammar, and phrase differences. Also, people in the two voice first sessions were quite enthusiastic about everything they were seeing. It didn’t feel that way last year as voice first was almost considered for initiates only, but not anymore.”

Dufour is actively presenting at French conferences, focusing on his “Introduction to Intelligent Speakers” session