No privatization of BlackBerry, Heins out in Fairfax deal 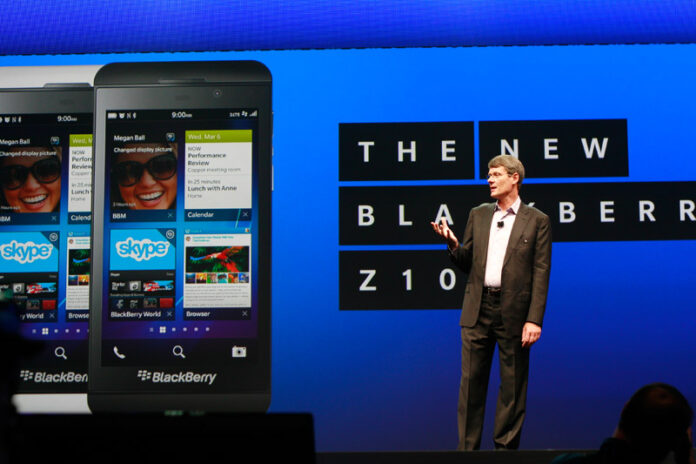 Fairfax Financial has failed to find investors to partner with and take BlackBerry private.

Instead the Toronto investment company said Monday it has signed a deal that it and other investors will put $1 billion into the struggling handset maker by selling convertible debentures. Fairfax, BlackBerry’s largest shareholder, will put up $250 million of that in a deal that it wants to finalize in the next two weeks.

Combined with the $2.6 billion in cash BlackBerry has on hand, that would give it $3.6 billion that could be stretched several years — particularly as it chops staff and what it considers non-essential projects.

However, the deal comes with a price: CEO Thorsten Heins will leave the company in two weeks when the deal is completed and be replaced by former Sybase Inc. chairman and CEO John Chen. After a new CEO is hired, Chen will become the company’s executive chairman, replacing current chair Barbara  Stymiest. She will remain on the board.

The announcement means not only could Fairfax not find investors to back a privatization of BlackBerry, no other group of investors could be found either. BlackBerry founders Mike Lazaridis and Douglas Fregin had also been trying to put together a consortium that would meet with the BlackBerry board’s approval.

On the Toronto Stock Exchange BlackBerry stock dropped 13.8 per cent on the news to $6.97 within the first half hour of the start of trading. It stayed there at noon.

Fairfax chair and CEO Prem Watsa will re-join the BlackBerry board to become lead director and chair of the compensation, nomination and governance committee. Watsa resigned from the board so he could mount his attempt to take the company private.

Fairfax had been seeking partners in a group that would offer $9 a share to stockholders — at total of $4.7 billion — to take BlackBerry private and sort out its problems.

BlackBerry’s future is now uncertain: Can the company use the $1 billion to keep its parts intact and turn itself around, is it to be used to buy time for another buyer(s) to make an offer to take it private or will it be used to stabilize the company while parts are sold off?

The Toronto Star quoted Watsa telling Bloomberg News that there is no plan to break up BlackBerry.

Separately, Bloomberg columnist Matt Levine today wrote a piece that wonders if Fairfax was being cunning when it offered to try and find a group that would bid $9 a share. He suspects today’s $1 billion deal would have been rejected back then; now Fairfax has a better deal.

BlackBerry has already started to face the fact that its new Z- and Q-series handsets running on the next-generation BlackBerry 10 operating system won’t quickly improve the company’s finances so it is laying off 4,500 staff.

The news disappointed National Bank Financial analyst Kris Thompson. In a note to investors this morning he noted that a number of potential bidders “have been inside the tent” looking at the books behind closed doors. “Nobody liked what they saw. Why should we?” he asked.

Chen took over relational database maker Sybase Inc. in 1998 at a time when that company was facing headwinds and turned it into a datawarehousing and mobility management specialist.  It was bought by SAP in 2010. Since then he has been sitting on a number of boards including The Walt Disney Company and Wells Fargo & Co.

“I am pleased to join a company with as much potential as BlackBerry,” Chen said in a statement. “BlackBerry is an iconic brand with enormous potential – but it’s going to take time, discipline and tough decisions to reclaim our success. I look forward to leading BlackBerry in its turnaround and business model transformation for the benefit of all of its constituencies, including its customers, shareholders and employees.”

“Today’s announcement represents a significant vote of confidence in BlackBerry and its future by this group of preeminent, long-term investors,” BlackBerry board chair Barbara Stymiest said in a statement.

“The BlackBerry Board conducted a thorough review of strategic alternatives and pursued the course of action that it concluded is in the best interests of BlackBerry and its constituents, including its shareholders. This financing provides an immediate cash injection on terms favorable to BlackBerry, enhancing our substantial cash position. Some of the most important customers in the world rely on BlackBerry and we are implementing the changes necessary to strengthen the company and ensure we remain a strong and innovative partner for their needs.”

“I am also pleased that John Chen, a distinguished and proven leader in the technology industry, has agreed to serve as BlackBerry’s executive chairman. I look forward to continuing to serve BlackBerry as a member of its Board of Directors and chair of the Board’s Audit and Risk Management Committee. On behalf of the Board, I would also like to thank Thorsten for his service to BlackBerry over the past six years. Under his leadership, BlackBerry established a more efficient cost structure, developed new products, saw the adoption of BES 10 and delivered the BlackBerry 10 platform. These are all significant accomplishments. We are grateful for his contributions and wish him well in his future endeavors.”

“Fairfax is a long-time supporter, investor and partner to BlackBerry and, with this investment, reinforces its deep commitment to the future success of this company,” said Prem Watsa, Chairman and CEO of Fairfax. “I look forward to rejoining the BlackBerry Board and to working with the other directors and management team, under John Chen’s leadership, to shape the next stage of BlackBerry’s strategy and growth.”

Howard Solomon
Currently a freelance writer, I'm the former editor of ITWorldCanada.com and Computing Canada. An IT journalist since 1997, I've written for several of ITWC's sister publications including ITBusiness.ca and Computer Dealer News. Before that I was a staff reporter at the Calgary Herald and the Brampton (Ont.) Daily Times. I can be reached at hsolomon [@] soloreporter.com
Previous articleApp for iPad aimed at organizing projects
Next articleBig data & analytics: You don’t want one without the other