Microsoft Corp. has finally moved to consolidate its two overlapping communication platforms, Lync and Skype. The company said that by the first half of next year it will retire the Lync brand and replace it with Skype for Business.

Ever since Microsoft bought the consumer-focused voice over Internet protocol (VoIP) company Skype for US$8.56 billion in cash in 2011, people have been wondering whether and when Redmond will combine it with its corporate equivalent, Microsoft Lync 2010 (formerly known as Office Communication Server). Back in 2013, Microsoft linked the two platforms enabling Skype to communicate with Lync. Earlier this year, the two platforms were allowed to exchange video calls.

Microsoft (NASDAQ: MSFT) has been moving towards merging the workplace functionality and security of Lync with the ease of use found in Skype and that further blurring of the lines between home and workplace is set to occur next year. Current Lync Server customers can update their Lync Server 2013 to the new Skype for Business without the need of any hardware, and transitioning to the new platform will be easier for Office 365 customers, according to Microsoft.

“In the first half of 2015, the next version of Lync will become Skype for Business with a new client experience, new server release, and updates to the service in Office 365,” said Gurdeep Singh Pall, corporate vice-president of Office Lync and Speech Group at Microsoft, wrote in a blog on Tuesday. “We believe that Skype for Business will again transform the way people communicate by giving organizations reach to hundreds of millions of Skype users outside the walls of their business.”

No less than 300 million people around the world use Skype to communicate with friends and family via online video link and Microsoft is determined to take advantage of this familiarity to increase adoption of its business communication platform.

For example, screenshots (checkout the above image) that accompanied Pall’s post indicate that Microsoft is adopting the familiar Skype’s icons for calling, ending a call and adding a video.

The company is also incorporating Skype’s call monitor to the new Skype for Business so that users can keep an active call visible in a small window on the side of their screen when they are working on some other task. 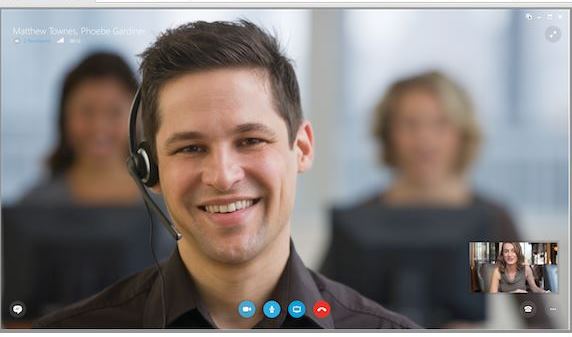 The new platform will feature Lync’s content sharing and telephony capabilities. Prior to the announcement, Lync already offered instant messaging and audio calling with Skype users, now Skype for Business will include video calling and allow users to call any Skype user on any device.

Microsoft will be announcing more Skype for Business developments in the near future, said Pall.