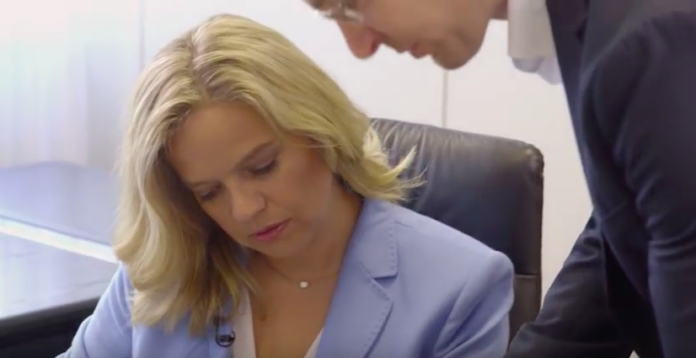 For some time now, I’ve been a bit skeptical of vendors who try to turn their CIOs into “authentic” spokesperson for their brands, but SAP’s latest online video takes the cake.

After a cheery “Guten mortgen!” from SAP CIO and Chief Process Officer, Helen Arnold, we get to see her from the moment she wheels in her suitcase(?!) into the office to the various trips she makes around the business software maker’s glass-filled facility.

What’s glaringly obvious, though, is that this video is less about giving insight into IT leadership at SAP than showing off technology at SAP. Take, for example, the way Arnold checks her IT infrastructure for availability.

“I have immediate access to all relevant statistics, systems and issues, all right here on my uptime app,” she enthuses. “It’s all streamlined and rock-solid.”

Then, suddenly, drama! SAP is being potentially attacked! But that’s no problem, because of SAP’s threat detection application. Whew! Good thing this didn’t take up more than a few seconds of the clip! (Arnold’s role in this process, by the way, was to look at a tablet and nod, “That’s good,” before sending an underling on his way.)

Later, Arnold makes her way to a team meeting, and unlike many organizations where CIOs seem to be treated like the least popular people on Earth, everyone at SAP seems really happy to see her, although it’s possible they’re all a bit jacked up on the Coke and Red Bull littered around the boardroom table.

“This will be game-changing!” Arnold says as a piece of something or other launches, praising her team. SAP’s CFO later makes an appearance where he agrees that whatever it is they’ve made will “change the game.” It’d be great if we had any idea what game they were playing.

By the time Arnold goes home to her family (promptly at 6:00 pm, which seems pretty lucky for the day of a major go-live and a thwarted hacker attack), we’ve learned absolutely nothing about her approach to driving innovation, nothing about the way she prioritizes and manages her time, and nothing, really, about SAP that we didn’t already know. If you compare it to the recent video clip where Oracle’s CIO offered banalities about cloud computing, SAP’s IT leader testimonial is even more vapid.

The one thing I really liked about SAP’s multimedia CIO journey was Arnold’s smile, which she maintained throughout the day, making eye contact and behaving warmly to everyone she meets. Of course, if this is how smoothly and stage-managed it went for the average CIO, you’d see them smiling a lot more too.

Shane Schickhttp://shaneschick.com
Your guide to the ongoing story of how technology is changing the world
Previous article‘AirBnB’ for IT talent expands to Ontario to address skills shortage
Next articleDell, EMC combination needs to offer product roadmap clarity for CIOs