The Isreali startup Halio has released Hailo-8, its first AI chip made for computing at the edge, after two years of development.

In its press release, Hailo says that its new holistic chip has been designed to “rely on the core properties of neural networks”, which allows it to run deep learning applications at full scale more efficiently.

In its in-house benchmark, Hailo claims that its chips scored higher in the neural network benchmark ResNet-50 while consuming far less power compared to Nvidia Xavier AGX. It was able to achieve 672 FPS image inferencing while consuming 1.67W of power, equating to 2.8 TOPS (tera operations per second) per watt.

Currently, Hailo is looking to apply its Hailo-8 to all sectors of IoT with a focus on automotive. Aside from working with several major automotive manufacturers in their driver assistance systems, it’s also targeting the wearables, smart cities, drones, and smart homes market. 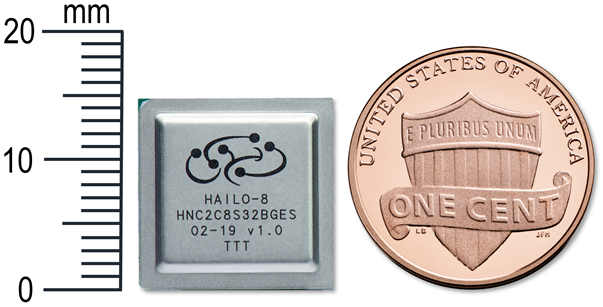 “In recent years, we’ve witnessed an ever-growing list of applications unlocked by deep learning, which were made possible thanks to server-class GPUs,” said Orr Danon, CEO of Hailo in its press release. “However, as industries are increasingly powered and even upended by AI, there is a crucial need for an analogous architecture that replaces processors of the past, enabling deep learning to run devices at the edge. Hailo’s chip was designed from the ground up to do just that. We are excited to help customers drive their intelligent devices to new limits. A new age of chips means a new age of technology.”

In June 2018, Hailo raised over $12 million in initial funding from a number of Israeli investor including Maniv Mobility and Next Gear, as well as funding from Hailo’s own chairman. In January 2019, Hailo reached over $20 million in funding after Chinese venture capital firm Glory Ventures joined its investor group roster.

The investment from the Chinese firm paves way for Hailo to enter the market in China and Hong Kong. Currently, Hailo is active in Europe, Japan, Korea, and North America.

Tom Li
Telecommunication and consumer hardware are Tom's main beats at IT World Canada. He loves to talk about Canada's network infrastructure, semiconductor products, and of course, anything hot and new in the consumer technology space. You'll also occasionally see his name appended to articles on cloud, security, and SaaS-related news. If you're ever up for a lengthy discussion about the nuances of each of the above sectors or have an upcoming product that people will love, feel free to drop him a line at tli@itwc.ca.
Previous articleHashtag Trending – Smart Cities Challenge conclusion; Apple Watch update; OCE Discovery
Next articleHP updates midrange EliteBook and ZBook with high-end features